A 2021 Enterprise Connect IT Hero Award winner oversees on-prem UC to cloud meetings/calling migration for 30,000 employees in short order, all the while maintaining her calm. 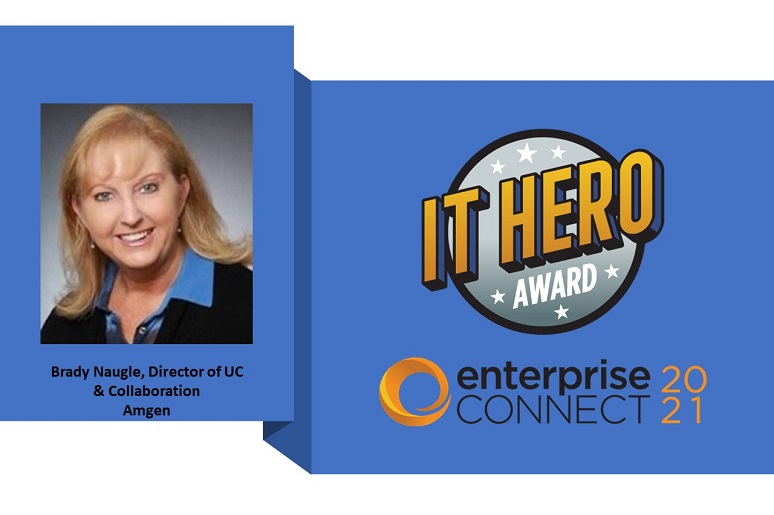 As global biotech company Amgen entered 2020, it did so with one of its big objectives being to take the disparity out of the meeting room experience. Little did it know just how fortuitous its decision to address this issue would turn out to be.
Like any large company, Amgen has a sprawling conference room estate. And while those conference rooms largely sit empty today, pre-pandemic they sure didn’t. Unfortunately, the reality back then was that the experience with the technology in these rooms often left people wanting, Brady Naugle, director of unified communications and collaboration at Amgen, shared in a No Jitter interview. To support meetings, Amgen had been using Microsoft Skype for Business on premises and Poly hardware, but the setups varied from room to room, and that meant figuring out how to join a videoconference was often challenging for employees, at best, she added.
Amgen set out to fix that. “We wanted people to be able to join the same way, whether from their cellphone, the conference, or their desktop,” Naugle said.
Following an RFP, Amgen selected Cisco Webex, which would let people join a meeting or make a call by “pushing the same green button” no matter the device or room environment, she said. With that decision, it set the migration from Skype for Business to Webex for August. Instead, with COVID’s arrival and shutdown in the Asia-Pacific region, her team soon realized it wouldn’t be able to wait that long.
Employees there reported an intolerable experience; because Amgen hosted its UC on premises, the video and voice calls for employees now working remotely had to traverse the home Internet, back to Amgen servers, and then out to the destination. “It was just a terrible experience; their calls were dropping, and they were getting one-way audio and video. The Internet [providers] had not caught up from a capacity perspective, and it was just a lot of struggle, period,” Naugle said.
And so, in March, Amgen fast-tracked the move to Webex. Considering Amgen’s videoconferencing infrastructure had been on prem, the move to remote work meant a “tremendous amount of change had to occur,” said Naugle, giving a nod to her internal team of 14 and her external managed services provider (MSP) for working so diligently and creatively to make the process as seamless as could be. Since it had already vetted cloud meeting providers and selected Cisco to move forward with, her team could “just really put our heads down and get to it.”
Starting in APAC and then moving on to other regions, the team completed the migration from Skype for Business to Webex for 30,000 employees in less than two weeks, Naugle said. With the MSP's help, that included standing up new portals with training materials in multiple languages, she added.
Naugle, who is one of our recently 2021 Enterprise Connect IT Hero Award recipients, earned kudos in her nomination for executing at a “very high level throughout this time of crisis,” all while maintaining focus on Amgen’s mission to serve patients, as well as her external sense of calm. “A global UC platform conversion is no small task,” the nomination reads, but under Naugle’s guidance, Amgen successfully shifted its video meeting infrastructure to the cloud “while managing through office closures, protests, and a rapidly changing work environment, including virtual meetings and events.”
Speaking to the rapid change, Naugle said, in her low-key style, “that’s been really interesting.”
Take, for example, the realization that while Amgen itself had decided on Webex as its meetings and calling platform, that choice didn’t always jibe with external collaborators such as the doctors, healthcare organizations, and government agencies that employees had previously met with in person. “They all have their specific tool they want to use,” said Naugle, noting as an example that customers in APAC seem to favor Zoom while Microsoft Teams is the preference in Europe.
That led her team to create an exception process, allowing the use of Zoom and Teams for employees who were required to do so for business reasons, Naugle said.
Another challenge — the biggest, Naugle said, in terms of the degree of difficulty — came from the need to support a constant stream of virtual events using Webex and not being in control of home Internet connections. Examples of such events include executive-led all-staff meetings that could have up to 3,000 people each; high-touch, high-visibility executive and director meetings; sales training; and external speakers brought in for special occasions. “And just when things kind of started to quiet down a bit on COVID, and we kind of got our feet underneath us, then the George Floyd murder happened,” Naugle recounted. “Amgen has taken a strong stand on diversity and inclusion … and so that started a new wave of high-profile meetings, all at a large scale.”
Fortunately, everybody was “extremely forgiving” in the early days of the Webex rollout and, ultimately, executives became some of the best champions of the technology, Naugle said. A year in, however, “we’re now at the other end of the spectrum, where they expect perfection,” even when the problems lay outside Amgen’s control. “We can’t have that perceived as being an excuse,” she added.
Meantime, Amgen has all the while been trying to plan its return-to-office strategy — and while Webex will factor into that, as per the original intent, rethinking is in order, Naugle said. For example, consider that tap-to-launch/get help green button. A year ago, that was a must-have. Today, it’s a nonstarter. A year ago, too, Amgen would have had no reason to monitor room occupancy or provide a mobile app for reserving a seat, Naugle said. “Then came COVID.”
This is the third in a five-part series of profiles on the 2021 Enterprise Connect IT Hero Award recipients.