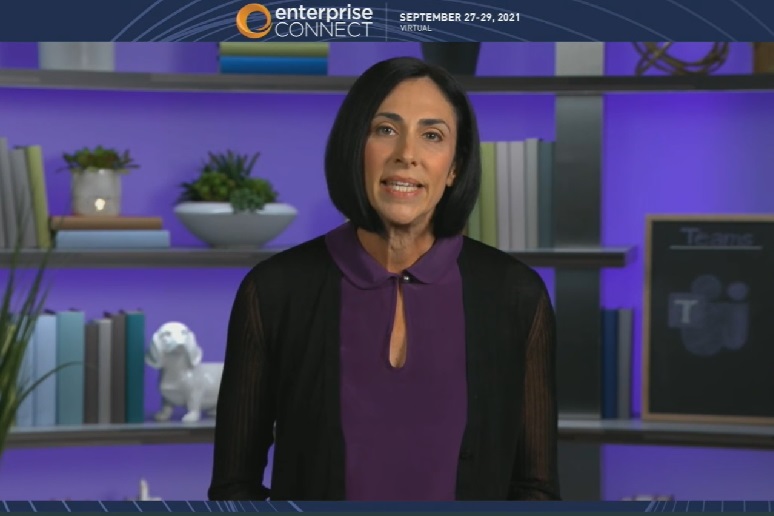 Like in years’ past, Microsoft took the opportunity to share its vision for communications and collaboration during its keynote presentation at Enterprise Connect, which opened today. Surprisingly, in this year of video meetings galore, voice service got significant attention from keynoter Nicole Herskowitz, GM of Microsoft Teams — who even quipped that she said the word “phone” more than two dozen times during her talk.
After recapping recent changes to video meetings like intelligent cameras and people recognition, Herskowitz turned her attention to voice services. First, she shared that the Operator Connect PSTN connectivity option introduced earlier this year will be GA this week. With Operator Connect, admins will have the ability to choose a Microsoft-certified operator partner, assign phone numbers to users, and set up policies for an enterprise within the Admin Center, Herskowitz said. Operator Connect will launch with a dozen partners, with more to follow in the coming months, she added.
Besides Operator Connect availability, Herskowitz discussed a slew of Teams Phone and voice service updates:
Separately, Microsoft unveiled several other voice updates in a blog post. They are:
Outside of voice-related enhancements, Herskowitz shared updates on Microsoft’s webinar capabilities. For example, teams will now be able to designate up to 10 webinar co-organizers. Co-organizers can manage event options and create polls, Herskowitz said. Additionally, Microsoft will revamp the webinar question-and-answer functionality, so organizers and presenters can mark best answers, moderate and dismiss questions, and pin posts like welcome messages, Herskowitz added.
Lastly, Microsoft will be a LinkedIn integrated preferred partner, which will allow teams to broadcast Teams webinars to LinkedIn directly. By adding the LinkedIn app to Teams, webinar hosts can schedule live events ahead of time and access real-time comments and reactions once the webinar is live, all within Teams, Herskowitz said.