For the first time, these three each earned a coveted spot in this report thanks to strong growth in UCaaS seats propelled by the pandemic. 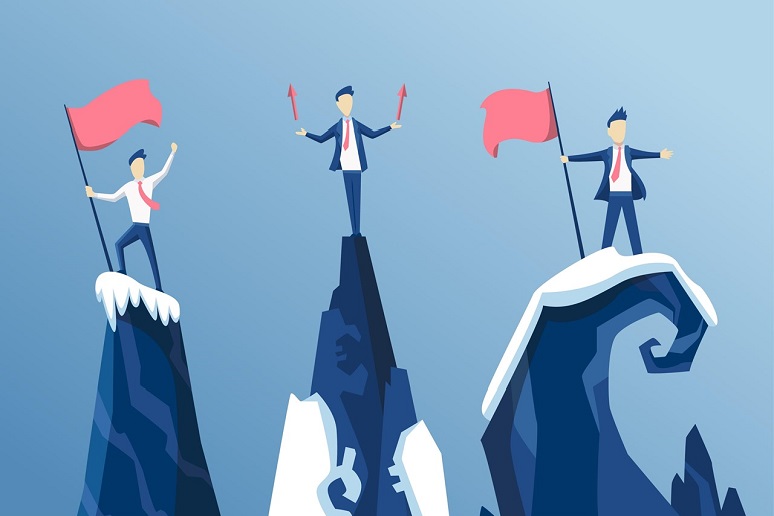 Image: the8monkey - stock.adobe.com
In Omdia's “UC as a Service (UCaaS) Scorecard: North America,” RingCentral sits atop the UCaaS heap based on the latest ranking from Omdia analyst Diane Myers — and it’s no surprise. But the presence of Cisco, Microsoft, and Zoom in the top 10? Now that’s an eye-opener — even to Myers herself.
While of course market shakeout is expected, the pandemic accelerated the change, particularly around Cisco, Microsoft, and Zoom, none of which have even been eligible for consideration in the report based on core voice seats, Myers shared in a No Jitter briefing. As she looked at core voice seats for 2020, Myers said she realized that Cisco, Microsoft, and Zoom had gained enough ground to have found a place among market share leaders. But it wasn’t after she had plugged in numbers for the other criteria she uses in putting together her annual UCaaS Scorecard for North America that she thought, “‘Oh wow. That’s really interesting!’” All told, their numbers for 2020 became significant enough to knock off companies that have been in the top 10 report for years, she added.
In putting together her scorecard, Myers first counts the number of UCaaS seats; as noted in the report, each of the top 10 providers had more than 875,000 seats (and a number of competitors had almost as many), with more than three million seats at the top of the market, she said. Then, she factors in financial stability, market share momentum, service development, and customer reviews. Previously, Cisco, Microsoft, and Zoom had fallen short of making Omdia’s top 10 UCaaS list because they were lacking on the requisite telephony piece, Myers said. Clearly, that changed over the past year, with an uptick in licensing for Cisco Webex Calling, Microsoft Teams Calling, and Zoom Phone. 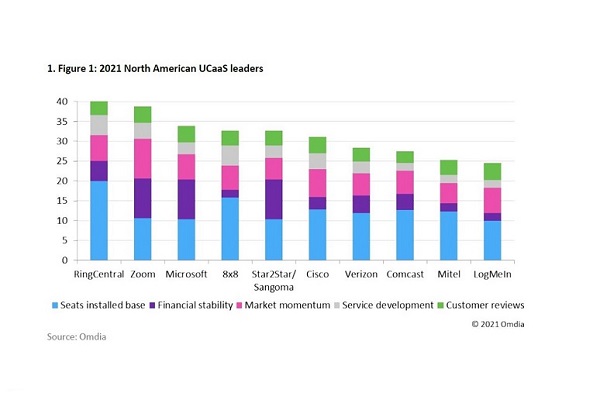 Since the pandemic, Microsoft and Zoom, along with RingCentral, “are always at the tip of someone’s tongue,” Myers said. “So the fact that those three did end up on top is validation that they’re doing the right things, she added. And, Cisco, with its sixth spot, is another reflection of the market, that the big companies are grabbing mindshare in UCaaS, Myers added.
Recapping the Foursome
Even with the shakeup, no other UCaaS provider comes close to market leader RingCentral, in terms of installed base and strategic partner development, Myers said in the report. Toward the latter end, the company has differentiated itself with key vendor and operator partnerships, and has focused on successfully launching its service with Avaya and Atos, with similar offerings in the works with Alcatel-Lucent Enterprise, Vodafone, and, most recently announced, Verizon, she added. In addition, RingCentral continued to set the bar with its investments around product enhancements and new capabilities, Myers said.
Zoom, which Myers said wants to be known as a platform provider rather than just for its cloud video service, is the seventh-largest provider in terms of installed seats for 2020, but it captured the number two spot overall particularly due to the strength of its financials and its market momentum, Myers said. While it isn’t as big financially as Cisco or Microsoft, it made large strides in mindshare because of all the video meetings that took place last year, she added. Not only is Zoom no longer simply a side player, but it is also growing faster than any other UCaaS provider in terms of seats, she noted.
Zoom entered the UCaaS market in 2019 when it launched Zoom Phone, which has seen above-average growth in 2020 as employees worked from home, Myers said. The number of new seats Zoom added for its phone service “continues to blow me away,” Myers told me.
Microsoft ended up eighth overall in terms of installed base, with less than two years under its belt as a full-fledged UCaaS provider — i.e., voice service included — thanks to the skyrocketing use of Teams during the pandemic for calling and as a PBX replacement, Myers said. Its score of 10 for financial stability, along with a high rating for customer reviews, helped boost the company into the third position overall.
Despite Microsoft’s strong performance in 2020, the path forward with its voice service isn’t straightforward, since the many different options it offers make implementation complex, Myers said. For example, enterprises that have a Microsoft 365 E5 license can enable PBX capabilities and get PSTN connectivity from a carrier via Microsoft Direct Routing and use their own or hosted session border controllers (SBCs), Myers said. Or, with the recently introduced Operator Connect option for Teams, they can take advantage of a fully managed option from certified partners.
To earn its above-mentioned sixth spot overall, Cisco comes in with the third-largest installed base, plus above-average market momentum and positive product development and customer review scores. Notably, in 2020, Cisco integrated calling, messaging, and meetings — complete with built-in meeting notes, transcription, real-time translation, and noise cancellation — in a single interface, Myers wrote. Cisco also has an advantage in that it designs and delivers its own Webex-optimized devices, she added, noting Control Hub, for Webex administration and management, as another big development focus in 2020. Additionally, Cisco has accelerated the sale of its Webex suite through VARs with the transition to cloud across its Unified Communications Manager (UCM) on-premises base, Myers said.
Rounding Out the Scorecard
Based on the criteria mentioned above, here’s a summary of the additional leading UCaaS providers in North America according to Omdia’s 2021 report and listed in order of scorecard ranking:
Others to Watch
Among UCaaS providers that didn’t make the scorecard but are worth watching based on factors such as product innovation, channel strategy, and customer service are CoreDial, Dialpad, Fusion Connect, Fuze, Intermedia, Intrado, Lumen, Masergy, NetFortris, Nextiva, Ooma, Vonage, and Windstream.
In terms of competitive positioning, Myers said she required granular data from each provider because the numbers were so tight, with just thousands or even hundreds of seats making the difference for some companies.