Industry thought leaders question the necessity of interoperability among UC systems in an app-in-a-flash, communications-enabled universe.

Get seven big vendors on the stage, and the talk is always going to get around to interoperability pretty quickly. That's generally been the case with the Monday UC Summit at Enterprise Connect, and this year was no exception -- though the conversation took a markedly new shape.

With a standing room-only crowd, this UC Summit was the first general session of a show that started out with jam-packed breakout sessions on contact centers, UC user adoption, WebRTC, and deskphones (yeah, deskphones) -- among others. The diversity of popular sessions suggests the breadth of challenges facing enterprise decision-makers -- from that chunk of plastic on the desk to the standard that puts everything in a Web browser that the old workhorse deskphone used to provide.

When it comes to the topic that dominated the UC Summit, interoperability used to be about make Vendor A's stuff talk to Vendor C's stuff and then Vendor M's stuff. But people are increasingly consuming communications applications in new ways, and some panelists suggested that this may make the solution to the interoperability challenge different -- or maybe eliminate the challenge altogether.

Rowan Trollope, senior vice president and general manager of Cisco's Collaboration Technology Group, quoted his CTO, Jonathan Rosenberg, who coined an axiom: "Virality is the new interoperability." By which he means that if you need to collaborate with someone and you don't use compatible tools, you just agree to both get onto the same tool -- presumably one that's gone viral and acquired some level of credibility as a result. What this leaves you with is a situation like Trollope said he has --179 apps on his smartphone, 15 of which are messaging apps, some of those having only one or two people with whom he regularly communicates. And that's just how things are in the new world.

Adam Swidler, technology evangelist for Google for Work, echoed this point, describing the "disintermediation of services" that's happening, driven by mobile usage patterns. He pointed out that Facebook responded to user demand by splitting out its Messenger app, and said Google was following the same pattern in splitting Hangouts from Google Plus.

"The users have spoken, and what they want is very simple, very purpose-built apps," said Swidler, whose appearance marks Google's debut on the Enterprise Connect main stage -- itself a statement of how things are changing. 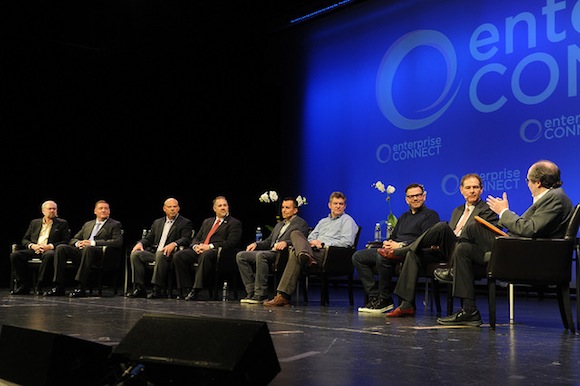 Likewise, Josh Haslett, vice president of systems engineering at Mitel, said the game is changing for traditional vendors that have wanted to control the endpoint since the days of proprietary telephone signaling protocols. "I don't think taking desktop real estate and branding it is going to be the answer," Haslett said. "It's not about branding, it's about enabling."

Gary Barnett, senior vice president and general manager, Engagement Solutions, at Avaya, agreed. "The user interface is not what to us will be relevant," said. Instead, Barnett stressed that the role of platforms like Avaya's will be to tie together various elements on the back end -- a critical aspect that won't just go away in a viral-app world of the future, for (at least) one key reason: investment protection, aka the installed base.

A case in point came from Zig Serafin, corporate vice president, Skype Business Services at Microsoft, who pointed out that he and Cisco's Trollope were meeting this week and had already reached agreements between the two companies to allow video from Cisco Telepresence endpoints to be dropped into Skype for Business (formerly Lync) video conferences. So if Cisco and Microsoft are talking interoperability -- at all -- it could be a sign that things are changing (we can hope).

So whether you need interoperability among different vendors or different generations of products from the same vendor -- and let's face it, enterprises today still do -- the UC vendors you've been used to dealing with are prepared to at least make some of the right promises and recognize that these challenges haven't gone away even in the new world.

But Google's Swidler offered a harsh assessment of the pursuit of interoperability.

"The more you invest in interoperability today," Swidler said," the longer you're going to be stuck with that legacy platform."

This UC Summit offered a bonus: All four of this week's Enterprise Connect Orlando 2015 keynoters were among the panelists. Avaya's Barnett and Cisco's Trollope take the keynote stage tomorrow, while Microsoft's Serafin and Google's Swidler are on tap for Wednesday morning.