Teams Phone System: Back to Call Feature Drawing Board

With three telephony solutions now in Microsoft's portfolio, let's try to get a better feel for which offer what PBX features.

It's awkward in part because this time last year Skype for Business Online Phone System (then called Cloud PBX) was in much the same spot as Teams is in today. Positioned as the centerpiece of Microsoft's UC strategy, Cloud PBX had a small but growing set of telephony features. And a full decade ago an ancestor of Skype for Business Server underwent the same messaging app-to-telephony solution transformation.

With three separate telephony solutions now in Microsoft's portfolio, let's geek out on PBX features and try to get a better feel for which offer what. Because even under its current product development trajectory, Teams Phone System won't be on par with Skype for Business calling, of either the Online or Server variety, for quite some time.

The best source of information about Teams Phone System call features isn't the most obvious. While Microsoft's mid-December blog, from Paul Cannon, a senior product marketing manager, is undoubtedly informative, it omits a number of features -- such as call blocking, E911, and support for existing calling plans -- that the Teams roadmap indicated would be delivered by the end of last year. Better to check the Office 365 Roadmap site, which on Dec. 28, 2017, quietly moved all Teams Phone System call features scheduled for late 2017 delivery from "in development" to "launched" (see list at right). 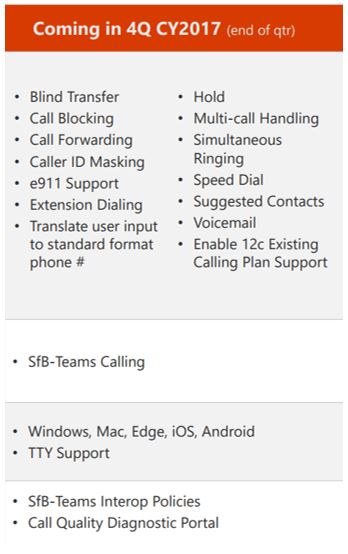 So by all appearances Microsoft is right on track. The first batch of call features that were supposed to be added by now have been added. Reading Paul's blog closely even reveals a bonus feature. Microsoft hadn't called out call history in either the Teams roadmap document or the Office 365 roadmap site, but according to Paul it's now available in Teams.

Not slipping on deliverables is a good -- even vital -- sign. Microsoft's UC aspirations hang on a service that, until the past few weeks, had no telephony capabilities whatsoever. It's as important that Microsoft adheres to its Phone System R&D promises as it is that the company stops completely reworking its UC strategy every 18 to 24 months.

But how does Teams Phone System's nascent set of call features compare with those in Microsoft's other UC solutions? How close is Teams to feature parity with them now? And where will things stand if Microsoft continues to fulfill promises made in the Teams roadmap?

I haven't been able to find anything that directly compares the three solutions' call features. In fact, it's surprisingly difficult to find a single document from Microsoft that provides a comprehensive, up-to-date list of call features in either of the Skype for Business offerings.

Skype for Business Online Phone System's product page lists its features, and the admin guide provides more detail. But both seem to be incomplete. For example, auto-attendant and call queues are listed in the latter, but not the former despite their being introduced almost a year ago. And it looks like TTY, forward to group, and caller ID masking -- each of which either is or soon will be part of Teams Phone System -- are supported in Skype for Business Online, despite not being called out on the product page.

And I'll be darned if I can find an up-to-date list of Skype for Business Server Enterprise Voice features. I'm sure it's floating around on TechNet somewhere, but so is a lot of very dated data... from 2010, 2009, and earlier.

So drawing from various TechNet materials, files I've collected over the years, and a very handy matrix from Enabling Technologies, I cobbled together this chart:

However, even if Microsoft adds everything on the roadmap, Teams will still lack a number of features currently in Skype for Business Online Phone System. These include camp-on, device switching, and music on hold. And it will likely be some time before Teams Phone System approaches feature parity with Skype for Business Server Enterprise Voice, which has a full decade of product development efforts backing its comparatively full call feature set.

All said, Teams Phone System is off to as good a start as Skype for Business Online Cloud PBX had a couple years ago. It has a small, but growing, set of call features that -- given time -- will allow its positioning as a viable UCaaS service. As it matures Skype for Business Online Phone System will likely suffice for the growing number of Office 365 customers looking for Microsoft-delivered UCaaS here and now.

Learn more about Microsoft's Skype for Business and Teams strategy at Enterprise Connect 2018, March 12 to 15, in Orlando, Fla. Register now using the code NOJITTER to save an additional $200 off the Advanced Rate (deadline extended to Friday, Jan. 19!) or get a free Expo Plus pass.

Justifying Workspace Applications: Time to Up the Game

Communication technology vendors and their value-adding partners must take the lead in defining business justifications for their collaboration and workspace applications.