CafeX Says ‘Challo,’ One Company to Another

Rolls out an all-in-one platform and security framework for easing multicompany collaboration. 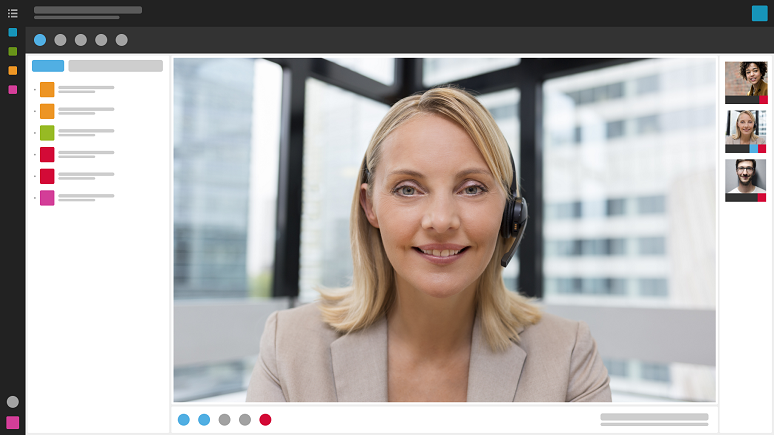 The team collaboration market has one more entrant as of today, with CafeX Communications taking the wraps off a persistent multimode workspace app it calls Challo. CafeX has set to differentiate itself in this crowded field with a purpose-built cloud app that it is positioning as a means of allowing employees to collaborate as easily with external parties as they do internally.
Security, simplicity, and delivery in an all-in-one cloud platform are the three tenets CafeX followed in developing Challo, said Sajeel Hussain, chief revenue officer for CafeX, in a No Jitter briefing.
Challo, which stems from the Indian word meaning “Let’s get going,” is the latest step in the company’s evolution as a communications provider, Hussain added. That evolution began more than a half dozen years ago, with a WebRTC-based mobile engagement product for which CafeX won the 2014 Best of Enterprise Connect Award, and brought forward along the way a variety of engagement-related products, from meetings software to live agent assistance for contact center deployments.
Like most team collaboration tools, Challo supports team messaging, voice and video meetings, content sharing and management, and application integration in persistent team workspaces, pulling together CafeX point products into an all-in-one platform, Hussain said. “Challo is the culmination and evolution of all those point products,” he added. Team workspaces within Challo are always-on and available to access throughout the duration of a business project.
Challo’s market differentiator is the security and compliance framework CafeX has wrapped around the platform in support of seamless multicompany collaboration without worry, Hussain said.
With Challo, IT administrators can set granular policies for content access, allowing some individuals to receive but not send data or enabling team messaging but not content sharing for a group, for example. External users keep their corporate identities, and maintain the same privileges as internal team members, Hussain said. This includes the ability to capture collaboration sessions, meeting recordings, and transcripts for IT visibility and control as well as auditing — a different approach to the guest mode or shared channels supported by other collaboration providers, he added.
In addition, companies using Challo have the option of storing their data on their own or using encrypted storage from CafeX, Hussain noted.
And, in a nod to the presence of other team collaboration apps within the enterprise, Challo connects to chat channels in Slack and Microsoft Teams. This means a Challo message can appear in Slack or Teams, and vice versa, with Challo acting as a bridge among all three applications, Hussain said.
As a greenfield initiative, Challo gave CafeX to break away from the rigid multitenant-based security models of earlier cloud-based collaboration apps, said Kevin Glass, CafeX CTO, in the briefing. Initially providers “went to a lot of trouble — and rightly so at the time to get people to move to the cloud and to prove that it could be secure and to show how tight the lines between tenants were —to put up great big brick walls between them,” he explained.
But over the years, enterprises have come to trust the cloud, and now Company A wants to be able to communicate with Company B. “That's where collaboration is, especially with the gig economy. … They want to be to communicate, and now we’ve got to get through those brick walls.”
A browser version of Challo is available for a free trial, and an iOS app is available in the Apple App Store.