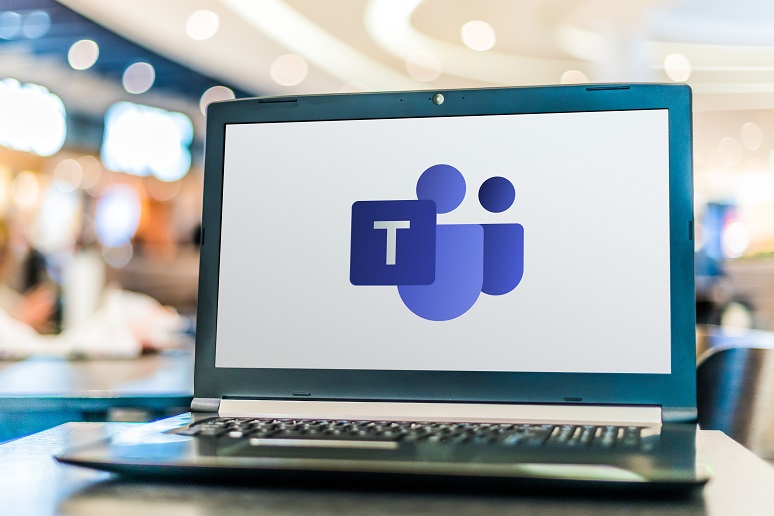 Image: monticellllo - stock.adobe.com
During the latest Microsoft earnings call, Satya Nadella, chairman and CEO, announced, “We are nearly 250 million monthly active users as people use Teams each day to communicate, collaborate, and [share] content.” Nadella further noted, “We have nearly 80 million monthly active Teams Phones users.” These are impressive large numbers, but what do they mean for Microsoft Teams now and for the future?
Impressive Growth
The growth of Microsoft Teams has been noteworthy. First launched in November 2016, Teams grew to 13 million daily active users (DAU) by July 2019 and then to 145 million DAU by April 2021. The trajectory has clearly been onward and upward (see graphic below). 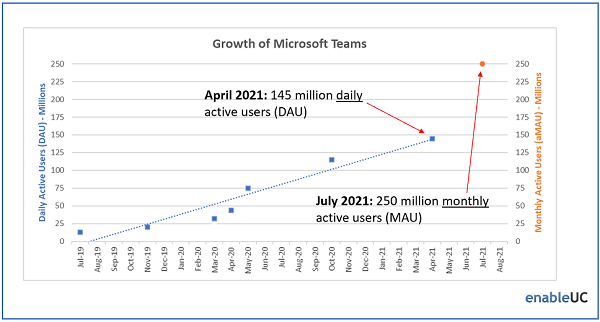 Microsoft has fueled this growth through constant innovation and adding features. In the last year, 245 new features have launched, 78 new features are currently rolling out to customers, and an additional 175 are under development, per the Teams Roadmap.
Healthy competition from Zoom also played a role, driving multiple rapid advancements in video meeting capabilities. Most noteworthy, we saw Teams rapidly expand from basic 2x2 video (March 2020) to mediocre 3x3 video (May 2020) to Zoom-matching 7x7 video (August 2020) to the unique and innovative Together Mode (December 2020) extended by the ability to create custom scenes (July 2021).
Given the regular increase in DAU, why then change to reporting monthly active users (MAU)? There are many potential reasons:

It’s unlikely Microsoft expected to shift from reporting daily active users to monthly active users without anyone noticing. As such, options two or three above are much more likely than option one. It would be helpful if Microsoft both explained the shift from DAU to MAU reporting and how they determine a monthly user is active.

Teams Phone and the E5 License
Microsoft Teams can serve as an enterprise-grade PBX for many organizations and support all key calling requirements as well as E911, including being compliant with Kari’s Law and Ray Baum’s Act.
Microsoft supports connecting Teams to the PSTN either directly through Calling Plans, where Microsoft serves as the carrier (available in 28 countries), Direct Routing with either an on-premises session border controller (SBC) or a hosted virtual SBC (aka, Direct Routing as a service), and soon its Operator Connect service, which is currently in preview.
On the earnings call, Nadella noted that the 80 million monthly active Teams Phone users made “total calls surpassing one billion in a single month this quarter.” One billion is a big number but only represents an average of 12.5 calls for each of the 80 million Teams Phone users, less than one call placed or received per day.
Over the past 18 months, Microsoft has given a concerted push to adding Phones (PSTN calling) to Teams. From a Microsoft perspective, adding calling capabilities to Teams is likely aligned with the push to encourage organizations to step up from an E3 to an E5 license, given that phone system and audio conferencing are the biggest end-user differences between the license levels. Microsoft has enjoyed some success with this approach, reporting “Demand for Microsoft 365, particularly for security, compliance, and voice drove strong E5 momentum again this quarter. E5 now accounts for 8% of our Office 365 Commercial installed base,” up from 5% in FY2020.
The push to add calling to Teams has also created a significant opportunity for partners who assist organizations in planning and migrating from legacy PBXs to Teams as a complete PBX.
Teams as the Information Portal and Automation Platform
As capable as Teams can be as an enterprise phone system, 170 million of the MAU of Teams currently do not use the Teams Phone capability. This is either a huge opportunity for Microsoft and its partners (perhaps) but likely an indicator that PSTN calls are no longer the primary method of communication either internally or externally. When a PSTN call is required, many individuals turn to either their personal or company-supplied mobile phones.
As such, Microsoft and its partners are rightly focusing on Teams as the primary information portal and automation platform for workers. As Nadella describes, “Microsoft Teams is the new front end. It's where people meet, chat, call, collaborate and automate business processes all within the flow of work.” Nadella further noted that “Teams has become a platform. Not just for Dynamics. Even for Salesforce, for SAP, for Adobe, for ServiceNow — they’re all building great integrations into Teams and will foster that.”
Microsoft emphasized during the recent Inspire conference the push towards surfacing information directly in Teams when they announced the ability for “anyone in an organization to view and collaborate on Dynamics 365 records, from within the flow of work with Teams—at no additional cost.”
At Inspire, Microsoft also further demonstrated its new Microsoft Viva customer experience platform, which is “experienced primarily through Microsoft Teams” via a Teams app integration.
Advances in the Power Platform toolset, which includes Power BI, Power Apps, Power Automate, and Power Virtual Agents, allow citizen developers via low-code approaches to analyze and display information and automate business processes, all within Teams. These process automation capabilities are now more likely to drive future growth of Teams as opposed to the focus on Teams voice.
Effective Use of Teams?
With 250 million people using Teams every month how many are making effective use of Teams? A recent Unified Communications & Collaboration (UCC) Training and User Adoption study I co-authored with Blair Pleasant for BCStrategies suggested not many. The study found 64% of users felt they were not aware of all the features and capabilities of their UCC solution, and 71% of users believed they would be more effective with additional training.
This suggests a huge training opportunity for as many as 160 million users (64% of the 250 million MAU) with the potential to increase the effectiveness of 177.5 million users. IT professionals and Microsoft partners should take note of this.
This article was originally published on August 2, 2021 (click here for the original article).