Virtual and augmented reality is livening up the collaboration space, and it’s about time. 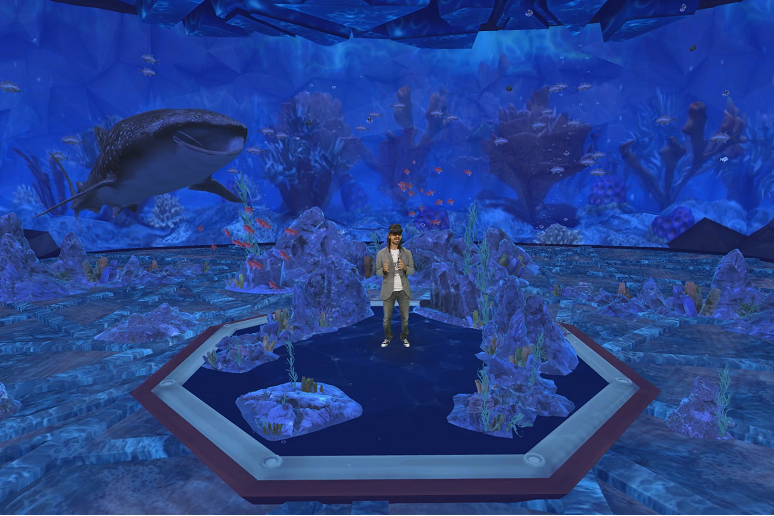 I honestly didn’t know what to expect when I donned my Oculus Quest 2 virtual reality (VR) headset and entered the event space for Microsoft Ignite 2021. I certainly didn’t expect 3D whale sharks, a giant squid, a hologram of James Cameron, or dancing with Cirque du Soleil co-founder Guy Laliberte. I had no idea I’d be dazzled by the experience of a keynote truly optimized for VR; one future keynoters will be challenged to match.
But that is what I encountered in the VR version of the Microsoft Ignite keynote, hosted in AltspaceVR. You might be asking yourself: What do augmented and virtual reality have to do with unified communications (UC)?
Until this week, they had little in common; AR and VR were separate from UC applications. But with the announcement this week of Microsoft Mesh, Microsoft is beginning to take AR/VR to the next level by integrating them with key collaboration and business applications. The announcement of Microsoft Mesh, in essence, bring virtual and augmented reality into UC.
This announcement is a big deal — collaboration is a key ingredient to fully unleashing the power of digital transformation. Microsoft Teams is a great tool, but its power comes from connecting team members, not just the application itself. Likewise, you can do great things with augmented reality today, but the collaborative functionality makes it exponentially more powerful. But Microsoft already has the business apps to connect to, which is an important differentiator. One of the frustrations of virtual reality today is VR connections don’t exist outside of VR. Facebook will fix this in the consumer space when their Horizon VR world is finally released, but for the business world, we need platforms that can integrate AR/VR with existing platforms like Microsoft Teams — that is what Mesh does.
Going beyond integrating with apps, Mesh will also support users collaborating on different AR/VR devices. Mesh support isn't limited to HoloLens, as it supports Facebook Oculus, Apple Mac, and mobile devices. With no limits on the apps, developers can create apps using the best devices for specific users and use cases. I was initially surprised to see this level of cross-platform support, as Microsoft has been historically slow to support competing platforms. But this is a different Microsoft in a different world — the incentive is to be on as many platforms to drive traffic to the underlying Azure services.
Microsoft hopes that the development community with a Mesh SDK will build out the apps of the future that will combine AR, VR, and traditional communications methods and business applications. One of the case studies presented involved a remote technician application that leverages Teams voice and video functions, such that they didn’t need to build their own communication channel for the app. This approach should stimulate a lot of app innovation, as developers don’t have to reinvent the wheel for every aspect of their AR/VR application.
For this strategy to be successful, Microsoft would have to already have the key components in place. Microsoft Teams is a huge success for business communications and is maturing into a market leader. The HoloLens 2 is a leader in augmented reality headsets, Facebook is talking about AR, Apple is rumored to jump into AR in 2021 or 2022, but Microsoft is already doing it. AltspaceVR, which Microsoft rescued a few years ago, is a standout VR platform for events and networking. AltspaceVR recently began to support Microsoft account login, signaling tighter integration in the future.
Another interesting aspect of Mesh is the connection between AR and VR. Most people assume AR and VR go hand in hand, but they are different technologies with different use cases. The announcement of supporting AV and VR integrations shouldn't be overlooked, as the seamless linking of the physical and virtual worlds will be crucial to a future hybrid-work strategy.
The innovation with the HoloLens and augmented reality, along with their acquisition a few years ago of AltspaceVR, culminating with the announcement of Mesh, demonstrate Microsoft isn’t satisfied just to catch up with the cloud providers of today, but have their sights set on the future — a future that is already unfolding with them in a leader position.