Examining the Trends: Business Chat in 2018 For the past couple of years, we’ve been covering the rise of team collaboration applications, which some believe to be on course to replace the UC apps of yesteryear. Results from a recent Spiceworks study of 901 IT professionals across North America and EMEA bear this out.
The study looked at adoption of business chat apps for real-time collaboration -- some of which offer functionality like video conferencing and social features in addition to simple chat. In Spiceworks’ 2018 study, 58% of small businesses (fewer than 100 employees), 61% of mid-size businesses (100 to 499 employees), and 70% of large businesses (500 or more employees) indicated they are using collaborative chat apps. This uptake shows considerable growth over the numbers reported in Spiceworks’ 2016 study, which showed 42% of small businesses, 38% of mid-size businesses, and 53% of large businesses were using collaborative chat apps.
Microsoft Teams Bests Slack
The study results reveal a shift in which team collaboration app provider is leading the market. As the chart shows below, Microsoft Skype for Business continues to hold the number one spot in collaborative chat apps, growing from 36% adoption in 2016 to 44% adoption in 2018. However, adoption of Microsoft Teams has jumped considerably. Twenty-one percent of businesses surveyed are using Teams today, up from 3% in 2016. It should be noted, however, that the official release date for Teams wasn’t until early 2017, so the 3% indicating use of Teams in the 2016 study was during the pre-GA period. This rise in adoption bumped Microsoft’s competitor Slack to the number three spot, due to only modest gains in adoption over the two-year time period.
Peter Tsai, senior technology analyst at Spiceworks, attributed the rise in Teams usage to its availability at no additional cost to Office 365 users. “Although Skype for Business has maintained the lead overall, Microsoft is putting more of an emphasis on Microsoft Teams as the default communications app for Office 365, which is enticing organizations to give it a try,” he said in a prepared statement. Interestingly, despite naming many large enterprise wins with the likes of Walmart and Campbell’s, Workplace by Facebook adoption remained stagnant over the two years. Google Hangouts, on the other hand, saw an uptick in adoption within the large enterprise segment, from 11% in 2016 to 18% in 2018 -- despite an overall drop in the same period. As the chart shows below, Teams and Skype for Business are more popular in large enterprises than in mid-size and small businesses. Contrast this to Slack, which is most popular with small businesses, while large enterprises represents its smallest segment of users. 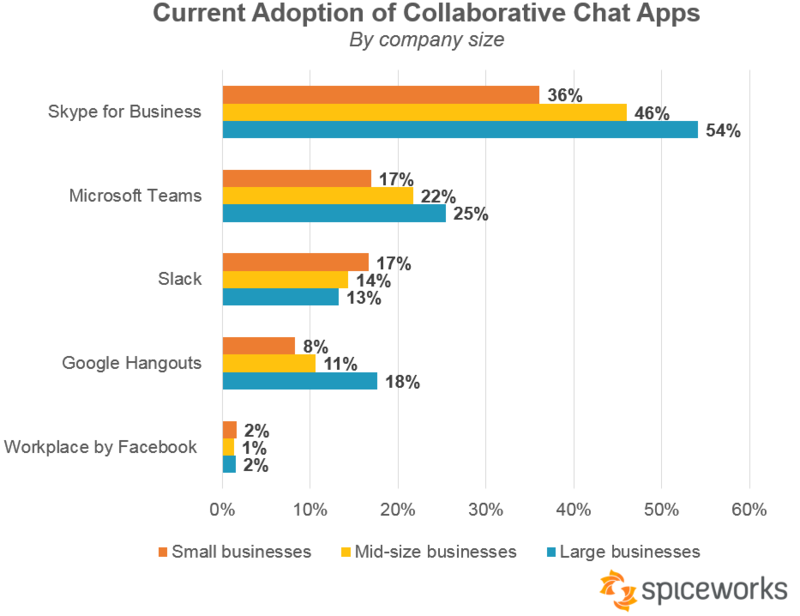 Brand Perception
Slack is considered a more innovative chat app when stacked up against its competitors, according to IT professionals who have deployed chat apps in their organizations. Microsoft Teams, on the other hand, was identified as the leader for security, manageability, and cost-effectiveness; Skype for Business leads in reliability, compatibility, and user-friendliness. Slack actually ranked second in terms of user-friendliness, followed by Google Hangouts and then Microsoft Teams.
Future Adoption: Predicting Trends
The Spiceworks study also asked respondents to share their enterprise’s plans for future adoption, and the results suggest that Teams will grow the most over the next two years. By the close of 2020, 41% of organizations expect they will be using the Microsoft team collaboration app, while 18% of organizations expect they will be using Slack.
With Microsoft’s strategy to make Teams the primary client for meetings and calling in Office 365, replacing Skype for Business in that role, there could be even bigger shifts in adoption on the horizon as Skype for Business users ultimately migrate away from the platform.