Cisco is certifying its devices for Microsoft Teams – but don't think this is the end of Cisco Webex. 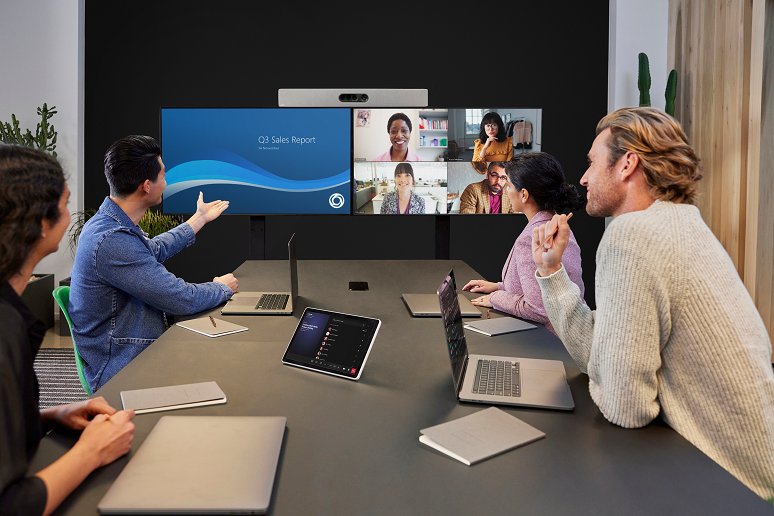 Image: Cisco
At the Microsoft Ignite event today, Cisco and Microsoft announced a new partnership that'll bring native Microsoft Teams interoperability to Cisco Room and Desk devices, marking the first time that Cisco devices will be certified for Microsoft Teams.
Starting in early 2023, six Cisco meeting devices and three peripherals will be certified for Teams. The first wave of devices will include the Cisco Room Bar, the Cisco Board Pro 55-inch and 75-inch, and the Cisco Room Kit Pro, followed by the Cisco Desk Pro, and Cisco Room Navigator. For peripherals, Cisco announced the Cisco Desk Camera 4K will be released by the end of October, and two headphones with Teams buttons will be available by early 2023.
Enterprises that purchase these devices will have the option to default the experience to Microsoft Teams Room or the Webex meeting experience. Additionally, all the devices will be manageable in the Teams Admin Center, the Teams Rooms Pro Management Portal, and the Cisco Control hub device management.
"Interoperability has always been at the forefront of our hybrid work strategy, understanding that customers want collaboration to happen on their terms — regardless of device or meeting platform," said Jeetu Patel, EVP and GM of security & collaboration for Cisco. "Our partnership with Microsoft brings together two collaboration leaders to completely reimagine the hybrid work experience."
Cisco Has Not Given Up on the Video Meeting Race
While “some people might look at it as a capitulation by Cisco” on the video conferencing side of things, Omdia analyst Brent Kelly doesn’t think that’s the case.
“Cisco has several different revenue streams. One, of course, is from Webex meetings. But another revenue stream is from the devices,” Kelly said. “There are different ways to generate revenue…, and if they want to increase the revenue from their devices, this is an awesome way to do it.”
Since many enterprises were already moving to Microsoft Teams, Cisco is now able to capitalize on this adoption by offering its devices through Microsoft’s partner program. Not only does this mean that enterprises now have another vendor with a “proven track record” to purchase devices from, but Microsoft software shops that might use Cisco for other things like networking might be able to take advantage of bundle deals, Kelly said.
Addressing the larger competition between these two companies, Kelly noted that this isn’t the first time that these two tech giants worked together and that their “frenemy” posture will likely continue in the future, and the companies will find other areas where they can collaborate and compete, depending on what works for each company. Before this announcement, Cisco and Microsoft collaborated to allow Webex device users to join Microsoft Teams calls. However, the Microsoft Ignite announcement takes that capability further, and Cisco devices can now “become real Microsoft Teams Room concept devices and … [they can] hone into the Microsoft Teams servers natively.”
“They've had cooperation a number of times in a lot of different things before, but they’ll still compete. Cisco Webex, it's a great tool; Microsoft Teams, it's a great tool, and they're going to compete there,” Kelly said. “But where they can cooperate like [when] Cisco makes great devices [and] Microsoft’s customers need great devices, why not work together?”
While this deal seems like a win-win, several details on the partnership still need to be ironed out, especially around the licensing and management side of things, Kelly said. While the press release mentioned that Cisco devices can be managed from either vendor side, “Cisco's control hub is going to have far better management capabilities of those devices out of the box," Kelly said. However, "it may be that you have to use Microsoft as well to even enable those [devices],” Kelly explained. This could create a situation where an IT admin might need to use two tools to manage a single device, he added.
Given their competition in the video conferencing and team collaboration space, it might seem strange for Microsoft and Cisco to work together on anything — we shouldn’t be completely shocked if they find another area or two where they can work together on. Just don’t count on Cisco abandoning Webex anytime soon.