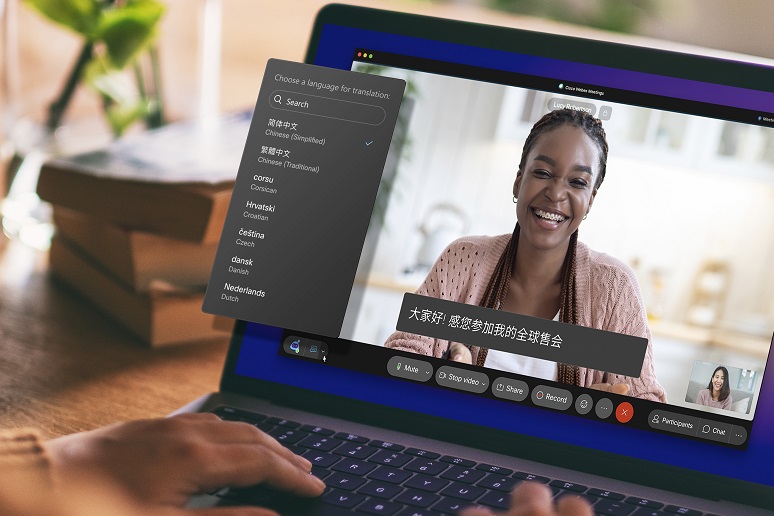 We've all had those meetings where we have a hard time understanding someone either because of poor audio quality or background noise like dogs barking or Amazon drop-offs. But what if the barrier to understanding someone and collaborating with them had less to do with their surroundings or technology and more to do with the language they speak? Cisco hopes to solve this problem for Webex users with its real-time translation feature, headed to public preview beginning this month.
Cisco has expanded language support from 10 to nearly 100 for the Webex real-time translation service introduced last December. The Webex feature translates a meeting participant's English into one of 108 languages, including Arabic, Dutch, French, German, Japanese, Korean, Mandarin, Russian, Spanish, Danish, Hindi, Malay, Turkish, Vietnamese, and others, Cisco said in a press release. And since Cisco employs machine learning to handle the translations, this means the capability will continuously improve over time, Jeetu Patel, SVP & GM, Cisco Security & Applications, explained during a Cisco media pre-briefing. Following the public preview, the feature will be generally available in May, Cisco said.
While the feature might seem to be a nice-to-have, a translation service can create a more inclusive collaboration environment and help build stronger work relationships, Patel said. For example, real-time translation can make meeting participants more comfortable with the conversation and more confident about speaking up themselves, he added. Empirically, data from IT research firm Metrigy shows the potential value of real-time translation; as Cisco noted in its press release, Metrigy has found that 24% of meetings include at least one or more participants for whom English is not their native language. Anecdotally, Patel shared a personal note about how he sees the benefit of real-time translation for his 82-year-old mother, who as a non-native English speaker gets discouraged and nervous in situations where she has to speak with native-English speakers.
Real-time translation is among other Webex changes planned around creating a more inclusive experience, Patel said. While he didn’t provide specifics, he noted how video layout “will change quite a bit over the course of the next few months” and that users will have more video layout customization options. Additionally, Patel mentioned that Cisco will be bringing more enhanced analytics and insight to facilitate hybrid working and the return to the office.
These Webex changes are in part a response to the transformation of work over the last year, as well as a way to help IT leaders ensure that hybrid working doesn’t create a two-class system (remote vs. in-office workers). In thinking about Webex, Cisco has asked itself, “When there's a group of people together and there's some people that are not together, how do you make sure that … everyone has an equal voice in a meeting?” Patel said. Part of accomplishing this is ensuring employees have the right technology; the other part is making sure employees feel valued and understood — regardless of what language they speak.