Talking Video and CEBP with Avistar

What happens if Communications-Enabled Business Processes succeed? Network chaos, is one possibility.

If real-time, delay-sensitive voice traffic starts creeping into the business applications that don't currently make this kind of demands on the network, do you end up with the worst of all worlds? That is, unpredictable, bursty data applications using predictable but highly demanding voice apps? And then--what if these data apps aren't just using voice, but also bandwidth-sucking video, too?I got the beginnings of an answer to this issue--admittedly, one that enterprises aren't facing yet, but very likely could if CEBP takes off--when I spoke today with Stephen Epstein, chief marketing officer at Avistar, a San Mateo, CA-based company whose calling card is desktop video, but which really tries to look deeply into the issue of video performance.

Stephen explained that Avistar initially sold its desktop video system largely into the financial services vertical, wisely diversifying from this niche just before the economic crash doomed so much of that industry last year. But in the course of building solutions for financial services, Avistar ran up against the need to prioritize video streams within the system; the classic case, as Stephen Epstein explained it, was a video "town hall" being run by the corporate leadership, which needed priority over random one-off video usage, such as traders talking to the research department.

So Avistar developed its C3 Command bandwidth management product, which communicates with endpoints and monitors their quality of service metrics, and throttles back service to video users deemed lower priority--"commanding the endpoint how to behave," as Stephen Epstein put it. This bandwidth management system provides the foundation for the Avistar system, as shown below: 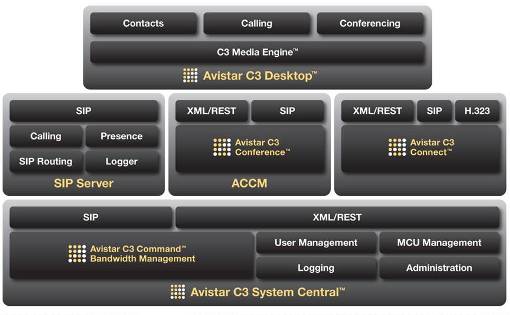 Avistar has gone from the idea of pitching prioritization among dedicated video usage, to promoting the idea that you'll need this kind of prioritization and bandwidth management if video becomes integrated into your line of business applications. Obviously, such business-critical video has got to get to the head of the line.

So will video really get integrated into business apps as part of the CEBP push? I think it's likely, at least for some areas. Stephen Epstein said Avistar will soon announce an agreement to integrate into a major CRM system, and video call centers make an awful lot of sense in certain scenarios--like customer service, where the customer can use their cell phone to stream video of the appliance or whatever that's got a problem, and the contact center agent can see that video and try and diagnose the problem.

Incidentally, if you look at that diagram above, you can see that the video endpoint is at the top layer. I asked Stephen Epstein if Avistar was planning to emphasize that lower layer of management rather than the video desktop, seeing as how there are some pretty major competitors fighting over the desktop right now, and as Brent Kelly points out in this article, the whole video desktop market seems to be steadily and irrevocably commoditizing (and advancing real slowly--Brent notes that the third-most-common desktop video platform is NetMeeting, which Microsoft hasn't supported, let alone updated, for half a decade).

Epstein said, however, that Avistar sees a future for its video client--not as a standalone desktop, but as a plugin to heavier-weight clients like Microsoft Office Communicator (the OCS client).

Stephen Epstein didn't really pull a lot of punches: Avistar's endpoint is better video, more scalable and more interoperable than Communicator (in that it doesn't use a proprietary codec like Communicator), he said. Epstein insisted that customers have told him they like the overall OCS architecture and plan to use Communicator, "but we absolutely loathe their video."

For me, this helped clarify what could be the two different approaches moving forward, from Microsoft vs. IBM/Lotus: Microsoft as the all-in-one vendor vs. Sametime as the client reaching out to best-of-breed communications capabilities provided by best-of-breed vendors, be they the Avistars of the world for desktop video, or the Avayas of the world for desktop voice. Then the affiliated apps belong to a mix of the platform players and third parties.

Too simplistic? And where does Cisco fit?