Talkdesk today announced Context Mobile in New York, the second stop of its three-city roadshow that started in Chicago and will end in Austin. The company says Context Mobile will be the first of what will eventually be a suite of products delivered on its simultaneously announced Talkdesk Context platform.

To learn more about the genesis of the solution, how and why companies would use it, and Talkdesk's plans beyond Context Mobile, I had the opportunity to ask a series of questions of company COO Gadi Shamia.

Is Context Platform the result of internally-developed technology, or is it part of an OEM agreement with another technology firm?

Context Mobile is internally-developed technology. We truly believe it is something we needed to own. We see Context Platform as a modern version of telephone number lookup (i.e., CTI). Context is going to become a core capability, to the extent that a few years from now we're going to look and ask, "How was it possible that I used to call customer service and they knew nothing about me?"

Why are you using the term "context" and not "customer journey"?

"Customer journey" was used traditionally to describe the past. The expectation was that the customer calls in, you reverse-look up the number, find the history of the customer, and present it to the agent. The agent can see what happened in the past -- e.g., previous service calls, tickets, or transactions.

We want to distinguish this functionality and focus on the real-time aspect of it. In most cases, the past is so "busy" that it doesn't really inform the agent. Especially in business-to-consumer transactions (a core target market for Talkdesk), it's about right now. That is why we picked the word "context." 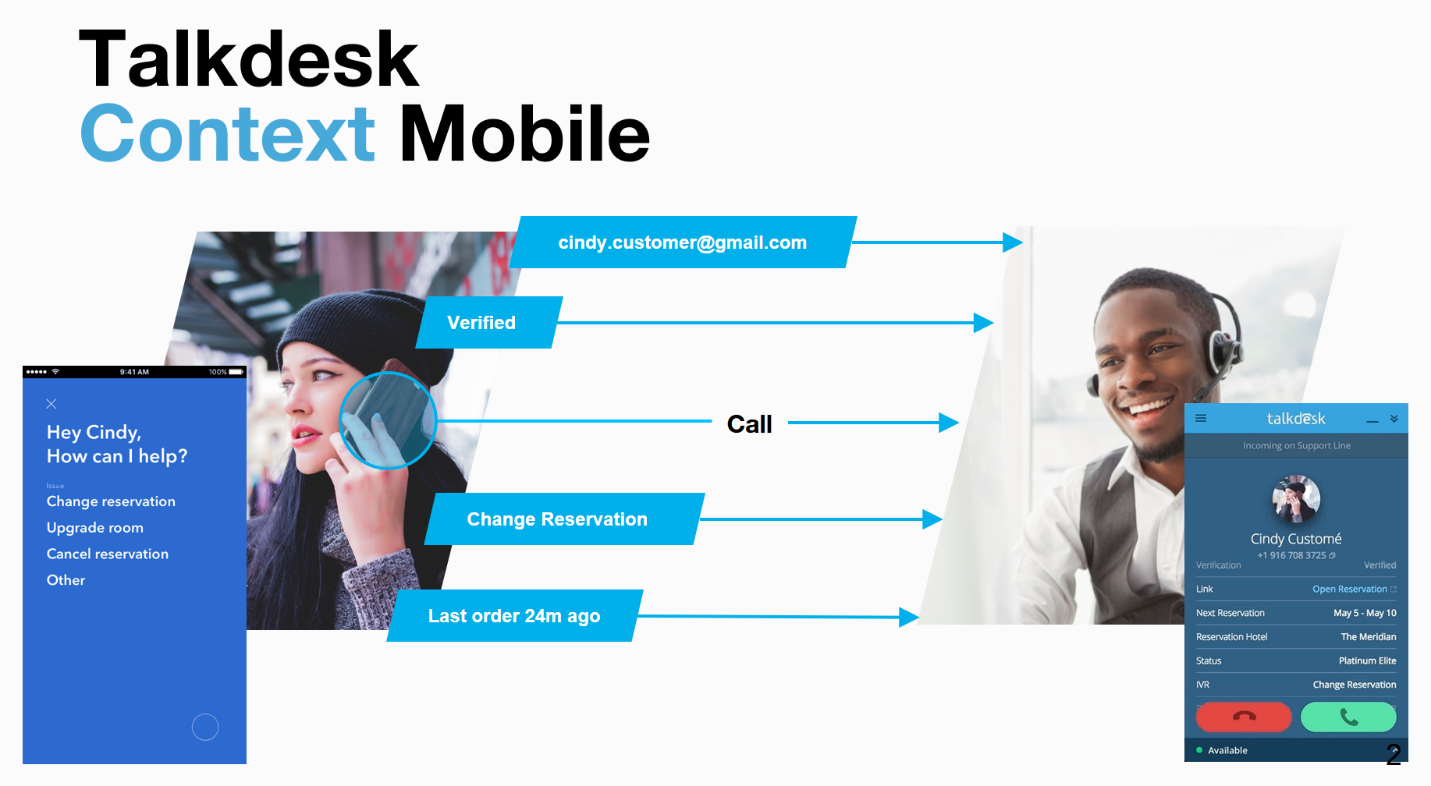 Context Mobile and a CRM system -- why would a company need both?

Talkdesk does not believe the two applications are in conflict. Context Mobile is an ability to put a piece of code in a company's mobile application. When customers call customer service, Context Mobile is able to provide information to the agent in real-time. It doesn't contradict the CRM, which typically contains the history and previous transactions.

The type of data Context Mobile is able to send could be a location, which can change every second. It could be the page you're on right now on the mobile app. It could be the three hotels you looked at before you made a reservation. That information may not be relevant to the CRM system, but it is entirely relevant to the customer service agent at the moment the customer decided to call. This is information CRM systems don't want to store or don't have a use case to store.

Talkdesk today does not support email or chat interactions. Why was Context Platform given development priority?

My honest answer is we don't want to support email. We believe that the email problem was solved. Zendesk does a phenomenal job handling email for customer service. Salesforce does it. Everybody is providing email customer service. There are probably 700 chat solutions, and we can integrate to all of them. Many of them are mediocre. Why do we have to add another mediocre solution to the mix?

We can integrate to email, we can integrate to chat, but we can make the voice experience awesome versus having it be just okay. We're investing in differentiating around where we're strong and what we believe should be the dominant customer service experience for years to come. We are focused on real-time, giving more real-time information to the agent when the customer calls.

What is the roadmap for the Context Platform?

We would like to be everywhere -- and everywhere means every digital context that you can imagine. The next logical step, then, is a Web toolkit that could be dropped on a webpage. It would allow a company to do the same thing (as Context Mobile) -- call customer support from any webpage and capture the same type of information.

Next, we plan to offer an open API so application developers can embed the capability. A scenario might be a customer interacting in a chat and in the middle of the chat, the agent has the ability to suggest that they talk to customer service on the phone. A button appears, the customer clicks it, and when they get a callback, the agent knows the context of the chat conversation. We also see possibilities with knowledge bases, so expect us to have a Zendesk plug-in. We are also thinking of Alexa uses cases, or any other connected devices.

Context Mobile has been in beta trials with four companies and is now generally available. In terms of pricing, Context Mobile will be included in Talkdesk's Enterprise license.