This longtime telephony vendor is positioning the utility public cloud as just another platform on which you can deploy its core product, the Aeonix UC platform.

If you've been around the enterprise voice game awhile, you probably recognize the name Tadiran Telecom. The Israeli company is a longtime player in this market, with a 50-year history of going up against the storied names in the PBX world, from the Nortel/Rolm/AT&T days to today. Now Tadiran is making a move that it believes will differentiate itself, by making its flagship Aeonix UC platform available for deployment on Amazon Web Services (AWS).

Tadiran's not the first company in this space to go the AWS route. Most notably, Interactive Intelligence this spring announced its PureCloud service, which runs on AWS. But Tadiran is taking things a step farther; rather than building a discrete product offering around AWS, Tadiran is suggesting that either channel partners/dealers or enterprises can simply avail themselves of AWS as part of any Aeonix deployment -- be that as a pure-AWS-based implementation, a hybrid running both on prem and in AWS, or as a hosted service in which Tadiran partners deploy Aeonix on AWS and sell the resulting service to the enterprise.

Furthermore, unlike Interactive, which is keeping tighter control over the PureCloud deployment and has no stated plans to use any public cloud other than AWS, Tadiran says it will eventually make Aeonix deployable on other public clouds, such as Microsoft Azure or Google Cloud -- a model it calls "bring your own cloud."

In short, Tadiran is positioning the utility public cloud as just another platform on which you can deploy its core product. Aeonix will continue on as premises software, but Tadiran is pushing the idea that AWS deployment will help enterprises capture the economies of scale, flexibility, and resiliency that the massive size of the AWS and other public clouds promise.

I recently had a chance to speak with Gal Ben-Yair, Tadiran's CTO, and it so happened that our conversation took place just a couple of days after AWS suffered a much-publicized outage that temporarily took down Netflix and other major AWS-based sites. Gal told me that, while the outage showed AWS isn't immune to such incidents, it's also possible to minimize the risk in an AWS-based deployment (as indeed the linked article shows about Netflix). Gal insisted that the challenge is as much about perceptions as about reality. "The trick here is to get people to understand that the chances of having these sorts of failures on Amazon are at the very least smaller than [they would be] on the customer site," he said.

The benefits of an AWS-based Aeonix deployment are basically tied to the benefits that represent AWS's core value proposition, according to a Tadiran whitepaper on the topic. These include:

Tadiran argues in the whitepaper that AWS is a better way to do cloud communications than going with a hosted UC as a service (UCaaS) offering, claiming that it's more economical to buy the software and rent just the hardware, as opposed to renting both from a UCaaS provider. It also cites IDC figures claiming that hosting an application on AWS offers 63.9% TCO reduction and 81.7% less downtime versus on prem.

The company says it can support up to 25,000 users on an Aeonix system within AWS. Tadiran proposes three AWS deployment scenarios: 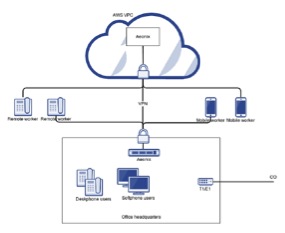 So far, it's still early times for the AWS strategy. Gal told me that two Tadiran dealers are up and running with the software in the AWS cloud, getting ready to launch services based on it. He said a couple of Tadiran customers have expressed interest and the company is working with them now to get pilots going.

Our No Jitter Research has shown continued enterprise ambivalence about using the cloud for communications; specifically, the model of deploying your own communications software on a public cloud is less common today than having a hosting provider own, operate, and maintain the software. As our audience survey showed, the big concerns continue to center around security and loss of enterprise control. AWS and its proponents have their arguments against this perception, but if nothing else, it's likely to take some time for these arguments to break through the natural (and understandable) caution of enterprise managers. Still, it's hard to believe Tadiran will remain the only call control vendor with an AWS story. Choices are expanding, and the logic of the cloud is unlikely to go away anytime soon.