In a recent interview, Starbucks' top IT exec shared why he decided to join this enterprise mobility vendor's board of directors. 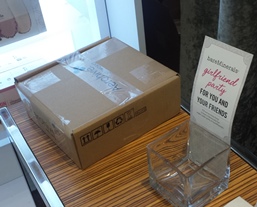 While inside my favorite makeup store the other day, I glanced over on the counter and saw a box with Aerohive written on it, and recognized it as a likely new access point for the store. Having spoken with Aerohive earlier in the week, I couldn't help but to act on the coincidence by quickly pulling out my smartphone and snapping the photo you see here (because that is the mobile world in which we live -- one in which Aerohive plays a significant role, I might add).

Aerohive has long been an interesting company to me in the area of enterprise mobility, and so its recent announcement that Curt Garner, EVP and CIO for Starbucks, has joined its board of directors, caught my attention. I had the opportunity to talk with Garner about his decision to join the Aerohive board, and walked away knowing I'm not the only one who finds the company worth watching.

Garner joined Starbucks in January 1998 as the director of international IT. While the company today is in 68 countries and has roughly 7,000 locations outside the U.S., at that time its reach was far more modest. "It was an interesting job at the time because Starbucks was two to three years past its IPO and we were in 20 U.S. states. ... So I thought it was interesting taking a job to lead international for a company that wasn't even in all the states yet."

Garner worked together with a small group of executives to launch Starbucks' international business unit, eventually becoming VP of international IT in 2006. In 2008, he took on a U.S-focused role, with responsibility for consumer- and employee-facing technology.

He became an SVP in 2010, taking over the accountability for Starbucks' business intelligence, architecture strategy practices, and development of mobile apps products and loyalty systems. In 2012 he became CIO.

Under his watch, Starbucks became a mobile innovator, giving customers the ability to pay for coffee with a smartphone app. Today, Garner said, 20% of the company's transactions are paid through a mobile device -- and Starbucks has developed a new platform to make mobile ordering even easier. Now customers can order coffee through their phones for preparation in advance at a local store. Payment is settled through a cloud service, so they don't even need to take their phones out of their pockets when they walk into a store to pick up their coffees.

"This kind of use case of mobile applications being used to change the customer interface and change the customer interaction and change the way the business serves its users -- that's what I think of when I think of the broader macrotrends," said David Greene, SVP and CMO at Aerohive. "And that's one of the reasons it was important to have someone like Curt on the Aerohive board. He brings that perspective of how mobility is really changing every facet of how businesses operate."

In his role at Starbucks, Garner said he's been watching Aerohive for a couple of years. He was introduced to the company by venture capital firm Kleiner-Perkins Caufield Byers, which has periodically invested in Aerohive and with whom Garner meets occasionally to get the firm's view of emerging companies that serve the enterprise market.

"Aerohive was one of the companies that they told us we should watch out for," Garner said, "and some of the interesting things they are involved in."

When Aerohive approached him in November 2014 with the opportunity to join the board, he had by that time gained a degree of familiarity with the product set and the problems that Aerohive is positioned to solve, Garner said. So he reached out to some close friends in the tech community with ties to the Silicon Valley, and "heard unanimous positive feedback regarding the quality of people at Aerohive." In addition, he heard from multiple constituents that the company had some "really great groundbreaking tech and product set," Garner added.

"The entire ecosystem around mobility is changing the way we live, it's changing the way we learn, it's changing everything about our lives," Garner told me. "And I looked at those things together and said 'great product, great people, in an industry that's still young and has a chance to make an impact in the future' -- and it seemed like a great opportunity and I was privileged to be able to take it on."

"It changes the way that resiliency occurs, it changes the way the management substrate occurs. It makes it a lot easier for organizations that don't have huge tech teams behind them to rapidly deploy a whole suite of interconnected mobile capabilities -- and do it in a way ... that allows ... direct insight and data into what customers are doing and what customers need, with the idea that we can be more proactive in responding to people's needs instead of reactive," he said.

"But it goes well beyond what's happening in retail," he continued. "I think some of the things the company has done with those products and the integrated set of services around them for education and for healthcare, is incredible."