The emergence of new technology enabling social physics brings up challenge regarding good and bad uses of data collection and processing.

What if we could place sensors on people to collect information about their movements and communications patterns in both work and community settings and draw conclusions that could help them and their community function better? This is Social Physics. Social physics is the way human social networks spread ideas that alter behaviors.

Social Physics is the theme of The New York Times article, "M.I.T.'s Alex Pentland: Measuring Idea Flows to Accelerate Innovation." The idea of collecting vast amounts of data about individuals and their interactions is not new. We already see the potential of personal sensors being used for things like fitness and health vital-sign tracking. What is new is the technology that enables the more "social" measurement to occur.

The devices measuring this information are called sociometric badges, which are about the size of a credit card, only a little thicker. The cards can detect the person's location, movements, and the pitch and volume of speech, but not the words spoken. There is no sound recording (for those worried about Big Brother listening in.)

Is This Really Physics?
The term Social Physics may be something of a misnomer, however, as it suggests a scientific precision that the actual technology and systems may not be able to ensure.

This is the weakness of big data in general. Can big data processing produce useful results that can be empirically tested? I think that there will be many conclusions drawn by analyzing big data that will ultimately not prove valid.

And what would happen if we could accurately determine the cause of people's behavior--would we just learn from it, or then try to change it? Furthermore, will people behave differently when they know their actions are being recorded and analyzed? (When I see reality TV shows, I am sure that much of what I see is in reaction to being on camera and does not really show the reality. Did you know that there are reality show writers?)

Good and Bad Use
The data collected around Social Physics will be about people. That means there are privacy issues, data ownership, and finally the use of the data.

In Europe, data ownership is with the person, not the collector. People can give permission for data use or restrict its use. In the U.S., data ownership is with the collector, but privacy advocates may be able to legislate some changes to this position. Read some of the agreements you have to sign off on with social media sites to get an idea of what information control you give up to use that site. Consider what communications companies collect, and their delivery of big data to the government.

An interesting conundrum is the person working in the U.S. who is a foreign citizen, or conversely an American working internationally. The collection and ownership rules range from favoring the individual to favoring the government.

A big question is how an enterprise will have to deal with multiple information jurisdictions. A good resource for understanding these issues can be found in "Rethinking Personal Data: Strengthening Trust" by the World Economic Forum. Another good resource is the Washington Post article, "The rise of big data brings tremendous possibilities and frightening perils." 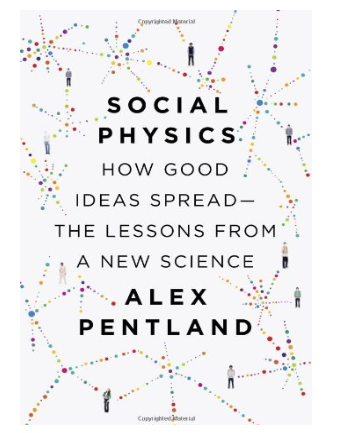 The New Book
MIT's Alex Pentland makes a very important point. On Facebook, we place the data we want to be seen, and leave out other data. With the collection of data via the sociometric badges mentioned earlier, data is collected without reservation. This second form of data may prove to provide a whole new range of insights that common social media sites do not collect, store, or analyze. Pentland's book "Social Physics: How Good Ideas Spread--The Lessons from a New Science" provides a full coverage of his viewpoints.

A Video to Watch
"Reinventing Society in the Wake of Big Data" is a 24-minute video of Alex Pentland speaking for Edge.org. A quote from that video is worth noting:

"With Big Data we can now begin to actually look at the details of social interaction and how those play out, and are no longer limited to averages like market indices or election results. This is an astounding change. The ability to see the details of the market, of political revolutions, and to be able to predict and control them is definitely a case of Promethean fire--it could be used for good or for ill, and so Big data brings us to interesting times. We're going to end up reinventing what it means to have a human society."