Skype for Business Finds Its Voice, at Least for Some

A No Jitter reader survey on Lync/Skype for Business gives rise to some interesting questions on voice strategy.

No Jitter has launched a series of surveys of our enterprise end user base, and naturally the first topic we addressed is the one that continues to be foremost in the minds of many enterprise communications shops: Microsoft Lync, now Skype for Business.

You can see some of the highlights in the slideshow that my colleague Beth Schultz put together, and of course the chart that jumps out at you is the one showing that almost 90% of those who have adopted Lync Enterprise Voice consider it "better" or "much better" overall than the legacy systems they've been using. 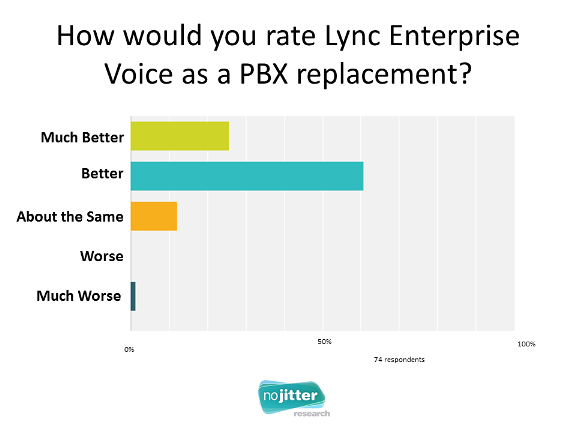 We asked two detailed follow-up questions that reveal a little more about how people feel. When we asked respondents who'd adopted Lync Enterprise Voice to rate its voice quality, 63% considered it better or much better -- a falloff from the overall rating, but still a healthy majority. When we asked about feature/functionality, 80% called Lync better or much better.

So clearly, enterprises that have deployed Lync believe it (and Skype for Business) can be a PBX replacement going forward. Oddly, it got more positive rankings overall than it did in the two specific metrics that we assumed would be most important: voice quality and feature/function. What does that tell us?

Our results also show us that respondents who have started deploying Enterprise Voice intend to continue ramping up those deployments, though at a fairly orderly pace. A total of 28% of those who have begun deploying Enterprise Voice reported having displaced legacy systems with Lync for more than three-quarters of their end users today; within two years, 51% say they'll have exceeded the three-quarters-deployed threshold.

Keep in mind that a minority of the market has deployed Lync for voice in the first place, according to our survey -- just 27% of those who have rolled out Lync at all say they're using it for voice. And when we asked the entire base of Lync adopters when they were expecting to roll out Lync/Skype for Business Enterprise Voice, almost half -- 46% -- said it would be three years or more, while another 20% chose "Never" as their time frame. So just about two-thirds of the market is not particularly focused on Lync/Skype for Business Enterprise Voice at this stage.

Still, I have to admit I was surprised by the strong positive responses we got from Lync voice adopters. The response suggests that the legacy voice players may find less traction in attacking Skype for Business on traditional voice metrics and values. Voice platforms still have value to enterprises, but what enterprises value in such platforms is changing.