How do you know if a login is from an actual user or a software program imitating the user?

Most users don’t practice good Internet hygiene, instead taking the easy route such as reusing the same login credentials across many accounts. This makes the login page a target for credential stuffing, regardless of whether your organization has experienced a data breach.

Through this fraud technique an attacker can purchase goods or services, take out bank loans, or steal medical information, for example. Credential stuffing can hurt your business, customers, and reputation -- with risk being commensurate with transaction value. 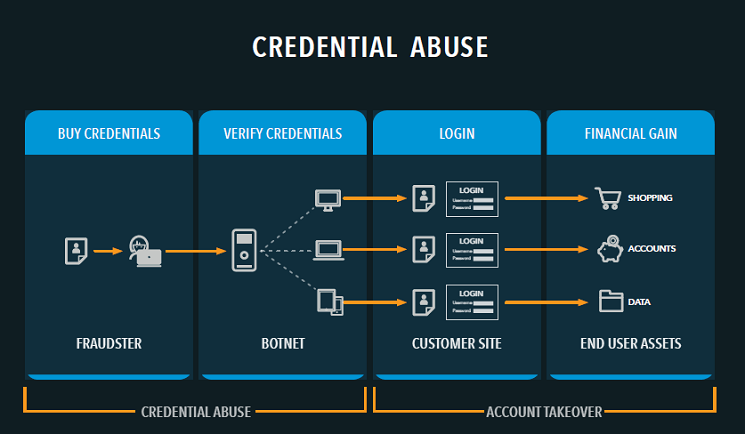 Credential stuffing may appear to impact individuals alone. But that’s not the case.

Company policies usually forbid employees to use their work email or credentials to sign up for services online. They do it anyway -- and credentials found within stolen databases are often directly associated with individuals who use the identical or similar versions of login credentials for work and personal accounts. If work email or credentials get hacked, then a company’s proprietary information, customer lists, and even financial documents are at a high risk of exposure. Attackers can exploit private communications, lists, and networks by leveraging stolen employee login credentials to access a business’s information.

If there is unusual traffic flow through the site and/or APIs, this may indicate the use of automation used to implement the attack.

Another technique to consider employing is regularly checking users’ passwords to ensure they’re not in breach of policy and disallow them if they are.

The National Institute of Standards and Technology released an updated Special Publication 800-63B on Digital Identity Guidelines. The guidance counters the long-held belief that passwords must be long and complex. The new guidelines recommend that passwords should be “easy to remember” but “hard to guess.” The new guidance suggests usability and security go hand in hand.

To head off credential stuffing before it hits your organization, consider deploying technologies such as the following:

As security organizations become more sophisticated, so do the attackers -- and in most cases, more so than businesses. Safeguarding your company starts with understanding credential stuffing threats and knowing the best approaches for stopping them.