The Rise of the Public Collaboration Network: Part 2

With Facebook's announcement of Skype-powered video chat, the race intensifies.

With Facebook's announcement of Skype-powered video chat, the race intensifies.

As was reported in the Wall Street Journal, today Facebook launched video chat powered by Skype.

As I wrote in my original article, The Rise of the Public Collaboration Network, this type of functionality where millions of people can communicate and collaborate without using the PSTN is giving rise to a new and improved network--the PCN.

With this announcement, I have updated the table below which is my attempt to track the leaders in this race: 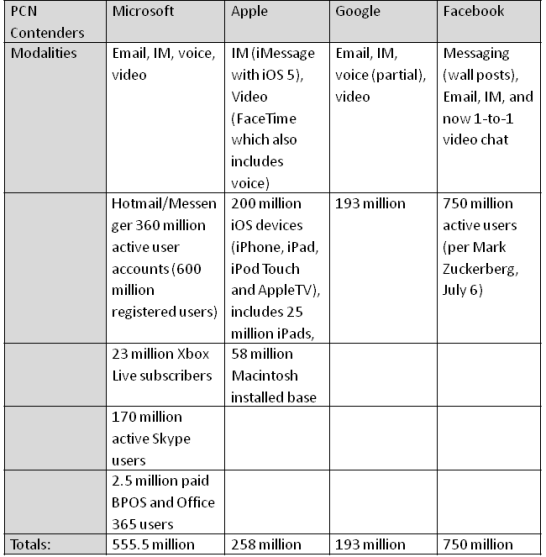 Only yesterday I wrote, "Facebook has lots of numbers and it is available on virtually every device and platform; however, it currently offers the fewest communication modalities." Well, one day later, add video (which of course includes voice) to the list. And add 250 million users to the count! (To be fair, the statistics page I used to derive my table did show 500 million active users just days ago. Today it shows 750 million.)

It should be noted that currently the Facebook video chat service is one-to-one but Facebook is already hinting it may be expanded to support group video chat in the future. Also note that video chat is not currently available on mobile devices.

So how will this announcement impact the Microsoft column? That is unclear. With Microsoft's acquisition of Skype and the Microsoft partial ownership in Facebook, do Facebook users chatting using Skype technology drive more "PCN points" for Microsoft? Could we soon see federation between Skype, Facebook, Messenger, Office 365 and Xbox users?

It is hard to say, but in no way is today's Facebook announcement good news for Google.

With all the changes a day can make, what I wrote only yesterday rings even more true...

No matter who is ahead or behind at present, the rise of the PCN is likely to be a marathon as opposed to a sprint. The starter's pistol has fired and the race is on.