The Rise of the Public Collaboration Network

A race is on to form a new network that could replace the PSTN.

The public switched telephone network (PSTN) allows any telephone in the world to connect to any other telephone. This is accomplished through a series of interconnected networks and a single numbering plan.

The PSTN has and continues to serve us well. However, mobile phone use has exploded and texting, which still leverages the PSTN numbering plan, has supplanted voice as the most commonly used communication method. In fact, I previously argued that texting, not video is the new voice.

With Microsoft's announced acquisition of Skype, I wrote about The Day the PSTN Died. With the announcement that Office 365 will integrate with Skype I would now like to discuss the rise of what I refer to as the Public Collaboration Network or the PCN for short.

Similar to the PSTN, the PCN will allow a user to connect to any other user using a common identification plan (more likely to be an email address or SIP URI as opposed to a sequence of digits).

Unlike the PSTN, the PCN will provide a common connection mechanism regardless of whether the communication is real-time (voice, video, IM, texting, document or desktop sharing) or asynchronous (email, discussion boards, voice mail, calendaring, streaming audio and video). The PCN will also share rich presence and location information to assist in determining the best communication modality to use ahead of the connection attempt.

Most importantly, the PCN will be based on connecting users, not simply connecting devices (which is how the PSTN works--although arguably dialing a mobile phone is more likely to be a connection to the specific user, which I believe is one of the key factors driving mobile device adoption.)

Finding exact number of users and then determining "active" users and "users" versus "accounts" can be challenging. Hopefully within a few tens of millions here is my quick tally on the race: 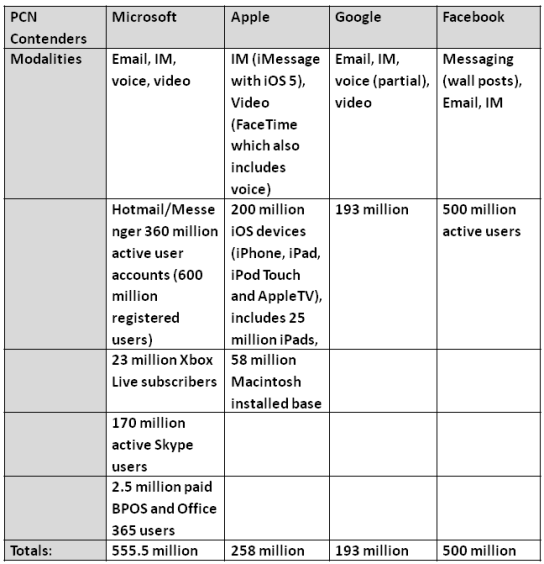 As usual, the numbers don't tell the entire tale.

Beyond numbers, the PCN needs to be ubiquitous to enjoy the success and relevancy of the PSTN.

Facebook has lots of numbers and it is available on virtually every device and platform; however, it currently offers the fewest communication modalities.

Google works on almost all devices but lacks the numbers. Also Google voice uses the PSTN as opposed to creating a separate voice path and Google voice currently only works in the contiguous U.S.

Apple communications only works on Apple devices, although its numbers are growing.

Microsoft with its acquisition of Skype has both the numbers and the device support (Messenger already works on Mac and Windows and the IM portion works on most smartphones; Skype works on virtually every platform.)

Boiling it all down, I would suggest that Microsoft has the numbers and the pieces to take the lead in the development of the PCN. Of course Microsoft still has much work to be done actually integrating the pieces they control.

And too, the existing telcos are part of this race. In fact, telcos could arguably take the lead if they were willing to cannibalize existing services such as SMS and cellular voice by offering data-based messaging and VOIP services. The trouble is telcos derive a disproportionate share of profit from legacy services such as SMS. Thus the greater adoption of smartphones and the access to data-based messaging services has been detrimental to telco profitability. Many analysts are already tracking and/or projecting a decline in SMS usage and associated revenue in the highly developed North American and European markets.

As such, for the telcos to move to the front of the pack will take the courage to accelerate change with a push towards interoperability and a shift towards reasonable data and roaming data rates. Alternatively the telcos can work to protect their current “cash cows” and risk being further disintermediated and commoditized.

No matter who is ahead or behind at present, the rise of the PCN is likely to be a marathon as opposed to a sprint. The starter's pistol has fired and the race is on.