One frustration I used to have with my Bluetooth headset was forgetting when it was connected and answering the smartphone like a handset. Hello. Hello?

That problem is a memory because a few years ago I switched to a Plantronics Voyager Legend UC that detects when I'm wearing it. When I remove the headset, calls go through the handset. I don it, and the headset becomes active.

Sensors are all around us, and it's time to put them to work. Why, for instance, doesn't the smartphone provide this same functionality itself using the face detection sensors that come into play in turning off the display when the phone is in use as a handset? It's actually kind of odd that the smartphone doesn't do this. 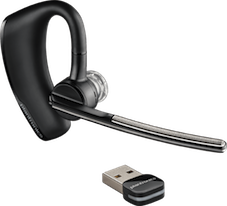 That auto-sensing of headset use was a reasonably obvious problem to solve, but there's quite a bit more that can be done. Plantronics has been loading its headsets with sensors and providing direct access to them with APIs. UC vendors, and Plantronics itself, have been publishing some creative integrations.

Of the APIs Plantronics makes available, wear state and proximity are the most popular. The wear state API enables what I described above, where the headset knows if it's on a head or set on the table. Contact center solutions can automatically take agents out of service when they remove their headsets.

Proximity detection determines if a user is near his or her phone or computer. Last month Avaya announced an expanded partnership with Plantronics that includes a proximity-based integration with Voyager Legend headsets. I've seen other integrations that use Plantronics' proximity APIs, too, and had assumed they were all the same -- but it turns out proximity integrations are more like snowflakes.

In all three cases, Plantronics uses the strength of a Bluetooth signal to determine proximity. Bluetooth is fairly reliable and consistent across smartphones, but that's not the case on desktops. Plantronics offers a Bluetooth USB dongle for desktops.

Wear state and proximity are just the beginning. As we move toward a more connected workplace, we will find reasons to enable integrations that react to a wide variety of triggers. These could include conversation over talk and volume level, headset and background noise level, and workflow events such as calendar meetings, emails, or queue length. Avaya released its proximity integration as a Snap-in within its Engagement Environment, so it is available for modification.

APIs are part of our new customized and integrated world. Give a user an integration and they are happy for the moment. Give the user a catalog of APIs and they can take-up fishing.

Don't look now, really, because Plantronics even offers an API for head position.

Dave Michels is a contributing editor and analyst at TalkingPointz. Join him at Enterprise Connect 2016, coming March 7 to 10 in Orlando, Fla., where he'll be highlighting cutting-edge enterprise mobility solutions in the Innovation Showcase. Register now using the code NJPOST and receive $200 of the current conference price.