A look at new products for the contact center, small businesses, and mobile workers

Beth Schultz
In this week’s collection, we share contact center-related news from conversational AI startup Replicant and intelligent virtual agent platform provider Inference Solutions; a quick-start communications offering from 8x8; and mobile connectivity options from Cradlepoint and Netgear.
Voice AI Startup Replicant Launches
The conversational AI market has a new entrant, Replicant, a newly funded startup now led by cloud contact center veteran Gadi Shamia, who most recently had served as COO at Talkdesk.
Replicant this week announced that it has received $7 million in seed funding to put toward launching its “Thinking Machine” voice AI platform. Atomic, Bloomberg Beta, Costanoa Ventures, and Norwest Venture Partners participated in this initial funding, the company said.
With Thinking Machine, Replicant aims to give companies the ability to support full phone conversations between customers and bots. What this means is that its engine will process full sentences, rather than just keywords, in real-time, Shamia told me in a No Jitter briefing. This will allow companies to apply the voice AI platform to various call flows, pulling agents in only as needed for escalation.
Having been introduced to Thinking Machine early on, Shamia said he committed to becoming Replicant CEO once developers had evolved Thinking Machine to the point of being truly conversational. He gave a nod to Benjamin Gleitzman, founder and CTO, and his “very smart” developer team.
A differentiator for Replicant is that its team built Thinking Machines for phone conversations from the get-go -- “it was never ‘build for chat and let’s see how it works for voice,’” Shamia said. Latency and accuracy were prime focus areas for developers, he added. The aim was to allow the engine to make a determination on how to respond to a customer comment within 20 milliseconds, “because we need to send the audio file down that phone line and we want to make sure we never have more than one-second latency,” he explained. 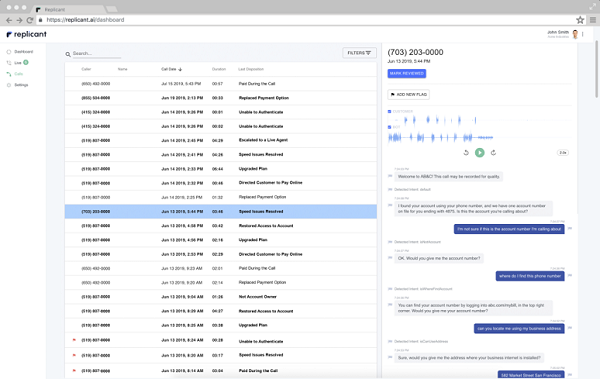 While Replicant hasn’t formally introduced its conversational AI platform yet, Thinking Machines is in use within customer environments, said Shamia, noting that the company is targeting midmarket to larger-sized contact centers and its base currently ranges in size from 300 to 2,800 agents. One early user, for example, is using Thinking Machine to serve a call flow it previously had allotted 100 agents to handle -- agents who are now able to take on more complex, higher-value work.
Inference Solutions Adds WhatsApp to Solution Set
Inference Solutions earlier this month announced that the latest iteration of its Studio intelligent virtual agent platform, release 6.2, includes a WhatsApp integration.
With this integration, Studio platform users can now support customer care through this popular messaging app. Businesses can create WhatsApp messaging tasks and instruct virtual agents to respond to customers via the WhatsApp messaging interface, Inference said.
In addition, Studio 6.2 features natural language processing (NLP) enhancements with deeper support for Google’s Dialogflow conversational AI engine. For example, Studio’s Open Form node now includes phrase hints, which Inference said improve the accuracy of speech recognition with availability of a list of phrases sent along with each request. Also new in this release is the ability to automate appointment scheduling with Google calendar and location display on Google maps via natural language tasks that use pre-built Dialogflow agents, Inference said. (For more on Dialogflow, see this week’s news post and our ongoing Decoding Dialogflow series.)
In this release, Inference also has fine-tuned the underlying speech platform with an eye on improving its use in noisy environments, and has added new voices to bring its total support to 59 across a dozen languages. These voices comprise a combination of Google WaveNet and Standard voices, available as part of the NLP session class within their respective regional and global Google voice packages, the company said.
8x8 Offers Cloud on the Quick
With emerging businesses as its target, 8x8 this week introduced a start-up enterprise-grade communications system available through online ordering, on the fly.
The offering, called 8x8 Express, provides unlimited calling in the U.S. and Canada and includes the company’s Meetings solution. This means users have access, via desktop or mobile app, to high-definition audio and video conferencing and screen sharing, as well as support for voicemail, one-to-one or group messaging, and intelligent call routing, 8x8 said.
In addition, Express provides integration with Google and Microsoft calendars, and is compatible with several Poly desk and conference phones, 8x8 said. 8x8 also offers a management tool so businesses can self-administer the service.
The Express offering is available now in the U.S. as a 30-day free trial, 8x8 said. Thereafter, the service costs $12 per user per month, with no minute caps or long-term contracts.
Through the Express offering, 8x8 aims to help entrepreneurs, startups, and small businesses focused on growth to “present a unified professional brand identity,” said Dejan Deklich, chief product officer at 8x8, in a prepared statement.
Cradlepoint Edge Devices Get Nod from Verizon
Enterprises and public safety organizations looking to take advantage of Verizon’s 4G LTE Advanced cellular network, available in more than 450 U.S. cities, can now use certified edge routers from Cradlepoint. As announced this week, the company has gained Verizon network certification for its Gigabit-Class LTE edge routers.
Customers that have Cradlepoint NetCloud Service subscription plans with Gigabit-Class LTE edge routers will now be able to access Verizon’s high-speed LTE Advanced network while building a “pathway to 5G,” the company said. The edge routers use Cradlepoint’s Elastic Wideband technology, a component of its Elastic Edge architecture for providing connectivity over LTE and 5G networks.
The NetCloud Service subscription plans are available in one-, three- and five-year terms. They include 24/7 support, limited hardware warranty, a choice of Gigabit-Class endpoints, and access to Cradlepoint’s cloud-based orchestration and management system, which the company said enables zero-touch installs and simplified management via a variety of software-driven functions. These include automatic detection/selection between multiple carriers, continuous testing of link status, and ability to set data monitoring and usage-based policies.
Netgear Mobilizes on 4G
In other wireless news, Netgear last week launched a 4G mobile router with download speeds of up to 2 Gbps and introduced an unlocked version of its AirCard 797 mobile hotspot, which offers a download speed of 400 Mbps.
With the new Nighthawk M2 4G mobile router, also available as a mobile hotspot, and the AirCard 797, traveling business users are able to maintain secure connections to the office rather than using shared public networks, Netgear said. The router features a Gigabit LAN port and supports up to 20 WiFi-capable devices on a single connection, while the AirCard 797 is able to connect up to 15 devices simultaneously.
The availability of these 4G LTE devices signals Netgear’s continued support of Wi-Fi providers in the move toward 5G, said David Henry, a senior vice president with the company. “While ubiquitous 5G coverage is still a few years away, LTE will continue to be the best for high-speed mobile Internet connectivity,” he said.
The devices will be available in the third quarter.