Expect a wave of laws striking down the restrictions on who can repair equipment. 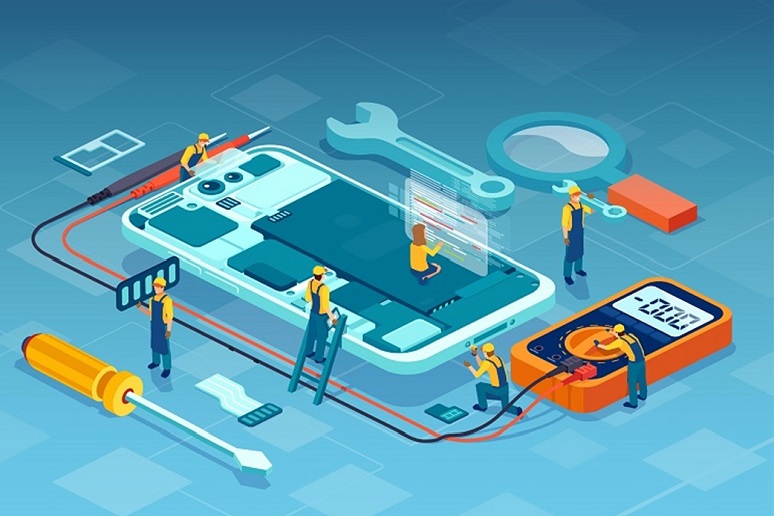 Image: Feodora Chiosea - Alamy Stock Vector
New York is the first state in the nation to adopt a right to repair law, which will become effective in June 2023 and change the terms and conditions by which people and enterprises that own telecom equipment can repair it. The New York Digital Fair Repair Act (Assembly Bill A7006B) is expected to be signed by Governor Kathy Hochul shortly, and will become effective one year after she signs the bill. Other state legislatures are taking notice and are expected to act soon to achieve what many would consider the creation of real competition in the equipment service sector.
While New York may be first, it likely won't be the last. Such actions are expected to sweep across the country to alleviate, if not eliminate, restrictive agreements that have limited or prevented other than original equipment manufacturers (OEM) from providing service and repair to existing equipment.
In the most basic terms, here is what the bill provides:
First, OEMs "make diagnostic and repair information for digital electronic parts and equipment available to independent repair providers and consumers if such parts and repair information are also available to OEM authorized repair providers." This means that entities that manufacture and sell equipment will no longer be able to dictate the locations where devices can be brought for repair or who can service them.
Second, parts, components, and information, including diagnostic and repair instructions, that have previously been available only to OEM-“authorized” providers will, for the most part, be available to non-OEM-identified service providers. This largely eliminates the problem of non-OEM-identified providers being denied access to both parts and repair expertise that’s product specific.
There are some notable exemptions from the bill’s requirements. For starters, the access provided by the bill does not apply to medical devices, home appliances, agricultural and off-road equipment, motor vehicles, or public safety communications equipment.
Some less obvious points must be considered as well.
The law is very specific that information qualifying as trade secrets need not be disclosed. When I asked what would keep an OEM from claiming that everything is a trade secret and thus exempt from disclosure, Gay Gordon-Byrne, who has driven this movement in New York from her role as executive director of Repair.org, said that the Uniform Trade Secret Law (UTSA) “defines what kinds of information can be protected as a trade secret. Secrets have to be kept secret and not distributed. So repair manuals, once distributed, lose any protection as potential secrets. Secrets must also have independent economic value—like the recipe for Coca-Cola. The recipe is a classic example of a secret. However, repairing a soda dispenser does not require any access to the recipe—just the busted part. Right to Repair is all about fixing the dispenser.“
She continued: “Schematic diagrams have often been claimed as secrets as a crude attempt to block repair, but since the diagrams are published, they cannot also be claimed as secrets. If any OEM has a real secret to protect – [it] should NEVER NEVER NEVER share the information on the internet. Even under a non-disclosure agreement. Most secrets are things like recipes, formulas, marketing plans, advertising plans and things which a competitor might want to steal.” Lastly, she said, the “same goes for cyber security—if a manufacturer puts a cyber backdoor or secret in any published documentation—that giant gaping security hole is never going to keep the information secret.”
Another major concern is the distinction between what constitutes repair versus modification. For the purpose of the New York law, access to OEM information applies to repairs and not modifications. "Repair" is defined as restoration, while "modification" implies change or enhancement. Information and devices necessary for repair are covered by the law, while information and devices/parts for modifications are not subject to disclosure to competitors.
Additionally, if a part is no longer in production or available to the OEM for whatever reason, all bets are off. OEMs, in this case, are not required to provide the required equipment or information. Also, for items that require security-related locks, special tools or authorizations, the OEM must, "on fair and reasonable terms, supply the tools and/or documentation needed to access or reset such devices "through appropriate secure release systems."
Lastly, and most importantly, assuming that the parts or devices that the non-OEM requests remain in production, then the price to purchase such items must be under cost and terms “under which an original equipment manufacturer offers the part to an authorized provider,” including discounts, timely delivery, rights of use, and any other capabilities that it would have provided such components to an authorized OEM.
New York State Assemblyman Patrick Burke (D., Buffalo) shared his thoughts: "Many of the most powerful companies in the tech industry invested significant resources into stopping this bill. Their efforts ultimately failed, and the vote in favor of Right to Repair was overwhelming. I think that reflects both the power of the tech industry but also the merits and popularity of this bill. Its passage is a win for consumers in New York State; I was proud to be an early sponsor."
The Digital Fair Repair Act takes a giant first step in leveling the playing field for independent entities that offer repair services—a service category that has traditionally been a monopoly for OEMs. This monopoly has generated millions of dollars for OEMs at the expense of their smaller brethren who have the underlying skills, if not the experience, to read instructions and install modifications at a fraction of the costs the OEMs have been able to get away with in the absence of competition. New York may be first, but Massachusetts and California are on the bandwagon, and others are soon to follow when corporate consumers (and taxpayers) see both the benefits and savings that competition will bring.