prairieFyre Prepared for the Coming Wave

A new player enters the fray while the market tries to sort out Microsoft's plans when it comes to the contact center.

The wave referred to in the title is Microsoft Office Communications Server Wave 14, in 2010 given the temporary moniker of simply Communications Server 14, or CS 14. It seems to me that the wave has been a long time coming (the last update, OCS 2007 R2, was released 18 months ago) and I'm still not quite sure when it will get here. CS 14 "news" has been announced so many times in the past few months (VoiceCon Orlando in March 2010, Microsoft Tech Ed in June and World Partner Conference in July), that I had to double check to make sure I hadn’t missed the actual release. Turns out it is still "coming soon;" official Microsoft source material shows 2H2010 and the latest from partners is that they are being told November 2010 for the big launch.

Brent Kelly of Wainhouse Research does a great job of keeping No Jitter readers up to speed on the latest CS 14 news and there is no doubt that Microsoft is coming after the traditional PBX space. Microsoft messaging has gone from OCS 2007's "VoIP as you are" to "Your PBX is no longer needed," (quoted from a June 2010 Microsoft presentation). But what are Microsoft plans when it comes to the contact center?

For the time being, contact center applications continue to fall into the category of complementary solutions, those that can be built and deployed by partners in conjunction with CS 14. In March 2008, Microsoft announced a high-profile partnership with Aspect to deliver a contact center solution for then-OCS. Since then, additional OCS-compliant contact center solutions have been announced including Nortel’s Contact Center 7.0 (now a key component of Avaya Aura Contact Center 6.0), Interactive Intelligence and Clarity Connect (demonstrated during the Microsoft keynote at VoiceCon Orlando 2010).

Last week, prairieFyre became the latest company to enter the coming fray. While not a household name to those outside the contact center space, prairieFyre’s application is the OEM behind Mitel's Contact Center Business and Enterprise Edition. According to Todd Simons, VP of Business Development, 18 months ago prairieFyre formalized a project to fund an integration of its contact center application to Microsoft Communication Server. On the one hand, prairieFyre was looking for a way to diversify beyond support for a single PBX, and on the other they saw a contact center gap between Aspect at the high end and Response Group (OCS R2 integrated group routing capability) at the low end.

Targeted at the same sweet spot as the Mitel application (25 to 200 agents), prairieFyre Contact Center for Microsoft Communications Server can be deployed today with OCS 2007 R2. Using Silverlight, separate tabs for OCS and the agent application are used to manage softphone and agent functions (see graphic). The separate tabs will disappear when CS 14 arrives and a new SDK that is being built allows for a customized version of Communicator with a single client look and feel. 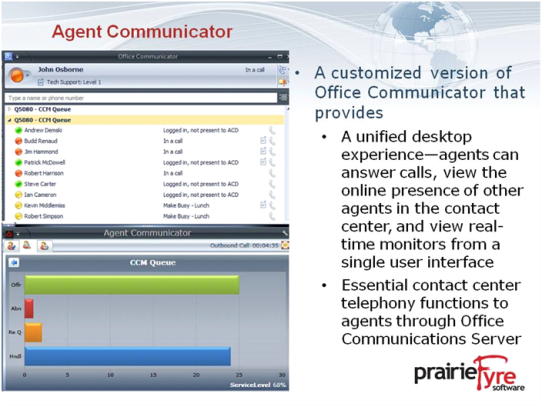 This is a big step for prairieFyre--till now Mitel managed the relationship with the resellers and customers. Now prairieFyre is engaged in recruiting Microsoft VARs directly to sell the application. As they--and we--continue to wait for the wave.