The expanded portfolio of voice and video solutions of Lync-optimized and -compatible products is a great proof point of the strong partnership.

In my year-end UC blog, I had called 2013 "The Year of Lync" since Microsoft had finally legitimized itself as a voice vendor. In a fall 2013 UC deployment strategies survey, I posed the question, "Which vendor do you consider to be your primary or secondary UC solution provider?" Microsoft came in as the second most common response for primary vendor and the top spot for secondary vendor. This was certainly no surprise based on the strength that Lync has shown in the customer and channel interviews I have done.

Many of the customers that had initially deployed Lync for chat and presence have also started to deploy Lync voice, creating a second wave of interest in the product. This next wave will also pull along some partners of Lync, including Polycom, which who has been a significant benefactor of the momentum behind Lync voice.

Earlier this month, Polycom reported its quarterly earnings, and the quarter was an interesting mix of old and new. The company's traditional group systems declined 8% year over year, as should be expected given the slowdown in video hardware sales. But the UC Personal Device group, which includes Lync-related products, shot up 33% year over year. Much of the growth in this group was from Lync-compatible handsets and other voice-related products.

Last week, Polycom outlined a product roadmap that sets up the company to capitalize on the opportunity created as organizations now go from Lync voice to Lync video. I think the strategy by Polycom is sound, as Lync tends to be more of a journey for customers. They start with Lync on the desktop, then use Lync for some peer-to-peer voice services, then migrate to Lync voice and then, if all goes as planned, Lync video. To date, Polycom has done a good job of targeting Lync desktop customers as the low-hanging fruit for Polycom-based Lync voice products. This would be the same base to now approach for Lync video with the new Polycom products.

Highlights of the newly-announced products are: 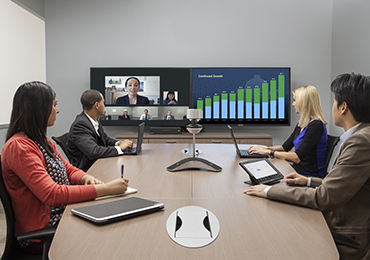 * CX8000 Lync Room System. I'm expecting Lync customers to take a strong look at Lync Room Systems (LRS) this year. The CX8000 is a videoconferencing system that includes presence, contact search, chat, virtual whiteboarding, and application sharing through a touch display. The product could be used standalone, but when used with Lync, offers integrated multi-party video and improved quality over open standards-based SVC (scalable video coding). This should allow customers to get more bang for the Lync buck already spent as they start to leverage the LRSs.

* CX5100 UC Station. The 5100 is the evolution of the product formerly known as Roundtable and offers a 360-degree panoramic view. The product can be used with the 8000 to create an enhanced group video experience. If you haven't seen Roundtable in the past, it's a weird-looking device (although the 5100 is aesthetically much more pleasing than earlier releases), but does create a unique experience.

In addition to these enhancements, Polycom's more traditional group video collaboration systems are now optimized for Lync environments. This means users can standardize on the Lync interface to invoke video sessions on desktop, room-based or group systems.

Polycom has focused a tremendous amount of its go-to-market energy around Lync and the native interoperability the company has with Microsoft.

There's a fair bit of industry chatter making the claim that "video is dead." The proof point to the video skeptics is that the box counters all have the video market in decline. However, it's only the hardware segment that's getting counted, and not the growth in services and software. Not only do I believe that video is alive and kicking, I think the usage of video is higher than ever before.

It would be more accurate to say that video is evolving and the growth is in software platforms such as Lync. However, my belief is that as customers get more comfortable with desktop and mobile video, we'll see a resurgence in group systems, telepresence and other hardware platforms as companies begin to expand the use of video to make it pervasive. I was glad to see Polycom take more of a balanced view of video and the Lync opportunity, and ensure all the products, hardware and software are Lync-compatible. The Lync wave is well underway, and Polycom should continue to ride it.