Phone Latency is Killing Me!

We have gained untold flexibility by moving voice to the IP network, but we may be forgetting an important lesson the PSTN fathers understood well. To measure just how bad it can be, our blogger enlisted his brother, a professional cellist.

Two years ago Sorell Slaymaker said to me, "watch out for VoIP latency". Recently this has hit my one-man office in a big way.

Last June I packed up my office and home, and moved to Maine. I decided to try to set up my new office without a PSTN phone, given that I would be paying for a high speed Internet circuit anyway, and I am supposed to know about VoIP stuff. I wasn't too worried about moving or changing phone numbers because I use GoogleVoice as my main business phone, and so I could point it to any solution I put in the office.

So I signed up with BroadVoice to have a SIP phone, fought with the configurations and got it running. I also signed up for a SkypeIn phone number and traded in my slightly rusty Treo 700p (Sprint) for a new Verizon Wireless Droid (it announces that it is on Verizon Wireless every time I turn around!)

I enabled the GoogleVoice functionality on the Droid because I thought it would be great if the caller-ID that users saw when I called was my GoogleVoice (main business number) rather than the local Maine number on my phone. Skype also allows me to do this. BroadVoice does not let me do this, but I was pretty happy with two out of three.

I almost immediately noticed that calls from my Vz Droid, through Google Voice, had a lot of latency. It really interfered with the conversation. I like a quick back and forth conversation, and this is where latency really comes into play. We naturally try to interrupt each other during a pause or an inhale. But if there is sufficient latency, by the time the listening party hears the pause, the speaker has moved on, and the interruption really interferes with the conversation.

This latency phenomenon is well understood and documented in the standards, and is used as a part of the calculation for mean opinion score (MOS). Here is a rough breakdown of what is considered good, bad and ugly in the latency area:

Later I noticed some of the same effect on the BroadVoice (SIP) phone as well. It is exacerbated when you are on a conference bridge, because the bridge creates additional latency in the call.

So I started a little project to measure this latency. Not having a lab with all these different phone types, I had to do fieldwork, so to speak. I worked out a methodology of using two metronomes, one on each end of the call, and synchronizing them so that they sound like they are ticking together on both ends of the call. By speeding them up (together) or slowing them down, we could then find the point where the two ticks overlap, and the period of the ticks will represent the round trip time (2 times the latency) of the connection.

Needing someone with a good ear, I roped in my brother Eric. He has good credentials for an accurate ear as he is a professional cellist with the New York Philharmonic.

My hope was that I could find some smoking gun and point my finger at something (BroadVoice? Skype? GoogleVoice?) but I didn't have much luck. This table shows my results. 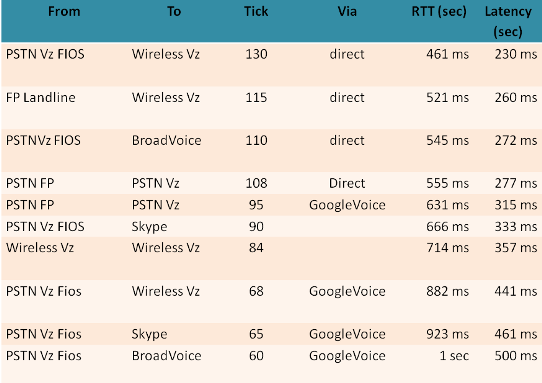 My results were not very consistent. We didn't test exhaustively, but it seemed like different times on the same combination would yield different results. Also, latency would change during the call in some cases, starting out better and then degrading, or starting out bad and improving.

But either way, even my best results are not great. All these calls were made between mid-coast Maine and northern New Jersey, so the speed of light was not a big factor here (about 3.8 ms). So there is a lot of something going on somewhere along these paths slowing down the signals.

Our fathers chose to build a synchronous voice network specifically to minimize this latency problem. We have gained untold flexibility by moving voice to the IP network, but we may be forgetting an important lesson they understood well.

If you call me, I will answer on my recently installed FairPoint landline.