Pexip and the Infinity Video MCU

A group of top execs from the former Tandberg make a play for video delivered by a software MCU on virtualized servers.

Because we are both technically minded, whenever Cisco's Laurent Philonenko and I meet at an industry event we discuss the latest good books we have read. Laurent recently pointed me to a book by Brian Greene titled, "The Hidden Reality: Parallel Universes and the Deep Laws of the Cosmos". It is quite a page turner as it goes through the physics of string theory and discussions about quilted universes, Swiss cheese universes and even an infinity of universes.

With this backdrop, I was quite interested when a new startup out of Norway called Pexip contacted me asking for a briefing about a video product branded "Infinity". Infinity is a new software-based video MCU designed specifically for scalability, high performance, and interoperability.

There has long been connection between Norway and video communications through Tandberg, which was one of the leading video conferencing companies until it was acquired by Cisco in 2010 for over $3 billion. Pexip was founded by the same video conferencing and telepresence experts that ran Tandberg.

At the Pexip helm is Simen Teigre, CEO, who was a VP at Tandberg. Joining him is Håkon Dahle, CTO; Håkon was CTO at Tandberg before transitioning to CTO of Cisco's Telepresence unit after the acquisition. They are joined by other former key Tandberg colleagues including 20 top video developers and four top-performing Tandberg sales leaders.

Infinity is interoperable with H.323- and SIP-based room and personal video endpoints as well as with Microsoft Lync 2013/2010 and with WebRTC (full integration with WebRTC will come as the standard solidifies more). It supports H.263, H.264, H.264 SVC and VP8 video codecs and can transcode between them; thus, Infinity conferences can include endpoints from a number of different manufacturers and systems in a single conference. Pexip said that it is extremely easy to "plug in" new codecs (VP8 integration took only a few days) and that transcoding performance between codecs is very good (low latency).

Licensing for Infinity comes in two flavors: per port and per user/month. Both are subscription licenses. The per port model is likely more familiar to the video conferencing industry in that once the port capacity is reached, no additional endpoints can be added.

The user/month model is more for very large deployments and resembles a software site license where you would obtain licenses for a specified number of users, with compliance and verification of adherence to the licensing terms coming at infrequent intervals. In the user/month model, every user can have their own video meeting room on the Infinity server, much like individuals can have their own "meet me" number on an audio conferencing bridge.

The subscriptions for both models require 12-month contracts which are renewed annually. Between renewal periods, organizations can add licenses, but they cannot remove licenses.

Pexip claims that the cost of Infinity will be up to 80% less than the cost of hardware MCUs. While pricing was not announced, the company said that people can think of paying for Infinity about what they would pay for just the annual maintenance on a hardware MCU. The company's go-to-market strategy is 100% through partners, and these partners will also receive part of the recurring revenue stream.

When the system is provisioned, any particular user's endpoint is homed to the "closest" local or regional Infinity server. When a video meeting starts, all of the endpoints join the meeting at their local "home" server. If the system detects that multiple servers are involved in the same meeting, these Infinity servers automatically connect to each another. Between servers, the video streams are encoded as H.264, hence some transcoding may be required on both ends. The active speaker's video remains at HD quality across the WAN while the video of those who are not speaking is reduced to thumbnail size that is approximately 10% the bandwidth of the full HD stream. This is how Infinity conserves bandwidth across the WAN.

The capability to have multiple MCUs in a single video meeting is often called "cascading" in the video industry. The difference here is that the video is not mixed prior to traversing the WAN--every stream still traverses the WAN, but non-speakers' video does so at a significantly lower bandwidth. 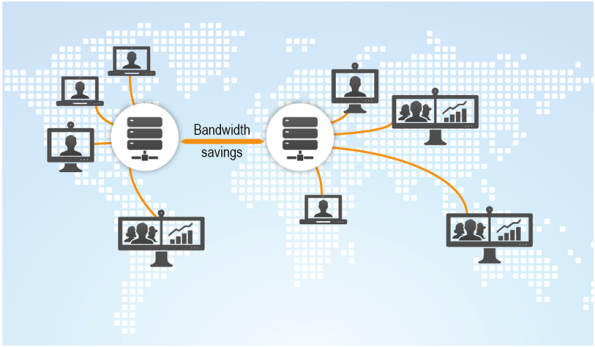 1. It shows a roster of who is in the call.
2. It adds a level of conference control (mute, eject, dial out, etc.).
3. It allows participants to view a presentation if one is being used in a meeting.

The massive scale we are about to see in software video endpoints through WebRTC bodes well for Pexip and its new software-based MCU. In a recent paper on the video market, one of the conclusions I stated was, "The future of pervasive video is clearly in software-based multipoint infrastructure."

We are seeing this same trend from other video providers including Vidyo (a virtualized Vidyo router), Microsoft Lync 2013 (software based MCU inside and media router), Polycom (RealPresence Collaboration 800's software-based MCU and media router), and video service providers like Vidtel and Blue Jeans Networks. Although Pexip Infinity is designed for on-premises deployment in enterprise datacenters, service providers could, in principle, also install Infinity and offer it as a managed service.

Pexip is making its Infinity MCU available as of today in North America, Europe, Latin America and Russia. Given that the company executives and sales team already know almost everybody in the video business, look for Pexip to be a strong competitor in this new era of pervasive software-based endpoints and the necessary supporting multipoint infrastructure.