Peeling Back the Layers of Wiring Infrastructure

Cleaning up an infrastructure may not be on your list of most-exciting projects, but best practices dictate that you not ignore the chore, either.

When we consider network infrastructure, sometimes we say we need to "clean house" before we update. But that can be a misnomer, because what really needs doing is correction of all the layered-in generations of infrastructure gone wild.

Installations and infrastructure demand good housekeeping, but most IT best-practices guidelines don't cover existing or grandfathered infrastructure the way they should. IT folks are challenged on how to:

In the photo below, you can see how anyone tempted to just rip it all out could be blindsided by any number of problems. Scores of cross-connects and old wiring intermingle with three types of protectors. An old, unused network interface device (NID) tangles with jumpers and 25-pair cables bridging to connectors. Then there's outside plant and biscuit jacks for devices, and beanies splicing wire pairs. There's grounding, too, but you need to follow it out to dark places to find its origin. 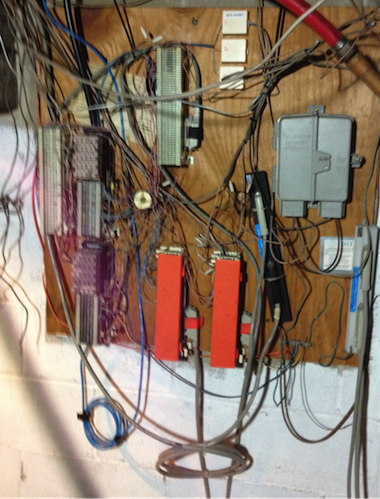 The 66-block connectors and RJ21X NIDs don't help either, since their labels are distorted from mark-overs and cross-outs. You can even see abandoned remnants of an aerial cable spliced to another location on the property before it exits the second-floor roof. Painstaking as it may be, you'd have to go through the process of identifying every pair of wires and where each cable ends up.

If you can't follow this trail of "speak," then you need to proceed with extreme caution. Actually, even those who can follow the trail need to do the same.

All this stuff, layered in over decades, is typical of the scenario at many businesses and, yes, enterprises that don't mind their infrastructure.

Ignorance Is Not Bliss
Now, the first step in coming to terms with this mess is acknowledging that it won't go away and can't be removed. IT folks will have to learn to handle this, and not merely dismiss it with an, "It's telecom." No, it's yours.

Vendors and carriers often mismanage outside plant (OSP). They simply don't care about housekeeping, and when the house isn't in order, you can bet that most will not voluntarily clean it up or make improvements.

Identifying every pair/circuit is akin to taking inventory. Documentation is a process but it pays dividends. After identifying the OSP pairs and determining what's working and what's not working, you may find that some pairs are tagged as "do not use," "bad," or even "defective." Running down cross-connects from OSP is time-consuming, but again, you can identify each pair and then determine whether or not it is still in use and, if so, to what cable, jack, or device it connects.

Continue this process and you can easily identify cables, see where they go, and determine whether you should remove or preserve them. Cables terminate somewhere, and if documentation is inadequate or nonexistent, finding them is a process of elimination. Either way, it's not hard -- maybe intimidating to some, but again, you'll see a payoff in continuing the process.

When you do end up with an inventory of OSP pairs and circuits, cables, and equipment/devices, you can then begin to migrate.

Some of the old cabling will remain, but it will get new life by following simple housekeeping and IT best practices. It's not complicated... and it's not a task that should be left ignored until along comes the next guy. Taking charge of infrastructure and then migrating what you inherited is a necessary task for moving forward.

The Payoffs
As for the dividends: learning by doing. Sure, everyone fails along the way. Either way, you will learn and succeed. In addition, cleaning up an infrastructure and making it useful will reduce service time to repair/restore simply because you'll end up knowing the location of cable pairs and cables. Inventory of gear, systems, and devices will reveal how IT can make directed improvements and migrations.

Change is a constant that, when managed properly, will strengthen your business by negating the potential downsides that service disruptions and equipment failures can press upon your company.