Over a Billion Voice Customers Served

When I was growing up, I remember seeing the signs on McDonald’s restaurants that proclaimed how many billions of hamburgers had been served.

With the reporting of Cisco's objection to the Microsoft and Skype merger (Cisco launches a Salvo at Skyprosoft and Cisco Appeals Microsoft-Skype Approval in Europe), it got me to thinking that part of reason Cisco needs to object is that Microsoft could rightfully hang a sign outside its Redmond headquarters proclaiming "Over a Billion Voice Customers Served". Andrew Davis further explores Cisco's objection in his article "Cisco Redefines Chutzpah.

Back in July 2011, I tallied the number of users interconnected through various tools that bypassed the PSTN and dubbed this amalgamated user community the Public Collaboration Network. At the time, Microsoft appeared in the lead. For me, The Rise of the Public Collaboration Network provided millions of people the ability to communicate and collaborate without using the PSTN.

Just over six months later, Microsoft, according to my imperfect math, still appears to be the leader and potentially could choose to federate or integrate over a billion users. Below are my calculations: 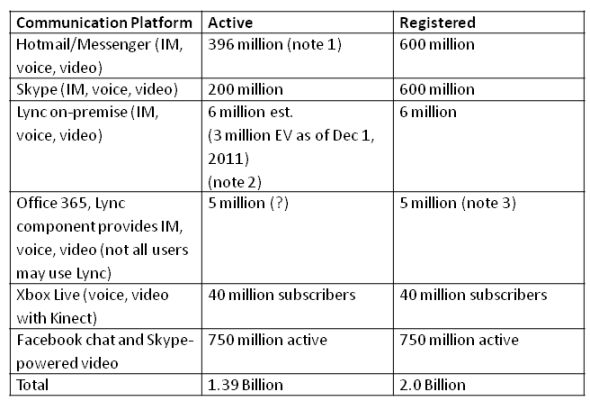 I surmise that reaching a billion connected users will provide unique powers, somewhat like Skynet, the fictional network from the Terminator movie fame that achieved self-awareness once a critical mass had been reached. However unlike Skynet, I see this large federated UC community as a predominantly positive thing.

Alternatively, Facebook alone could be a potent competitor for Microsoft as the PCN leader. In fact, if you remove Facebook's user count, Microsoft would be at a paltry 647 million interconnected users. However with Microsoft owning 1.6% of Facebook, so far the Microsoft + Facebook collaboration has seen both organizations working together against other competitors (namely Google and Apple).

It is also true that according to a January 2012 earnings call, Google now has 350 million active users. Impressive but not close to the "billion club". No "Skynet AI" happening here, yet.

Apple has a tight Facetime ecosystem but even if it sells the projected 65 million iPads this year the total iOS user base would still be only 265 million, and even with another 60 million or so Macintosh computers, this totals 325 million. Once again, not close to a billion. Also, many of these 325 million Apple users make use of Skype (which really improves the Microsoft tally).

Even after considering the alternatives, I think we are left with Microsoft as the leader of a potential 1 billion-plus-member community of collaboration users.

I suspect that a large portion of Cisco's opposition to the Microsoft-Skype combination is a result of Cisco doing the math and realizing that Microsoft is first and foremost pursuing the "Interoperability through market dominance" strategy I wrote of late last year. Perhaps Cisco realizes that Microsoft could become the "Big Mac" to its "Burger King". And who really wants to be that goofy King dude?

The ability to federate and communicate across organizational boundaries is huge. The PSTN let us talk to anyone anywhere, provided we knew the magic ten digits (or a few more internationally) to press. Text messaging became the real new voice in 2008 when the number of text conversations exceeded the number of voice conversations; interoperability, aka federation across carriers, allowed this to happen. Email exploded when everyone was interconnected with everyone else.

Interconnecting UC is more challenging. To truly be interconnected, users expect more than just the ability to share instant messages and presence--the kind of interoperability XMPP bridges are limited to today. The true benefit of federation is the ability to connect all UC modalities: IM, presence, voice, video, web conferencing, desktop sharing. This is what OCS/Lync provides today.

And it seems that the number of organizations that allow and support Microsoft federation is growing. Matt Landis's Lync Federation Directory at last count listed over 5,800 domains. A parallel Lync Federation Directory started by Julian Bee lists around 600 organizations. In practice, most of the colleagues, customers and suppliers I deal with I can connect to using Lync. To me this signals the true rise of the public collaboration network.

I would be interested in thoughts and comments related to this collaboration "Skynet". Please comment below or via twitter >@kkieller Lync and Skype are "hot" technologies. Please join me at Enterprise Connect in Orlando on Monday, March 26th 4:15 PM for my "Living with Lync" session and again on Tuesday, March 27th 3:45 PM for my "Skype in the Enterprise" session.