Enterprise IT Infrastructure Spending on the Rise

Cloud and software continue to impact enterprise IT spending on collaboration infrastructure.

Michelle Burbick
Adoption of cloud services continues to influence enterprise spending, including that earmarked for collaboration, as newly released Synergy Research Group (SRG) data shows.
Data released by SRG this week shows that enterprise spending on IT infrastructure increased by 13% on average in 2018, as gleaned from analysis of six key enterprise infrastructure segments. As shown in the below chart, spending on hosted and cloud collaboration infrastructure saw the second highest growth for the period (Q4 2017 to Q3 2018), landing just above the $25 billion mark, up 22% over the preceding four quarters. This growth is due, in part, to decreased spending on premises-based collaboration products, SRG said. For the same period, on-prem collaboration spending reached just over $15 billion, decreasing 4% over the preceding four quarters.
As expected, this latest spending dip on premises-based collaboration continues the “slow and gradual erosion that has been happening over quite a few years,” SRG confirmed when I reached out for commentary on the data. 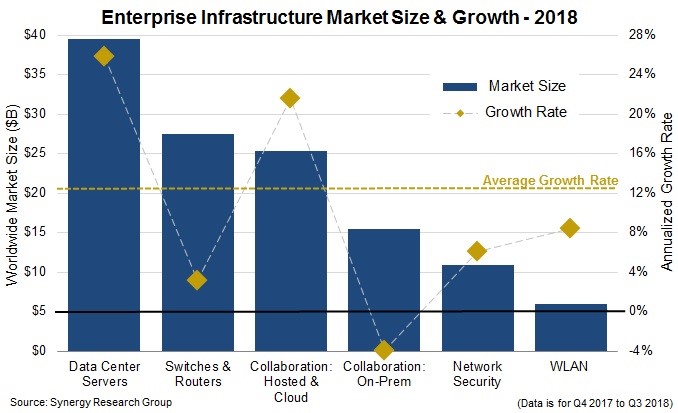 Cisco remains the dominant enterprise vendor, maintaining a leadership position in almost all of the segments analyzed, SRG said in its report. For on-premises collaboration infrastructure, it’s joined by Microsoft, Avaya, and IBM. For email-related hosted and cloud collaboration infrastructure, Microsoft and Google lead the market – no surprises there. For all other hosted and cloud collaboration segments, Cisco, Twilio, RingCentral, and Vonage are market leaders, SRG told me.
While decreased on-prem collaboration investment played a part, other drivers attributed to the growth in hosted and cloud collaboration spending. Team collaboration apps, communications platform as a service, and file-sharing services are among the highest areas of growth, SRG said. These aren’t replacing mature on-prem products, but rather are satisfying emerging demand for new applications and services, SRG said.
Looking Ahead
Another market study, Spiceworks’ 2019 State of IT, sheds some light on how we might expect enterprise IT infrastructure spending to look moving forward into the new year. In surveying more than 700 business technology buyers in North America and Europe, Spiceworks found that business revenue is on the rise and forecasts continued growth in IT budgets.
Specifically, 89% of companies surveyed expect their IT budgets to grow or remain level in 2019. Large enterprises (1,000+ employees) are the most likely to increase their IT budgets, Spiceworks reports. Fifty-six percent of companies with more than 5,000 employees reported expecting their IT budgets to grow in 2019.
The biggest driver of IT budget increases in 2019, across all company sizes, is the need to upgrade outdated IT infrastructure, the report states. However, enterprises with more than 5,000 employees said their primary driver is the need to get new technology features -- “perhaps because larger organizations … can afford to stay current on the latest tech,” Spiceworks said.