Global Connect 2008, the annual Nortel Enterprise customer conference, was held this week in Grapevine, TX. Nortel reports that attendance was up 41% over 2007 - making for a very happy team of Nortel executives.

The mood of the meeting was near-ebullient. There is a strong sense that the tide has turned- after some clearly troubled years, enterprise revenues have been up for seven consecutive quarters. The Microsoft relationship has not led to the demise of Nortel as we know it, a scare tactic used against Nortel by competitors after the alliance was initially announced. The relationship with IBM, less often in the spotlight, continues to flourish and plays a key roll in Nortel's deployment of Agile Communication Environment (ACE).

The Nortel Agile Communication Environment is a software-based foundation environment that helps enable communication capabilities such as click to connect, location, presence and/or instant messaging, to be presented as services in a web-based environment so that they can be integrated into business applications and processes. In its initial deployment, ACE is being delivered on IBM's WebSphere Application Server. (In the future it will also be available integrated with other vendors' web services frameworks.) 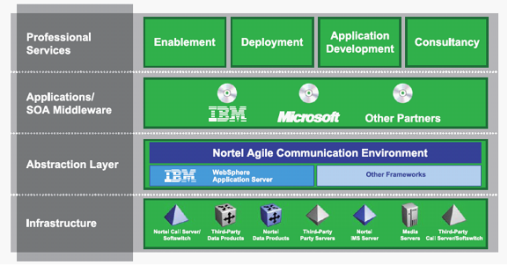 Probably the solution on the market that most closely compares to Nortel's Agile Communication Environment is Avaya's Communications Process Manager, part of the company's CEBP solution set. Based on discussions with Nortel at this week's event, ACE also appears to include federated presence capabilities that Avaya makes available in a separate product, the Intelligent Presence Server. Federated presence is key for environments where users may choose disparate clients, e.g., some using Microsoft's Office Communicator, others IBM SameTime, etc.

One of the core messages for both the Avaya and Nortel solutions is to solve the problem of "human latency" in business process, that point where a process comes to a standstill because some human has to intervene for the process to continue. An example used by Nortel is the situation where several doctors have to agree on the discharge of a patient. Delays in this process could be avoided via a process to allow a response to an IVR or voice portal response (press 1 to authorize discharge, press 2 to request additional data, etc.)

According to Richard Tworek, Nortel's VP for Next Generation Unified Networks who's in charge of ACE , beta sites have already been deployed. Nortel's Agile Communication Environment is scheduled to be generally available in July 2008.