While "mobile first" has been all the rage, at this point it seems to amount to little more than a slogan.

As 2015 Enterprise Connect approaches, I'm particularly looking forward to the Mobility Summit that I'll be co-moderating with No Jitter editor in chief Eric Krapf on the question: mobile first -- a slogan or a strategy? While we'll be discussing this topic with a distinguished set of mobile industry executives, a recent Gigaom Research survey on the 2014 state of enterprise mobility has me leaning toward the former rather than the latter at this point.

While "mobile first" has been all the rage, we just don't see the level of activity, particularly on the applications front, that indicates it is anything more than a slogan. We see this in the Gigaom survey: While 82% of responding organizations said they are using mobile email, no other mobile application reached 50%. Conferencing, which Gigaom identified as Skype or GoToMeeting, was the second most widely used app among survey respondents. Not surprisingly, I identified conferencing as the one bright spot in mobile UC in a blog earlier this month (see Do You Really 'Need' a Mobile UC Client?).

Some years ago I developed the visualization you see below to show the progression of mobile applications strategies in the enterprise, from email and personal information management (PIM), which is where everyone seems to start, up to customized line of business (LOB) applications. From what Gigaom found, it seems that enterprises are still clustered fairly close to the low end of that progression. 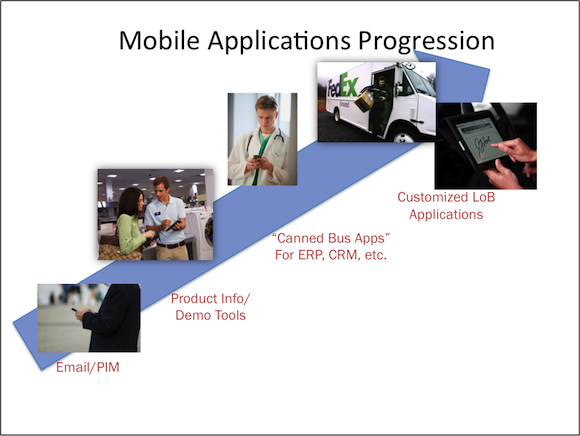 Many industries have adopted tablets as a convenient way for salespeople to display or demonstrate products, or are using pre-written apps from independent software vendors like Oracle, SAP, Cerner, McKesson, and the rest, all of whom have a library of professionally developed apps to allow mobile access to their backend systems. Users can simply download any of these apps from a public app store, enter the same credentials they use to log in from a desktop or laptop, and gain mobile access to the systems. These do represent a productivity booster, but it's hard to see them as transformative.

After all the talk, we really don't see many enterprises that have made bold moves such as FedEx did in 1986 when it introduced the SuperTracker handheld mobile computer and revolutionized the package shipping business. Even with the concerns over mobile data security, mobile device management/enterprise mobility management (MDM/EMM) aren't getting much traction, as InformationWeek found in its 2014 Mobile Security Survey. Less than half of respondents reported that they've deployed MDM/EMM tools; instead, respondents said they rely on users to adhere to IT-defined security mandates -- what happened to "trust but verify?"

The big question around all of this is, "Why not?"

Money is probably a big part of the answer. With budgets getting squeezed mercilessly, IT simply can't fund every initiative. Without a strong return-on-investment justification like we find with real transformative mobile business processes, mobile gets classified as a nice to have, not a must-have. Of course, if you don't have anyone looking for those opportunities, you're not likely to find them. In the meantime, you can find the money when there is a recognized business need -- which is why the penetration of those MDM/EMM systems is far greater in security-sensitive industries like finance.

Another big reason why not is that most companies haven't specifically charged anybody with managing mobility, and so nobody's looking. Even when working with companies on developing mobility policies and mobile security plans, I've found those efforts have typically involved an ad hoc team assembled for the project and summarily disbanded once that work is completed. In short, all parties go back to their day jobs.

With no money allocated, no one with the responsibility to ask for it, and nobody looking for intelligent ways to spend it, chances are slim that a company is going to move forward on any serious mobile initiatives. Users want smartphones and tablets and organizations either buy the devices or let the users bring their own but, beyond that, IT's not doing much about mobility.

Where companies are spending money and getting a good return on it is on the business-to-consumer, or B2C, front. The digital channel has become a new marketing target, complete with slick apps designed to showcase and configure products, take orders, and respond to customer inquiries. And behind these apps sit armies of interns tweeting and liking to maintain the company's digital presence. Presumably they're doing this because it pays off.

Fortunately the mobile malaise is not universal. A small percentage of companies really have looked to push business-to-employee, or B2E, mobility with vigor akin to what we see in the B2C area. Having worked with some of these companies I can assure you they have mobility policies, MDM/EMM systems and other mobile security measures in place, and most importantly, they have documented plans that identify areas where they hope to develop mobile initiatives. What's more, they interface regularly with LOB managers regarding how they can bring to bear these mobile technologies in improving their performance.

So in the end, it's not that we don't know how to make "mobile first" mean something, it's more that IT management is just not giving it the attention it deserves.