Microsoft: A 'Significant Disruptor of Collaboration'

Latest Synergy Research data shows Microsoft lapping at Cisco's heels in the overall collaboration market, and well ahead in the hosted/cloud segment.

A couple of primary tussles characterize the collaboration decision today: Cisco vs. Microsoft, and cloud vs. premises. So it behooves us to ask, then: What impact might we expect Microsoft's big push into the cloud, a la Skype for Business and Office 365, to have on each of these critical enterprise decision points?

Will Microsoft push ahead of Cisco as it makes cloud the center of its collaboration universe? And will its Skype for Business/Office 365/voice story make the cloud an easier choice for enterprise communications professionals trying to determine whether to ditch a premises installation?

This is certainly one way to think about the latest collaboration market data from Synergy Research Group, released this week for first-quarter 2015. The Synergy research shows Microsoft trailing Cisco ever so slightly in the total collaboration market, but well ahead of its chief competitor in hosted/cloud collaboration, as displayed in the graphic below. 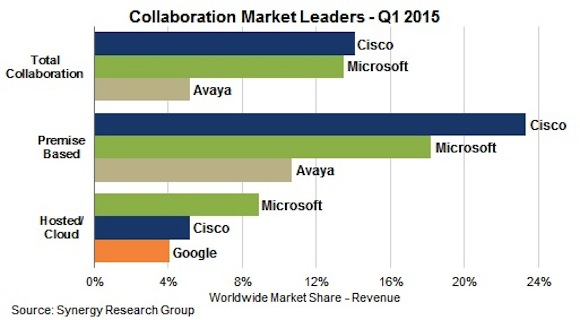 In a release on the findings, Synergy attributes Microsoft's overall gain in the collaboration market to the widening of its lead in the hosted/cloud segment, as well as to its continued strong premises positioning. Calling Microsoft a "significant disruptor in collaboration," Jeremy Duke, Synergy founder and chief analyst, said the company's "aggressive embrace of all things cloud is opening up ground for further disruption and market share advances."

Is Microsoft's cloud gambit lifting all boats? Synergy's 1Q data shows that, for the first time ever, total quarterly revenues from hosted/cloud solutions are higher than those for premises deployments. Hosted/cloud revenues are up 10% year on year, compared to a 2% loss in premises revenue. Among hosted/cloud options, Synergy's research showed that contact center, voice and UC as a service, video, and enterprise presence/IM enjoyed "particularly strong growth" in the opening quarter of 2015. At 51%, hosted/cloud solutions now account for slightly more than half of the total collaboration market, the firm reported.

Microsoft stands to gain as enterprises become more amenable to getting communications and collaboration from the cloud. "We believe that if Microsoft is successful in rolling out Skype for Business in Office 365, it could take its collaboration opportunity to a whole new level," continued Duke, in his press release statement.

But, of course, nobody expects Cisco to sit still as Microsoft nibbles away at its toes -- and it isn't. "... such threats are not going unnoticed and we see Cisco continue to refresh and reinvent its collaboration strategy," noted Duke, pointing to the recent Tropo acquisition and Spark rollout as examples.

Dismissing Cisco certainly would be foolish -- it showed strong quarterly growth, at 6% year on year to a 14% overall stake of worldwide revenues, for its premises business, and as Duke suggested, its collaboration initiatives are really starting to heat up now. I know many industry watchers, myself included, are eager to see where Cisco heads now that it has a passel of communications-savvy developers under its purview, for example.

Of course, Cisco and Microsoft aren't the only companies in the market. Avaya and Google hold the third seats in the premises and hosted/cloud segments, respectively, while IBM, Polycom, Verizon, Citrix, AT&T and Mitel also hold leadership positions, Synergy said. Overall revenues for collaboration products, "were once again well over $8 billion in the quarter."