In a June report, market researchers at T3iGroup laid out the results of its survey of 300 SMB and Enterprise business managers regarding Microsoft Lync Enterprise Voice deployments, which seems to spell good news for Microsoft market share--for the most part.

The recent published results mark the third installation of the study that began in February 2012. The 150 enterprise business managers participating in the study were broken up into two categories, medium-sized enterprises (between 500 and 2,499 employees) and large enterprises (2,500+ employees). I'm going to show you a few graphs from the report and provide a bit of analysis along the way. 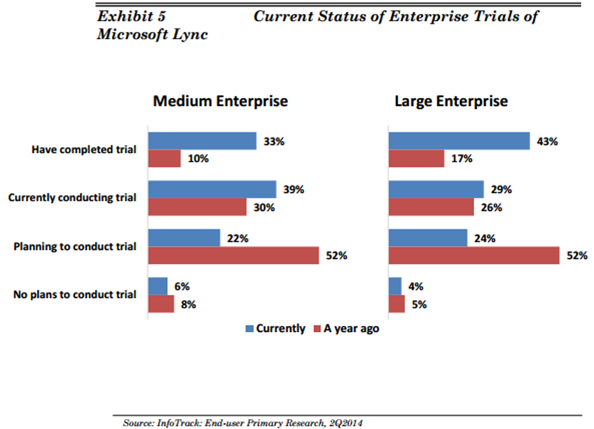 Perhaps more interesting, however, is the percentages of these trials that include Enterprise Voice, shown in the figure below. With nearly 90% of enterprises including Enterprise Voice in the Microsoft Lync trials, this marks a slight increase over last year. 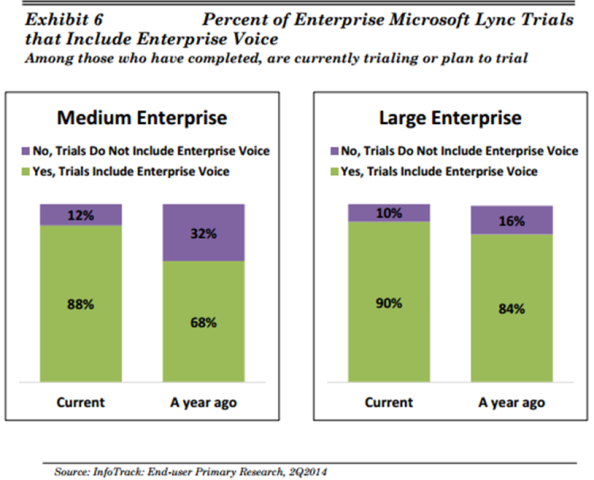 But what does this mean? Additional data in the report shows that trialing of Enterprise Voice positively impacts perceptions of its capabilities. Prior to trials, 43% of large enterprises asserted Microsoft is better than most traditional voice system manufacturers. After trialing, this number went up to 57%.

This all spells positive news for Microsoft and Lync, with more enterprises deploying trials and moving forward with procurement. Taking a look further, however, the picture is not quite as clear.

Cost Implications
Cost is often discussed between analysts and business managers when considering which vendor to go to for procurement decisions (See Cisco Vs. Microsoft: Cost Components Require Deep Dive). The InfoTrack report also looked at costs in two different lights: startup costs and ongoing. The results for startup costs are in the figure below: 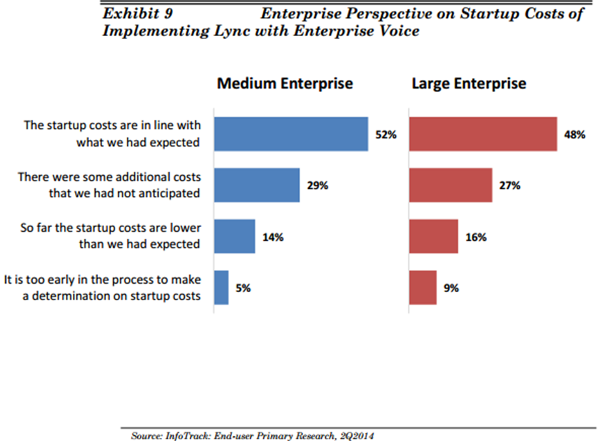 This figure (above) indicates that roughly half of all enterprises said the startup costs are in line with expectations. While this a significant majority, that still leaves nearly a third that indicated additional unexpected startup costs.

The figure below paints a similar picture. While just over 40% said ongoing costs lined up with expectations, 26% of medium enterprises and 38% of large enterprises indicated there were additional ongoing costs that were not originally anticipated. 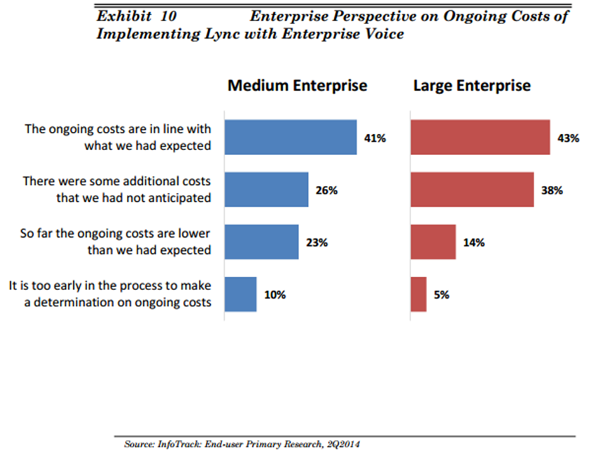 If there were unanticipated startup costs and additional ongoing costs for a significant portion of the enterprises trialing Microsoft Lync Enterprise Voice, it implies a higher TCO than planned. While we are discussing trials, it is interesting to note the respondents' plans for continuing further with deployments. Only 14% of large enterprise respondents indicated that their plans depend on the results of the trial. I might have thought that portion would be bigger, if trials are meant to determine whether--or not--larger deployments should be undertaken.

On the other hand, last year's survey results showed that 31% of large enterprises' plans for moving beyond trials depended on the results of the trials--this decrease could also indicate a growing trust of the Microsoft Lync platform over the last year.

An additional part of the report asked enterprises to rank reasons for deploying Microsoft Lync Enterprise Voice beyond trials. Both medium and large enterprise respondents put their No. 1 reason as "Total cost of ownership (hardware, software, service support) is lower than PBX-based solutions." If enterprises are choosing Microsoft Lync Enterprise Voice for lower TCO, but significant portions are finding TCO to be higher than expected, this does present a somewhat unclear picture of Microsoft Lync's future. Perhaps, if more weight is attached to trials moving forward, and the trials reveal higher costs, some deployments could be stopped short of larger scale rollouts.