Enterprise IT needs a strategy to embrace new technology while maintaining old systems.

You have many devices in your networks. Some are designed for long-term use and others for short-term use. Some of your devices -- such as embedded systems, medical devices, and IoT endpoints -- rarely get software updates. Other devices and systems are continually receiving operating system upgrades and patches. These upgrades may be to improve performance but more often than not they deal with fixing security weaknesses.

What You Have Works

If your system and devices do not require many software upgrades, you can expect that they will have a long life. On the other hand, I have encountered systems where in order to install the next software upgrade, I have to expand the memory and processing capacity or replace the system, otherwise the upgrade will not work.

Embedded systems that operate with Linux, for example, are not typically designed to be updated after they are implemented. In this case, an upgrade may mean a complete replacement of the hardware or firmware.

This upgrade dynamic drives enterprises to keep the system and software they have as long as possible, as long as it continues to support the goals and requirements of the enterprise. You may find that parts of your network and endpoints will continue acceptable operation for years, and so they remain, because the alternatives are either expensive or too disruptive.

Some of your devices and systems, however, may be heading toward a dead-end. Their applicability may become less useful over time, and the longer you've had them, it's more likely that security will be weaker and if you leave them alone, attackers will find it easily and compromise it. You may have to replace the systems and devices so that they have the capacity to implement the security upgrades.

The devices and systems you have installed that are working acceptably may still encounter problems when they have to interact with newer operating systems, hardware, and communications protocols. If the devices you have are old, they may have serial or parallel ports for accessing data. It's unlikely that new devices will have this capability. You must keep operating the older devices so they can directly connect to the new technologies. If you have fixed-function devices that do not support wireless protocols, they may not be upgradable to support the new interfaces.

Most networks today are designed for the traffic we've encountered in the past. The growth of unified communications with video conferencing started taxing the networks because of the high bandwidth requirements. Quality of Service (QoS) requirements for both internal and provider networks have become more important as we communicate in real time with voice, video, and screen sharing (see "Voice & Video Performance SLAs: Do Yours Deliver?").

If we add Internet of Things (IoT) traffic to the mix, the traffic patterns change again. Most IoT traffic has low priority, but there will also be high priority IoT traffic that requires immediate response because of security, safety, or performance reasons.

Those who design the network will see an increase in traffic that requires QoS. If bandwidth is not increased, then the low priority traffic will be delayed even more than it is today. Don't forget that there may be issues with LAN switches and routers. It may be not enough to upgrade the software. You may have to replace the equipment to support the higher performance required by the additional traffic. 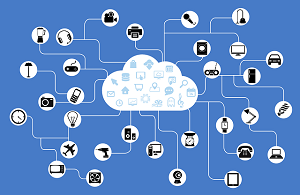 Is Your Network Ready for IoT?

Numerous IoT devices are already on the market, and new ones are introduced every day. Most of those IoT devices have been designed to be low cost so that enterprises can implement hundreds to thousands. This presents a problem because they are typically not built to be that upgradable. It's quite possible that upgrading means replacing the devices. Although IoT devices are inexpensive, the quantity of devices that need to be replaced can cause budget problems.

Traffic from IoT devices is not like typical user traffic. Some of the devices will be periodically sending small packets, while other devices will be continuously streaming. Another class of devices begins with low traffic volume and then when an event occurs, the device converts to continuous streaming during the event.

If the devices are communicating over wireless networks, you may encounter considerable transmission errors that then cause an increase in total traffic. It's not unusual for Wi-Fi networks to have corrupted or lost packets during the transmission, thereby producing 10% more traffic than expected.

Can IT Solve the Problems?

IT needs to establish effective device lifecycle management policies before implementation. If your enterprise has older technologies that you want to continue using, it should be relatively easy to find staff expertise for older technologies. Unfortunately, a lot of people consider their careers when specializing and don't want to learn about the old technologies. IT should cross train staff in both the old and new technologies to ensure they're adequately covered in expertise.

Another choice is to look at the devices and software and determine whether it's worth buying them at all (see "When and Why to Lease or Buy"). If you think the technology that you have is going to have a three-year life or less, consider leasing that technology. The more expensive the technology, the more likely you can lease it. On the other hand, it's unlikely that you can lease IoT devices. They will have to be replaced when their life comes to an end.