Lync and the Death of the Desk Phone

It appears that the voice business is splitting into two distinct segments, one that essentially follows the traditional PBX market and one that takes a new trajectory defined by the capabilities provided in what we now call UC.

A survey by ConnectSolutions, a provider of hosted Microsoft Lync unified communications (UC) solutions for small business, enterprise and government, has provided some interesting insight into the future of desk phones with the advance of UC. The survey results posted on the company's blog page indicate that the vast majority of their users who deploy Lync use PC-based soft clients rather than traditional desk sets to place their calls; mobile UC clients remain essentially a "no-show."

The data from May 2014 indicate that 78% of calls placed on the company's hosted Lync service used a Windows-based Lync client, and another 3% used a Mac client; a mere 18% used a hardware desk phone. Only 1% of the calls were placed using the Lync mobile client. With a total of 81% using a desktop or laptop soft client, it is clear that we are dealing with a new type of user when we're looking at Lync.

These results are even more dramatic than what we saw in the Information Week 2014 State of Unified Communications survey of 488 IT professionals. That study looked at all UC deployments and not just Lync, and found that when we looked at the total market, 14% of respondents who deployed UC had no desk phones and another 14% had 10% or fewer users with desk phones. Only 30% reported having desk phones for 76% to 100% of users. 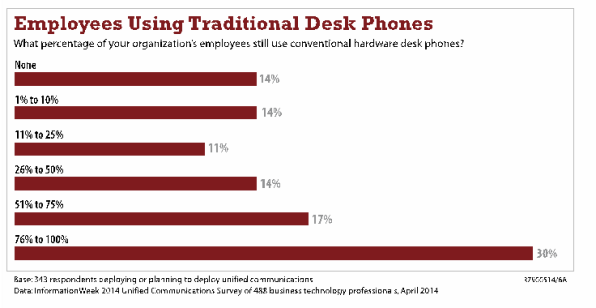 I'm not prone to hyperbole or assertions that the desk phone will totally disappear - that's not how markets work. I believe what we are seeing is that the voice market is dividing into two distinct segments, and the soft phone experience is very appropriate to one of them. That UC/soft phone demographic is focused on knowledge workers who spend a significant portion of their work day in front of a PC and for whom making phone calls through Outlook or Lync client is simply a more convenient way of getting things done.

UC can provide users with that new and different type of communications experience, but that new experience isn't appropriate or attractive to all users. The ConnectSolutions survey found 81% of voice calls migrating to soft phones, not 100%.

As an Office 365 Lync user, I don't get PSTN access (at least not yet), so I'm still looking up phone numbers in Outlook (or more likely on my iPad that provides vastly better performance than Outlook on Mac) and then dialing them on my cable company-provided desk phone; I only get to use Lync calling to/from my Lync correspondents. As soon as I can get PSTN access and port my office number to Lync, I'm there.

Of course, not all users warm to these new capabilities at the same rate (hey, there are still BlackBerry fans out there!). Many users will recognize the convenience on Day One and make the shift to the soft client, and others will follow in due course. As long as we allow choice (and we should), nothing is ever going to be 100%, but clearly what the ConnectSolutions survey is showing us is that the vast majority of real UC users take the soft phone option.

There are some voice scenarios that do not play to Lync's strengths. That would include installations that require a high percentage of analog 2500-sets, and these customers will continue to buy traditional PBX solutions. That would include non-contact center personnel who spend a lot of time on the phone; or phones installed in lobbies, hotels or hospital rooms. Those use cases get little benefit from a solution like Lync.

I've sat through any number of vendor presentations describing wonderful new revenue-producing services that hotels could offer using UC-like capabilities on in-room tablets, but the reality is that most hotel guests are using their cell phones (with their integrated address books and other UC-like features) for just about all their calling needs. I do like the in-room tablets for things like opening the drapes, adjusting the thermostat or controlling the TV, but I really don't think that qualifies as "UC." If they could add room service ordering and wake-up calls to the tablet (some have), the hotels could probably forego in-room phones all together just like universities have with dorm room phones.

The other thing that the ConnectSolutions survey tells us is that mobile UC clients continue to be a bust. I have expressed some hope that while other mobile UC solutions had been an unmitigated failure, Lync might offer the last hope for a meaningful mobile capability in UC. With only 1% of the voice calls using the Lync mobile client, it appears this hope is not being borne out. Lync is coming at the voice requirement from a different angle, but it seems Microsoft is having no more luck at migrating users from their native smartphone UC capabilities than any of the other traditional PBX vendors have had.

In the end, it appears that the voice business is splitting into two distinct segments, one that essentially follows the traditional PBX market and one that takes a new trajectory defined by the capabilities provided in what we now call UC. Both will have a place in the world for the foreseeable future, but clearly, the growth in UC is coming at the expense of that traditional PBX market. And in the mobile space, both are losing out to the native smartphone experience.