Vidyo and Google integrate Google+ Hangouts with the rest of the video universe, as well as enterprise PBXs.

In collaboration with Google, Vidyo announced today both a product and a service that will allow H.323- and SIP-based video devices to interconnect with Google+ Hangouts. Google claims that more than 5 million businesses use Google Apps, so this announcement has significant implications for Vidyo. It also carries some implications regarding where Google is going with WebRTC.

A Little Background
For those unfamiliar with Google Apps and Google+ Hangouts, some background information may be helpful. Google Apps are cloud-based applications that compete with Microsoft Office. The Google Apps suite includes Gmail for email; Calendar for scheduling and tracking appointments; Docs for word processing; Sheets for spreadsheet capability; Slides for creating presentations; and Drive, which is a cloud-based file storage facility.

Google Plus (Google+) is a social layer on top of other Google services that provides communities, links to friends and family, plus a voice and video capability called Hangouts. Google+ Hangouts allows up to 10 people into a multi-person voice and video call for no additional fee, (as opposed to Skype, which charges a fee for multipoint video). Hangouts works in browsers as well as on Android and iOS devices.

Google is one of the key players in the WebRTC initiative, and Google is pushing its own VP8 codec very strongly. Consequently, Google removed H.264 technology from Hangouts and inserted its own VP8 codec. This allowed Google+ Hangouts to display 720p HD video, which makes Hangouts users believe they are getting a new and better product (although a non-SVC codec may have some issues on a congested network). With VP8 as part of Google+ Hangouts, users who have Google Chrome, which is equipped with WebRTC, no longer need to download the Hangouts plug-in, because they already have VP8 within the WebRTC components built into the browser.

Implications of the Announcement
A number of organizations have adopted Google Apps and Hangouts, but many of these organizations have SIP-based and H.323-based group or personal video units. Today, Vidyo announced it has developed a Hangouts gateway branded "VidyoH2O for Google+ Hangouts" that allows these H.323 and SIP video units to connect into a Google+ Hangout. The device also allows telephones connected to the enterprise PBX to join a Hangout.

The "H2O" in the product name implies "Hangouts to Others", meaning Hangouts to other video devices. VidyoH2O will be promoted by Google's 6,000 business channel partners worldwide. 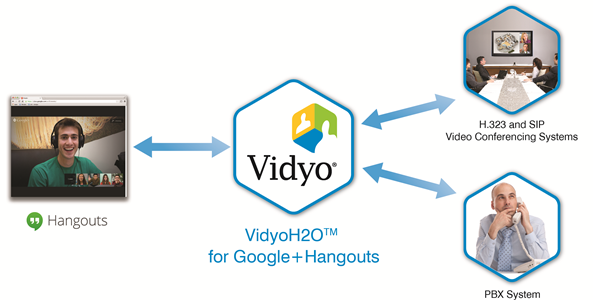 Figure 1. VidyoH2O will allow H.323 and SIP video endpoints as well as PBX voice to integrate with Google+ Hangouts

VidyoH2O will be sold by subscription as both a product and a service. When sold as an on-premises product, the cost is $99/video port per month. The VidyoH2O gateway will most likely be deployed behind the firewall, as it will use the same firewall traversal capabilities Hangouts uses. When sold as a service, the price is $149/port per month, and the device hosting will be done by Vidyo.

Desktop or group video endpoints will connect to the Hangout as follows: Each Google+ Hangout has a unique identifier, which can be viewed by examining a Hangout link. Video units or phones will dial the URL or IP address associated with the VidyoH2O device, and once connected to it, they will enter the ID of the particular Hangout to which they wish to connect. Bandwidth between the VidyoH2O device and Google cloud is consumed only when one or more SIP or H.323 video device or phone is being used; otherwise, no bandwidth is consumed.

Future Implications
Google and Vidyo are still working together on WebRTC. The two companies are creating a scalable video coding (SVC) version of VP9, which Google will release with its Chrome browser as part of its WebRTC development. Hence, Vidyo's intellectual property will still be included within Google's Chrome browser to enable WebRTC. Since Google is making its codecs and WebRTC software available to WebRTC developers at large, we can safely expect to see VP9 SVC, and consequently Vidyo's technology, available in other WebRTC-compliant browsers as well.

The manner in which the VidyoH2O interoperability capability is going to market has some strong implications for WebRTC in the future. When Google releases VP9 into Chrome, it will have Vidyo's SVC capabilities built in. Point-to-point video calls with WebRTC/VP9 will work fine, but what happens when one needs multipoint calling?

The need/desire for multipoint WebRTC video will become a huge driver of Vidyo's infrastructure technology via a component called the VidyoRouter. The VidyoRouter is the "smarts" in a Vidyo-based video conferencing solution that intelligently routes video packets and enables multipoint video. The VidyoRouter is also the device that controls the video compression algorithm in the endpoint, causing it to take advantage of all of the benefits scalable video coding (SVC) has to offer.

It is speculation on my part, but the model we see for the VidyoH2O gateway is the same one that will be used for enabling multipoint video in WebRTC/VP9 SVC--meaning that Vidyo will offer a VP9 SVC-enabled version of its VidyoRouter to organizations who wish to take advantage of both WebRTC and multipoint video in the future.

Positioning itself with Google and WebRTC is a brilliant move for Vidyo and bodes well for the company's future.

Discover more about video at Enterprise Connect Orlando 2014, and learn more about WebRTC at the WebRTC conference-within-a-conference that Brent Kelly and Irwin Lazar are chairing.