It's Time to Take Another Look at Avaya

A recent analysis of Avaya looked at every element of its business, including go-to-market, financials, product innovation and roadmap, and compared it to the current market transitions.

I recently did a project with Avaya where I interviewed all their top executives and analyzed where the company stands today in relation to the markets that Avaya plays in. The result was a comprehensive report (available at the ZK Research home page).

The report goes into depth and includes some case studies and product detail, and I thought it was worth summarizing here. The analysis looked at every element of Avaya's business, including go-to-market, financials, product innovation and roadmap, and compared it to the current market transitions.

First, for a bit of background, part of my research methodology is to look for markets in transition. I'm a firm believer that significant market share shifts only happen when markets themselves shift. If there's no shift, there's no reason for customers to choose a new vendor. Once in a while the industry might see something like when HP jumped into switching and grabbed some share, but they did it by offering products at a dramatically lower cost. These situations, though, are rare.

I believe both the unified communications (UC) and networking industries to be in transition. Cloud delivery is gaining momentum and that creates opportunity. A recent ZK Research survey revealed that only 18% of companies prefer to use only public clouds. The others prefer private clouds (23%) or hybrid (59%), meaning 82% of businesses will be deploying their own private cloud. It's this shift that gives Avaya (and others) the opportunity to gain share. It's through this lens that I analyzed where Avaya is as a company.

Product Portfolio
Avaya is one of the few vendors that can offer customers a "full stack" across networking and communications. The industry is shifting away from the complex, proprietary solutions and more toward open, agile systems that are optimized for the cloud era. Years ago, Avaya made a commitment to open, standards-based solutions and has rebuilt its portfolio and integrated several acquisitions including Nortel and Radvision. Here's a summary of the products - if you want more detail, please read the report.

• Avaya IP Office is a fully integrated UC and contact center solution optimized for the small and mid-market. Key differentiator: The solution enables ease of deployment and ongoing management for the SME space.

• Avaya Aura is a full-featured, turnkey UC solution designed to enable businesses to build their own private clouds. Key differentiator: The turnkey solution leads to fast deployment time, and the open platform enables a broad ecosystem and best-in-class interoperability.

• Application middleware: Avaya's Collaboration Environment provides companies with the ability to develop communications-enabled business applications. Key differentiator: The solution is designed to be used with very little knowledge of telephony or CTI integration.

• Avaya Aura Collaboration Environment (a different product from the previous bulleted item) is a UC application development platform that enables customers and ISVs to build communications-enabled applications. Key differentiator: The platform uses modern programming languages so no CTI or telephony knowledge is required.

• Avaya Scopia Video Conferencing is a software-based video-conferencing solution designed to enable mobile and desktop video. Mobile video is red-hot right now, and based on a ZK Research Video Survey, it's also the type of video with the highest utilization rate. Key differentiator: The solution delivers best-in-class video over low-bandwidth connections.

Read on to page 2 for a closer look at Avaya's financial structure and risk.

Financial Structure
Avaya has re-engineered its financial structure to focus and simplify the company. It has invested in the right areas and is positioned to grow revenue and profits. (In its most recent quarterly report, issued last week, Avaya reported lower revenues but higher profit margins.)

Through the combination of its revamped product sets and the expansion of its total addressable market to include small and mid-market companies, Avaya has moved towards transforming into a more solidly performing software and services company. The following points offer proof of this.

• Software and services currently account for about two-thirds of Avaya's revenue, with approximately half of company revenue derived from services.
• Avaya has focused on improving cash generation. The company has restructured its debt maturities and has refinanced to access lower interest rates; reduced business restructuring expenses; and spent capital more efficiently. Its annual cash requirements have declined from $1 billion per year and are now expected to be below $925 million per year by 2015. Consequently, the company has the opportunity to increase cash balances or further reduce debt.
• Avaya has remained committed to innovation. Its R&D expense as a percentage of product revenue has been as high as 22% as the company overinvested to drive its product transitions. This exceeds the historical industry average of 15%, but has enabled Avaya to release many technology-leading products. Over the past four years, Avaya has invested in R&D at the following levels:

• The company has increased the rate of new product releases or upgrades to existing products. In FY 2012, Avaya released 51 new or upgraded products. In FY 2013, this number jumped to 101; and in the first half of FY 2014, the company released 51 new or upgraded products.
• Avaya has reduced expenses by consolidating facilities and reducing overhead, which has resulted in lower R&D costs. However, as evidenced by the new product statistics, Avaya has not reduced its R&D effort. In fact, streamlining R&D has actually accelerated product rollouts.

The below graphic shows a number of financial metrics that highlight financial improvements at Avaya since 2010. It's important to note that the Q4 FY 2013 adjusted EBITDA was $292 million on $1.170 billion in revenue, or 25%. This extrapolates to an annualized run rate of approximately $1.2 billion. 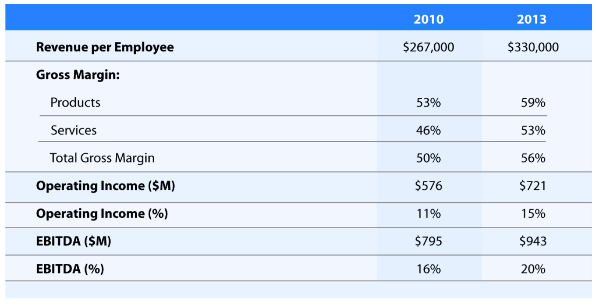 The Shift to a Services-Led Approach
Over the next several years, businesses will be shifting to the cloud. However, the path to the cloud can be complicated and daunting. Avaya Private Cloud Services (APCS) can be used as a stepping stone to a cloud solution, enabling organizations to get the benefits of the cloud without the associated risk.

APCS uses Avaya's partner organizations to offer operational support through a large team of experts, processes and tools. Avaya is positioning APCS as an extension of its customers' IT teams, not a replacement or an outsourced arrangement.

APCS is a cloud computing solution that includes a managed service wrapper. The solution includes expertise for every operational aspect of a business's communications infrastructure and network environments. APCS pricing is utility based regardless of whether the infrastructure is hosted with Avaya or, more likely, implemented on the customer premises. APCS offers fully managed or co-managed services to run the infrastructure, allowing its customers to focus on business priorities.

Avaya's APCS portfolio is composed of services that monitor, operate and optimize the infrastructure, while also notifying staff and resolving any incidents that could impact the operation of:

Risk to Avaya
While Avaya has rebuilt its product portfolio, restructured its financials and changed its go to market to be better aligned with market changes, there are still some risks involved. Obviously, if you don't have the right products, you won't succeed; on this point, Avaya's products compare favorably with its competitors'.

One of the risks for Avaya's growth opportunities is sales execution. The company needs to ensure it has sales people that are more service oriented and can talk the talk of business leaders. Avaya has an excellent sales leader now in Pierre-Paul Allard (formerly of Cisco), and this change is ongoing, but speed is certainly a necessity here for Avaya to realize this goal.

Another risk is just competing in a market with Cisco and Microsoft. These are much bigger vendors with huge marketing budgets and strong anchor products. To compete here, Avaya has to raise the bar on its ability to be nimble and beat the competition.

Despite the risks though, I do believe Avaya to be well positioned today. The interviews with the executive team revealed that all the executives are rowing in the same direction and understand the opportunities and challenges that lie ahead.

Leading UC industry analysts Dave Michels and Zeus Kerravala tackle the industry news that made an impact this week.

Across a wide spectrum of product areas, Cisco showed where we can expect the industry to head with a focus on innovation.

Open Collaboration: Innovating on a Bright Future for All

Universal security, directory, and baseline capabilities, plus limitless customization, will help bring everyone together and eliminate today’s challenges.

Help Build a Better No Jitter! Take Our Survey