Most enterprises are primarily concerned with the hardware and software costs of migrating to IPv6, but they should also plan on a higher bandwidth bill.

How well prepared are your vendors and service providers for the transition to IPv6? How well is the enterprise prepared? There are many values that IPv6 will bring to the Internet and private IPv6 networks. The roughly 40 Request for Comment (RFC) documents in existence that describe different aspects of IPv6 can be confusing, however, since not all of these RFCs will be implemented in the Internet. More are likely to be implemented on private IP networks.

IPv6 will have other implementation costs besides hardware and software. You will need anywhere from 10% to 46% more bandwidth to support VoIP calling, which will affect both SIP trunking and private VoIP networks. This highlights the importance of focusing on bandwidth requirements when planning a migration to IPv6.

Other migration issues include:

Expanded IP Header = Higher Overhead
The one benefit of IPv6 everyone seems to agree on is the vastly expanded IP address space. The address field is expanded from 32 to 128 bits--four times larger. Most experts predict that the address field will never have to be expanded again. However, this expansion will affect the bandwidth requirements for VoIP calls because VoIP packets are small, and expanded overhead adds to the packet size.

The IPv6 header is a minimum of 40 bytes, and it can be expanded beyond 40 bytes to support additional functions. These optional IPv6 header extensions include hop-by-hop options, destination options, routing, fragment headers, and more. However, they also add a requirement for increased bandwidth to carry the expanded IPv6 header.

More Bandwidth for VoIP
The additional IP header overhead impacts the VoIP call bandwidth requirements. There is no doubt that the enterprise will have to expand IP network bandwidth to compensate for the IPv6 header overhead. The chart below summarizes bandwidth expansion requirements when VoIP calls are carried over an IPv6 connection.

The chart compares the bandwidth requirements of IPv4 to IPv6, with the three most commonly implemented voice codecs presented. G.711, operating at 64 kbps, is the default for VoIP. G.722 also consumes 64 kbps but delivers HD voice. G.729, at 8 kbps, is the most popular compressed voice codec standard. Most VoIP implementations use a 20 ms voice sample to fill the packet. Although a larger voice sample packet of 30 to 40 ms uses less bandwidth, a smaller packet produces less delay. When a smaller packet is lost, it is easier to compensate for the lost packet. 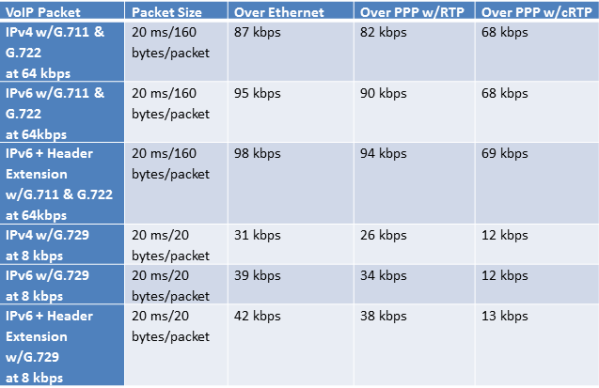 The effect of the IPv6 header on Ethernet connections therefore is higher bandwidth consumption. However, LAN bandwidth is so great that there really is no measurable impact. Likewise, when Compressed Real Time Protocol (cRTP) is applied, there is only a minor difference in bandwidth requirements.

Transitioning VoIP to IPv6
The migration to IPv6 may take 5 to 10 years because of the embedded base of existing technologies. It may be accelerated if the service providers actively promote its adoption. One Internet Service Provider (ISP) has set the date of 2020 as the cutoff of IPv4 access.

During the transition to IPv6, many enterprises will still be operating IPv4 networks. There will have to be some translation device between the private IPv4 network and IPv6 networks. If this translation device, for example a session border controller (SBC) for SIP trunking, is the responsibility of the enterprise and only IPv6 traffic will be accepted by the ISP, then the enterprise has to increase its bandwidth for VoIP calls. If the ISP performs the IPv4 to IPv6 translation, then the enterprise need not implement more bandwidth, since the VoIP traffic will be delivered to the provider's edge in IPv4 packets.

Enterprise Get Ready
Bandwidth has become cheaper over the years, but you still have to pay for it. The use of SIP trunks and connections to Multiprotocol Label Switching (MPLS) networks will be affected by the larger IPv6 header deployment. The enterprise does not have to do anything in the near term, but eventually more bandwidth will be required for IPv6 VoIP calls.

For small businesses, expanding bandwidth may produce a small cost increase. Call centers, on the other hand, will have to budget significantly more for the expanded bandwidth.