Interactive Whiteboards: Your Choice Written in the Stars

In the second of two posts, I cast your horoscope and guide you down the right path.

I ended my previous post on Cisco Spark Board, Google Jamboard, and Microsoft Surface Hub saying that when it comes to these devices you have no choice. Two of them are completely unsuitable, while one is absolutely perfect. And this is where I tell you which is which.

This week I'll cast your horoscope to prove that your choice was predetermined. You just need to consult the zodiac.

This might seem counterintuitive to your rational mind. After all, why shouldn't the choice simply boil down to price? One lists for nearly twice as much as the other two. Why pay $9,000 for a Surface Hub when Jamboard and Spark Board cost a mere $5,000?

But when pricing these puppies, Cisco and Google decided to throw a curve ball. Both require customers to pay for a monthly subscription. So here's a chart showing how much you will have spent on a 55-inch device not only when you first buy it but also after one, two, three, and five years: 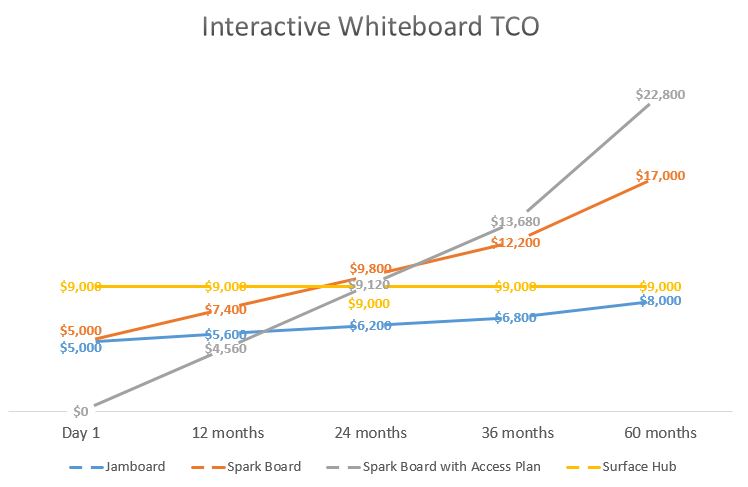 As you can see, Jamboard clearly will cost least over the life of the whiteboard. So Google must be the right choice.

But that's just not the case. Price simply won't be a deciding factor in which of these whiteboards you're going to buy. Nor will features. Or processor power. Or which has photos of the prettiest models on its marketing brochures. Your choice, as I said earlier, has been predetermined. It was written in the stars, so your choice will be guided by the sign under which you were born. But, fear not! I will cast your horoscope and guide you down the right path:

You Were Born Under the Constellation of Google

You are one with the Web and the Web is one with you. You see the world in bright primary colors -- blue, red, yellow, blue again, green- ... in that order, from left to right. Outlook is out, and good riddance. Gmail is in, bringing the entire G Suite along with it. End users are storing Docs, Sheets, and Slides files in Drive. Some are even getting the hang of Hangouts. There are surprisingly more Android phone and tablets than you remember having not that long ago. And Chromebooks are starting to populate places where MacBooks once roamed free.

Jamboard will fit right in to all of this. It assumes that companies buying it have also bought into Google's vision of the workplace. In fact, Jamboard is pretty useless without serious investments in Google's various services and business apps. Who cares if Spark Board connects to laptops and mobiles without a mirroring dongle? You've got Chromecast doohickeys all over the place. Just slap one into Jamboard's HDMI port and everything's good to go.

You Were Born Under the Constellation of Cisco

This is the dawning of the age of the network. In fact, it dawned years ago and you were there to see it. Now Spark has its turn to shine. You've worked out how the messaging and conferencing app is and isn't similar to all those Jabber and WebEx clients you've deployed. You understand how it integrates with CallManager, which -- because you've been a Cisco shop for so long -- you're still calling CallManager, despite Cisco retiring that brand something like 10 years ago. You've got a bunch of Spark Message and Meeting accounts that IT has played around with before trying to convince people to use Spark instead of Slack. You might even have put some semi-serious thought into the Spark Call plans, working out when and if that might be the best way to finally retire that tired old PBX.

When it comes to interactive whiteboards, Spark Board is the perfect fit. It works seamlessly with all those Spark apps installed on users' laptops and tablets, desktops, and smartphones. (Actually, it's utterly dependent on them. You have no reason to buy Spark Boards if you're not also using Spark.) It leverages endpoints and systems and services with which your Cisco-trained IT department is intimately familiar. So what if it's going to cost more in the long run? This is Cisco technology we're talking about! The best always costs a pretty penny.

You Were Born Under the Constellation of Microsoft

You're not sure if the universe has a bright center that everything else revolves around, but if it does it's in Redmond. You can talk a good game about "mobile first," but deep down you know it's still all about the desktop. Transitioning to Windows 10 may have been a trial by fire, but it tempered your steel and you emerged stronger, tougher. Office 365 is either in place or on the immediate roadmap. You've probably enabled Skype for Business's instant messaging and peer-to-peer voice and video calling features, but not yet committed to Enterprise Voice as an alternative to your regular PBX or telephony service.

For you, there's no mystery about how Surface Hub fits in to the grand scheme of things. It's just a Windows 10 PC (and you can never have too many of those) embedded into a ginormous display. It runs Windows 10 apps that employees are already familiar with because they've got them on their PCs too. It's integrated with Office 365, and serves as a fantastic Skype for Business video conferencing endpoint. It might not be as intuitive to use than some of the newer whiteboards being released. But what of it? They're barely a step up the evolutionary ladder from dry-erase markers anyway. Surface Hub can do so much more.

Not Just a Whiteboard, But an Ecosystem

All this is to say that when it comes to Jamboard, Spark Board, and Surface Hub, you're not just buying a device, you're buying into an ecosystem. Chances are you've already bought into it. So it doesn't really matter if this one is cheaper, that one has snazzier features, or another comes with a polka dot and leopard skin casing. There's only one device that's going to work for you, and that will be pre-determined by whether you're a Google, Cisco, or Microsoft shop. If you've bought into any one of their ecosystems, then only one of the whiteboards is going to fit into it well. And if you haven't bought into the ecosystem, it's not going to work well... or at all.

This is why I say you have no choice which whiteboard you're going to buy. Your choice was fixed in the stars before jam, spark, and hub ever became part of your vocabulary.

As your astrologer du jour I should point out that just as more than three constellations constitute the zodiac, considerably more than three vendors make up the market for interactive whiteboards. I've dedicated this and the last couple blogs to Cisco, Google, and Microsoft because these are the vendors with a larger enterprise collaboration solutions set that ties directly into their new whiteboards. But there are loads of others, many of which I recently profiled.

Developed by Dell, Display Ten, inFocus, NEC, and others, these devices are unencumbered by a larger ecosystem. The companies developing them aren't trying to rope you into a larger portfolio of cloud platforms and SaaS applications and whatnot. They just want to sell you a whiteboard. So there's your chance to take control of your own destiny, to regain the ability to choose which path you'll walk.