Each of the three market leaders--Cisco Systems, Avaya, and Nortel--reported increases of at least 10%.
Allan Sulkin

The numbers have not been finalized, but based on the raw reporting data from the leading IP telephony system suppliers, shipments were up about 10% for Q2 2009 in North America compared to the first quarter. After two consecutive double digit sequential quarterly declines, shipments did a 180-degree turnaround last quarter. Product revenues also increased, negating possible claims that huge discounts accounted for the positive shipment data. Both Cisco Systems and Nortel quarterly shipments declined more than 30% during the first quarter, and Avaya's declined almost 18%. The fact that Nortel reported an increase is the most surprising result, because during the first half of the year its Enterprise Solutions (ES) business unit was thought to be on the sales block coincident with Nortel's corporate bankruptcy proceedings: Avaya was announced as the selected "stalking horse" bidder last month.

On a less happy note, second quarter shipments, despite the growth spurt, were still down about 10% from Q2 2008 results. Even Cisco, the only leading supplier who defied the market trend with higher shipments results during Q1 2009 compared to Q1 2008, had lesser shipments. A positive sign is that the decline is slowing, because total North American market shipments for the first quarter declined more than 20% on a year by year basis. With another half year of shipment data still to come it is still likely that annual shipments this year will decline by at least double digits unless the second half results are very strong. My current forecast estimate for the year's shipment decline is currently 12%, a far better outcome than my earlier forecast of possibly 30%. Fourth quarter results have a good chance to show positive year over year quarterly growth, because shipments began nosediving during the last quarter of 2008. 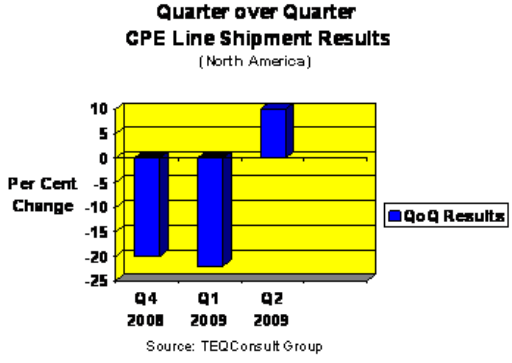 I hope to finalize my first half 2009 market share estimates sometime during the next week as I await data from only one more of the leading suppliers. I can currently state without reservations, however, that Cisco is still the market leader with Avaya a strong runner-up and Nortel rounding out the top three. The battle for fourth place is still to be decided between Mitel and NEC Unified until the latter forwards its shipment report. The top five suppliers are in control of more than 60% of the total market (SMB and Enterprise systems, collectively). Based on all available data it appears that open source solutions have been making inroads and hosted solutions for SMB customers are inhibiting total CPE system market growth. Stay tuned next week.