Last week, Vidyo made a small 335-word announcement with huge implications for itself and WebRTC. The news was that Google and Vidyo will make SVC part of Google's VP9 codec and WebRTC.

This is really about Skype.

Before I clarify that conclusion, let me clarify the announcement. Google is a proponent of the VP9 Codec that it open-sourced for WebRTC. Google and many others believe that an open-source, free codec will allow video applications and usage to proliferate. Today's more popular codec, H.264, requires licensing, a condition which is common but favors the status quo--innovation typically isn't fostered by patent attorneys.

I've written before that VP9 will be the next big codec (H.265 Will Never Happen). Nokia's legal claims and refusal to license, likely at the behest of Microsoft, remains one of the few remaining legal barriers. (With the Microsoft-Nokia combination, Nokia retained the patents and is no longer beholden to Microsoft). However, there are two benefits associated with both H.264 and H.265: hardware acceleration and scalable video coding (SVC).

It is common to find cameras and other hardware devices with included H.264 capabilities. This is not the case for VP8/VP9, but there's no technical barrier preventing it. Hardware vendors are reacting to the lack of demand stemming from intellectual property concerns, but once legal concerns are cleared, then VP8/VP9 will take off and the hardware makers will embrace VP8/VP9.

SVC is a far more complex issue to solve, as it involves both legal and technical issues. SVC enables the codec to send information in layers. A full/high quality video stream uses all the layers, and combinations of layer subsets create video of varying degrees of quality. This enables remote participants to enjoy the same conference when some are on a high-end video room system and others are using a wireless mobile client.

SVC is not a simple standard; there are varying degrees and approaches--there's no interoperable SVC between vendors (because of signaling and transport variables). Many vendors are implementing SVC techniques, but require conversion back to the basic-layer AVC for multi-vendor interoperability. SVC layers involve the frame rate, resolution, and more--resulting in numerous knobs to tweak. Vidyo has built its business on SVC, and although it actively participates on standards and industry boards, it also holds several patents to the technology.

Google had a problem. The company champions WebRTC, VP8/VP9, and SVC--the first two go together, the third is more associated with the H.264 codec (but doesn't have to be). Why is SVC important to Google? The obvious answer is its versatility in different network conditions--but the more direct answer has to do with Hangouts.

It is SVC that allows Google to deliver high-quality, free-multi-party video conferencing within Hangouts. Google uses Vidyo (and the H.264 codec) to do it. Typically, Hangouts show the speaking party in high resolution, with participants shown in lower-resolution (single layer) video. The user can select any participant to be the larger picture, which dynamically changes the number of layers associated with that picture. The endpoint is actually receiving each picture independently and signaling for the appropriate quality, as opposed to an MCU reformatting all the feeds into a single stream.

Google+ is now about two years old. It continues to grow, but it won't unseat Facebook. However, Hangouts does pose an interesting challenge to Skype. Google is working to defuse Skype with both WebRTC (see: Is WebRTC a Threat to Skype) and Hangouts. Hangouts was initially only a video tool, but updates include PSTN audio (via Google Voice) and more recently IM/presence. Hangouts is becoming more Skype-like, but unlike Skype it offers free-multi-party video conferencing. 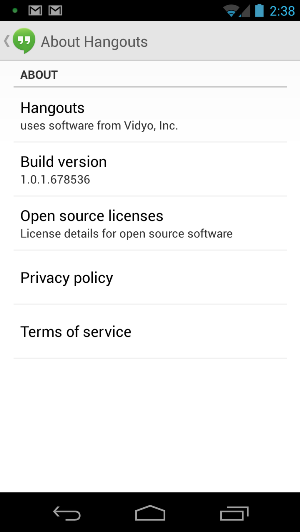 When Google announced its newer version of Hangouts last Spring, it was speculated that the company was intending to move away from Vidyo, but that wasn't the case. As shown, the new Hangouts still uses Vidyo technology. Google's target is Skype, and needs to demonstrate that VPx is equal to or better than H.264. To do this, Google needs SVC support for VPx. That meant it either had to build SVC support itself, acquire a firm like Vidyo, or make a deal with a firm like Vidyo. It chose the last option.

Vidyo committed to extending SVC to VP9 and will make these extensions a part of the open-source WebRTC client. Google committed to deploy this new WebRTC extension within the Chrome browser. This does not make SVC a required part of WebRTC, yet it does make every Chrome user a high-quality endpoint for Vidyo--sans plugin. With no plugin and free multi-party video, Google Hangouts will have a compelling benefit over Skype.

Both Google and Vidyo win: This will drive more membership to Google+ and legitimize VP9. Vidyo gets a world of endpoints ready for its infrastructure which can be leveraged in other applications via its VidyoWorks SDK. WebRTC gets a consistent implementation of SVC. The part you really have to respect is that it didn't really change anyone's strategy. Google will continue to leverage Hangouts as a draw to its services. Vidyo was always focused more on the infrastructure than the client (see: DIY Room Systems). WebRTC will continue unchanged for many, but the SVC extensions will become available for those that wish to leverage it.