The developer says that it will focus on platform design, software and cloud applications.
Allan Sulkin

Cloud Telecomputers, a San Francisco-based software developer, has come out with a new platform called Glass for creating Android-based media phones for business. The company is attempting to market Glass--which includes next-generation hardware, software and cloud-based applications--to telephone instrument, PBX manufacturers and telecom service providers for either licensing or private label arrangements. The developer says that it will focus on platform design, software and cloud applications, while its license partners should concentrate on branding, channel development, customer acquisition and operational scale.The SIP-based product includes: an 8" high-resolution color touch screen display with integrated handset; HD audio; Bluetooth integration to pair with cell phones; and the Android development environment. There are a variety of embedded applications: instant screen sharing; visual voicemail; voice to text; voice notes; and Salesforce.com integration. The following hardware design platform diagram from the company website sums it up pretty well: 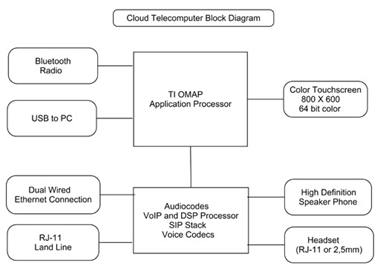 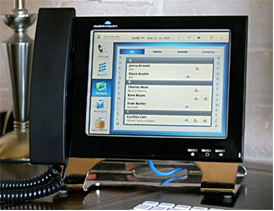 Cloud Telecomputers is funded by several industry notables, two of whom I am familiar with: Ken Oshman, a founder of Rolm Corp. (which since passed between IBM, Siemens, and mostly Gore Group) and Bob Hawk, ex-group president of Qwest. Many industry old-timers are familiar with the former individual, but not the latter. I am well acquainted with Bob from our days together at AT&T. Bob was the AT&T Director with primary responsibility for developing and bringing to market the Bell System's first digital PBX, System 85 (code named Antelope). I worked with Bob and his group for several years, mostly providing competitive analysis support.

Shortly after I left the company Bob also left to work with a start-up named CXC, developer of the Rose PBX system. It was a time when the hot topic of conversation in the telephony market was the integration of PBXs and LANs, years before IP telephony started. The CXC Rose system integrated a digital PBX with a local area network and provided voice store-and-forward operation as well as text messaging and mail (sound familiar in the context of today's UC offerings?). Needless to say the Rose rather quickly wilted, as did other integrated PBX/LAN offerings, such as the Ztel PNX. Bob did not last long at the company, departing the company to head back to an executive position at his old Mountain Bell stomping grounds (which was by-then incorporated as part of US West, later acquired by Qwest Communications). It is both interesting and amusing to see industry names popping up in the enterprise communications market more than a quarter century after they made their mark.

It is also interesting that the new Glass product is being funded, developed and marketed when there is a major discussion about the future of desktop telephone instruments. Glass is not obviously designed for all telephony system station users, although Ed Zander, former CEO of Motorola and another investor, is quoted on the website home page saying, "In 3 to 5 years, all business phones will look like Glass." Anyone wanna bet?

The first all-touch screen business telephone was introduced by Nortel almost a quarter century ago, the digital Meridian 3000, but it was years ahead of its time and doomed to failure from the start. Station users found it difficult to interface with and operate the instrument. It was a product concept years ahead of its time. Many of today's IP instruments are designed with a touch screen display, but all retain a dial keypad and other familiar feature/function buttons. It is often difficult getting the mass market to adapt to a different product look and feel in a short time period. Products like iPhone are rare, and one must take into account its success has been greatly supported by a young consumer market segment that grew up in the computer age playing video games, not like old fogies like myself (not to imply I am that old or too much of a fogy).

There may be a niche market for an offering like Glass, but with the desktop telephone instrument market possibly declining it will be difficult to make much of an impact. The most likely touch screen device on a worker's desktop will be the PC display, and it may also function as the soft phone alternative to the traditional telephone instrument. Information displays in the future will also be integrated into the work area environment (table, wall) supported by virtual keyboards for text typing requirements. Dedicated desktop telephones will have their place, but less so among white collar professional workers than lesser-compensated administrative support staff. Desktop instruments are also likely to remain in place across several vertical market sectors, such as hospitality, e.g. hotel rooms, and health care, e.g. hospital patient rooms. As I wrote before, analog telephones are virtually indestructible and many CFOs find them difficult to throw away and replace.

Good luck to Cloud Telecomputers, because I am sure the company executives and investors are hoping that Glass doesn't shatter into a million pieces. It's tough out there for new products from start up companies, and even tougher for makers of desktop phones when mobile handheld devices are likely to be the preferred interface to the communications network, both premises and carrier, in the future.