Mitel creates IoT reference architecture aimed at enabling connectivity between IoT devices and communications endpoints without a rip and replace.

Now that June is here, let the summer fun begin! Barbecues, picnics, weekend getaways, other travel adventures -- oh, but wait... you've probably got a weighty project or two clouding up what would otherwise be carefree frivolity. Who among us doesn't know how quickly the workweek can blur into the weekend when a high-stakes initiative is underway?

If digital transformation is what's weighing on your mind, Mitel has a message for you: Relax, take a breath. This stuff doesn't have to be as hard as you think.

If the company has learned anything in its short-lived mobility gambit (acquiring Mavenir Systems in March 2015 but then selling off its mobile business division in December 2016), it's the importance of enabling the intersection between mobile technologies -- read "Internet of Things," or "IoT" -- and communications. This traditional business telephony systems provider centers its efforts to do so around two industry statistics: an estimated 20 billion IoT devices and 450 million voice office endpoints in use today, Mitel CMO Wes Durow told me in a recent briefing. Pushed by enterprises of all sorts, Mitel has focused on finding a way to let companies connect these two worlds without having to tear everything up and start from scratch.

What Mitel has come up with is an IoT reference architecture that "gives machines a voice" by using existing UC and collaboration infrastructure, tied into the cloud, as the "call routing engine" for IoT, Durow said.

He described a couple of examples to me, one being how K-12 school district administrators could use an Internet-connected personal digital assistant -- in this case, Amazon's Alexa -- as part of an alert notification workflow. With a storm brewing, they might ask, "Hey Alexa, what's the weather?" Should "flash flood" be part of the response, Alexa would launch a conference call and initiate a code yellow alert, which in turn would trigger outreach to the bus company for revised pickup schedule.

No matter the use case, the key is starting with what you've got. "The biggest challenge many companies have when they think about digital transformation is that it seems like a moon shot -- it's too much. They don't know where to start," Durow relayed. "Our simple message is that they can leverage what they have and move at their own pace -- they should figure out gaps in their organizations that can be improved by connecting a machine to a human."

Mitel's IoT reference architecture breaks down along three dimensions: detect, analyze, and communicate. The intent is to give enterprises a "pragmatic, practical roadmap" for how to connect whatever IoT middleware they're using, via APIs, to Mitel's UC platforms for applying routing rules to sensor data and initiating communications workflows. CloudLink, which Mitel describes as an enablement technology for connecting its own or other vendors' installed, premises-based UC platforms to the cloud, is a critical component in Mitel's scheme of tying together IoT and UC worlds, Durow said. Going back to that K-12 example, such connectivity would enable the school district to publish a flash flood early dismissal notice via Twitter and send an SMS notifying parents that their children would be released from school ahead of flash flood conditions. 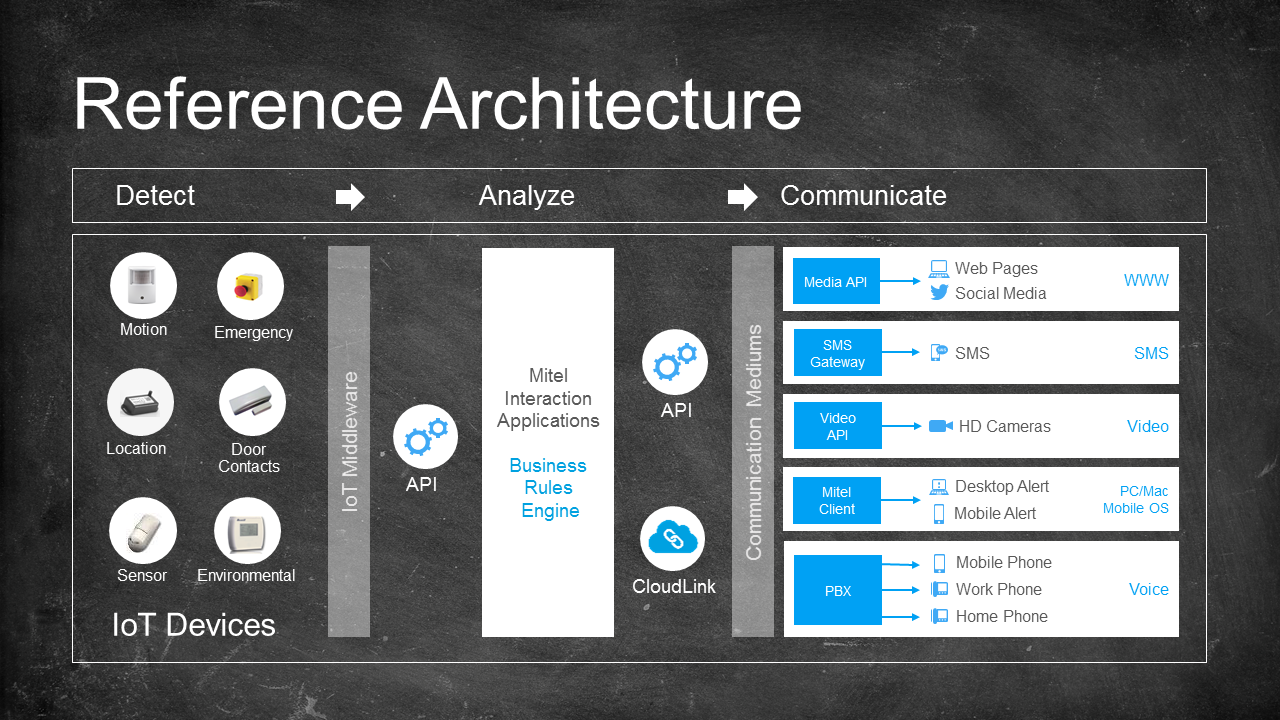 Mitel certainly isn't the only communications vendor looking to capitalize on the link between IoT and UC. But Durow said its differentiator from others -- including Cisco, Microsoft, and Twilio -- is in its efforts to snap into existing SaaS application environments without forcing a rip-and-replace and complete rewiring.

Innovation, driven by customers, is rampant -- the opportunity too big to measure, he said, noting: "The innovation is not about the product -- the innovation is really about how the technology is used and less about the technology. The 'pirate code' is not going to change -- whatever is easy to use, simple to manage, and portable to deploy will win in this scenario."

Customers have pushed Mitel to think about digital transformation in a new way. And in so doing, "it forces us to say, 'OK, we've got to be Switzerland... we've got to connect to any device, any platform, and any application environment to make it work and drive a certain business outcome," Durow said.

Enterprise IT professionals who have traditionally dealt with telephony should be sitting up and taking notice.

Durow compared the transition from TDM to IP telephony -- "interesting, but kind of like moving from regular to unleaded gas" -- to where we are today with the convergence of IoT, the cloud, and UC. "This phase we're heading into is really more exciting because folks who understand telephony understand how companies are wired better than any software folks and even any data networking folks. They understand the gaps in organizations and where people do and don't communicate -- and when they don't, how improving that workflow with a machine-to-human interaction can close the gap and improve competitiveness."