Merged company aims to take team collaboration to the next level.

Fuze earned recognition earlier this year as one of seven collaboration-focused companies selected to participate in the 2015 Enterprise Connect Innovation Showcase. Fuze got the nod for its unified cloud platform, which consolidates real-time audio, video, and Web conferencing.

With the LiveMinutes acquisition, Fuze aims to make team collaboration more effective. If that sounds familiar, it should -- easing and improving team collaboration is the stated purpose of quite a number of start-ups and legacy UC vendors alike, as No Jitter has regularly reported (for example, see The Email Killers: 10 Cloud-Based Team Collaboration Tools).

For its part, Fuze is focusing on creating a great meeting experience, said Kemal El Moujahid, who had been CEO at LiveMinutes and is now leading product strategy for Fuze. With the addition of LiveMinutes, distributed teams not only have a platform for real-time conferencing, but also one place for content sharing. And, because these project workspaces are persistent, context surrounds all of the content -- no matter the media.

"We're looking at ways for teams to better prepare for and run meetings, and to improve follow-up based on notes taken and asynchronous communications," El Moujahid said. 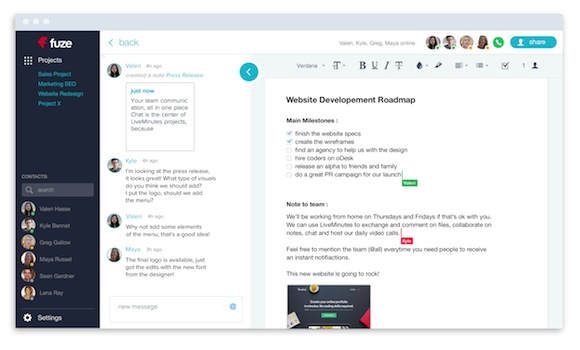 Ultimately, the acquisition will enable acceleration of the merged company's collaboration development efforts, he added. Between the LiveMinutes workspace and Fuze's highly scalable, HD-quality voice and video conferencing platform, the merged company has the "building blocks of the ultimate connected workspace."

Getting attention among a crowded field will be challenging, but teams at more than 100,000 companies are already using Fuze. These include at notable companies such as Groupon, Macy's.com, and Starbucks.

Fuze has a lot of work to do on the integration of the two products, but said it first intends to add Collaborative Notes with the Fuze platform in June with a goal of delivering the fully integrated product experience for general availability later this year. Early users are already providing feedback on the first iteration, El Moujahid said.

In addition to the LiveMinutes acquisition, Fuze also announced that is has received $20 million in new funding from Hermes Growth Partners. The funding and acquisition follow on what Fuze said has been a "banner year," with 100% growth in the number of companies using Fuze.