IoT, UC, cloud computing, telepresence, and AR/VR are among key apps that could benefit from extended wireless connectivity. 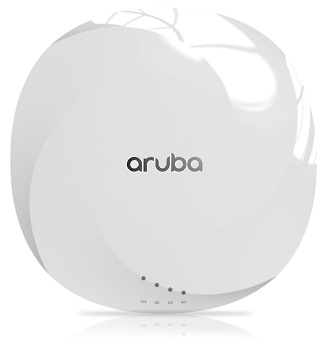 The industry’s first enterprise-grade Wi-Fi 6E access point (AP) — from the newly introduced 630 Series from Aruba, a Hewlett Packard Enterprise company — just made its debut, extending wireless connectivity to the six-gigahertz (GHz) band.
The 630 Series triband campus APs are designed for Wi-Fi 6E devices that operate in the 6-GHz band, opened in April 2020 by the Federal Communications Commission for unlicensed use in the U.S.
For more than two decades, unlicensed spectrum for Wi-Fi connectivity has only been available in the 2.4-GHz and 5-GHz bands. But skyrocketing connectivity demands have put a strain on existing Wi-Fi networks. The opening of the 6-GHz band for Wi-Fi 6E created an opportunity for innovation around new devices, demand for which is expected to grow tremendously over the next couple of years.
Wi-Fi 6E extends the efficiency features and capabilities of Wi-Fi 6 into the 6-GHz band, providing up to seven 160-megahertz (MHz) channels for high-bandwidth applications that require lower latency and faster data rates. Some of the key apps that will benefit include Internet of Things (IoT), unified communications, cloud computing, telepresence, augmented reality, and virtual reality.
IoT, in particular, is on the verge of another growth wave, since it’s a key component of the safe workplace. As people return to the office, businesses will implement IoT endpoints such as temperature scanners, IP cameras, environmental sensors, and even cleaning robots. These are mission-critical devices in that they can ensure the workplace is safe for all. In fact, ZK Research predicts the number of connected devices will reach 80 billion by 2025, up from the 40 billion today. Many of these will need the higher quality and faster connectivity achieved with Wi-Fi 6E.
Aruba’s 630 Series AP offers several advantages, most notably comprehensive triband coverage using three dedicated radios. It supports the 2.4-GHz, 5-GHz, and 6-GHz bands with a max speed of 3.9 Gbps. Aruba designed the AP with a mix of radios for backwards compatibility, a necessity for organizations looking to refresh their Wi-Fi networks. Without the three radios, businesses would need to “salt and pepper” 6 and 6E APs where both are deployed and managed independently.
“With three distinct bands you can really start thinking about segmenting certain apps and devices or using it for wireless backhaul in remote locations where six gigahertz might be the only option because you can’t have wires,” Steve Brar, Aruba’s senior director of product marketing, told ZK Research in an interview.
Another unique feature of the AP is ultra-triband filtering to minimize interference between the 5-GHz and 6-GHz bands, giving organizations maximum use of the new spectrum. Gaps in the spectrum can cause interference and performance problems for devices. Aruba’s technology dynamically applies filters and allows organizations to fully utilize bandwidth with optimal performance while simultaneously using 5-GHz and 6-GHz bands.
Furthermore, the AP provides high-performance wired connectivity across all three radios. For connection to a wired network, it features dual 2.5-Gbps Ethernet ports. That means organizations get a combined 5 Gbps of throughput on the wired side — enough to keep the network up and running even if one of those connections goes down.
The 630 Series is a new addition to Aruba’s Edge Services Platform for automating and securing wired and wireless environments. It’s manageable via the cloud and can support anything from distributed enterprise branch offices to large-scale remote deployments in both controller and controllerless mode.
Availability is expected in August. While Aruba is finalizing the price, Brar confirmed the AP will cost approximately 25% to 30% more than dual-radio. This would be a reasonable price increase for tri-band coverage.
Aruba anticipates organizations will take advantage of the Wi-Fi 6E capabilities in the 6-GHz band that had been underutilized in the 5-GHz band, Brar said. Aruba’s research found 91% of its customers are only using 20-MHz or 40-MHz channels, even though Wi-Fi 6 can easily support 80-MHz channels in the 5-GHz band. With Wi-Fi 6E, organizations can use 80-MHz channels in an enterprise environment, effectively doubling device throughput.
“Wi-Fi 6E is like a high-speed freeway that is not burdened by legacy technologies,” Brar said. “It’s going to provide a lot of future-proofing and capacity for IoT and other types of devices.”
One question that has come up from users is where to deploy 5G, Wi-Fi 6, and Wi-Fi 6E, and some of this depends on the device itself. If an endpoint only has a 5-GHz radio in it, then it will connect over Wi-Fi 6. If there’s a choice though, my recommendation is to use Wi-Fi 6 for general-purpose connectivity since it offers the best price for performance. When guaranteed performance is an absolute must-have, then 5G it is. This would include for use cases involving medical devices, factory robots, and autonomous vehicles, as examples. Wi-Fi 6E is an excellent choice for endpoints such as video endpoints, surveillance cameras, and some IoT devices that require higher bandwidth and cleaner spectrum.
Note that this isn’t an either/or scenario where businesses have to choose between the standards. It’s about knowing how to deploy all three while optimizing performance and cost.