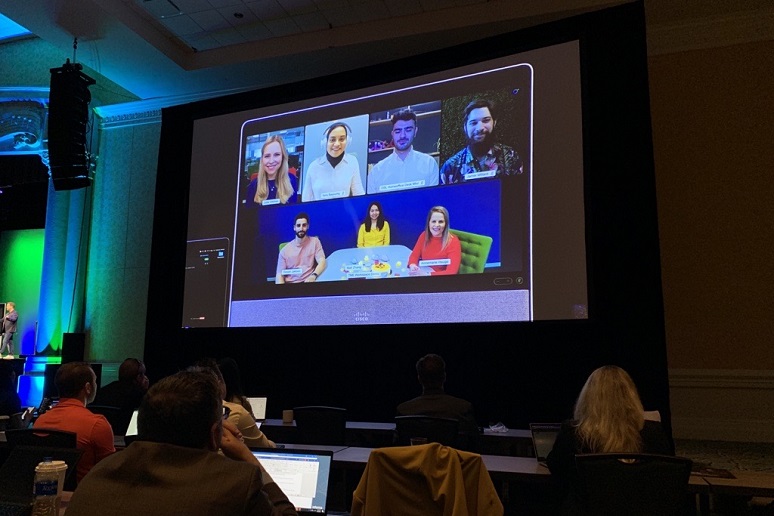 Image: Lisa Schmeiser
Enterprise Connect is back! One of the highlights I always look forward to are the keynotes, particularly Cisco’s as the speakers generally —but not always — deliver a good mix of vision and product. This year, Collaboration and Contact Center General Manager, Javed Khan, took the stage with appearances by SVP and GM Snorre Kjesbu and VP and GM of Cisco Calling, Lorrissa Horton, to discuss the upcoming wave of hybrid work, the problems companies might face, and how Webex has been evolved to meet those challenges.
Hybrid work is a fascinating topic as businesses have never faced a scenario like this before. Companies have to plan for scenarios where everyone is in the office, no one is in the office and every combination in between. It’s a confusing time, and many organizations I have interviewed are currently in the process of figuring out exactly what the next wave of work looks like and are struggling with implementing a plan. In fact, I have gone on record stating the first wave of hybrid work will be a disaster as it’s significantly more complicated than work from home. However, businesses are moving forward with it as my research shows that 51% of employees will continue to work from home two or three days a week, and 24% of employees will work at home one day a week, meaning a total of 75% of the workforce will be hybrid.
During his keynote, Khan did an excellent job setting the stage, talking about how work has changed in the hybrid era, and highlighting many of the challenges that businesses will likely face. Last week, Cisco pre-briefed the analyst community and was able to go into more detail given he did not have the time constraints of a 30-minute keynote, so I included those comments into this post as well.
The first big change that Khan noted is that the office moves from a place to work to a place to meet. I’ve described the future of knowledge work as being similar to the college experience: you attended focused lectures, labs and classroom discussions, then met with classmates separately and did a lot of solo work in other spaces. There are obviously empty spots between meetings and classes where one would go find a quiet place to work. This could be the library, cafeteria or another location often called the “third place.”
And now, some people will continue to do much of their work at home. When they do go to the office, those days will likely be filled with interpersonal work like meetings and collaboration sessions. If the employee has a break, they’ll find a desk or go to the cafeteria.
Another major shift hybrid work will engender is outfitting employee’s homes with the right tech. Prior to and even during the pandemic, people just cobbled assorted hardware set-ups and spaces for work. The dining room table became the office, the personal phone became the business phone, etc. Looking ahead, companies need to ensure workers are set up with the right technology at home to ensure their productivity is consistent and location independent.
The next issue is something that has been and continues to be a struggle for businesses: Democratizing the meeting experience to make it inclusive for all. For years, solutions were deployed to connect remote employees with office-based colleagues in a conference room. This meeting produced two significantly different experiences for two groups of employees in one meeting. The challenge is creating a meeting experience that works for both remote and on-site workers, where everyone can collaborate equally. This overlaps somewhat with the fourth challenge Khan outlined -- and that’s we should no longer tolerate bad meetings. Bad meetings and events today can be catastrophic in an era of hybrid work. Businesses are doing things virtually today that would have only been done in person two years ago. For example, companies are going through an entire M&A process without meeting in person, and a failed meeting could mean losing out on a deal. Also, company leaders are discussing quarterly earnings over tools like Webex. A bad experience could put reporting numbers on time at risk.
The last item Khan talked about was particularly timely — employee retention. The era of “shut up and do your job” is over. Workers have a plethora of choices and are no longer hesitate to leave jobs they do not like. We are in the midst of the Great Resignation, which creates a great opportunity to hire people with higher skill levels but attracting people today takes more than a big paycheck. People want to work at a place where they can make a difference and can excel at their job, and that work requires best-in-class collaboration tools. Businesses need to understand that the choice of collaboration platform they make today will have an impact on employee retention.
Cisco has spent the better part of the past two years retooling Webex for this moment – the moment when workers head back to the office and the hybrid era truly begins. On stage, Khan mentioned over 1,200 new features have been added since the pandemic began, which shows the pace of innovation Cisco has been working at Kjesbu, and Horton came on stage to demonstrate many of the functions and features available now and coming. There were too many for an exhaustive list, but there are a few I’d like that call out.
The Cisco keynote has been a fixture at Enterprise Connect for two decades now. This was the first for both Javed Khan, and I thought he did a nice job of highlighting the challenges hybrid work brings and then providing solutions to those problems. Hybrid work is coming and coming fast. If companies get this wrong, it will mean un-productive workers and employee churn. The choice of collaboration platform (not product) matters and needs to democratize experiences everywhere.
Editor’s note: This article has been updated since it was first published.