How Much Does Experience Equality Matter?

To improve the employee experience in 2022, enterprises will need to avoid uneven video meeting experiences between in-office and at-home employees. 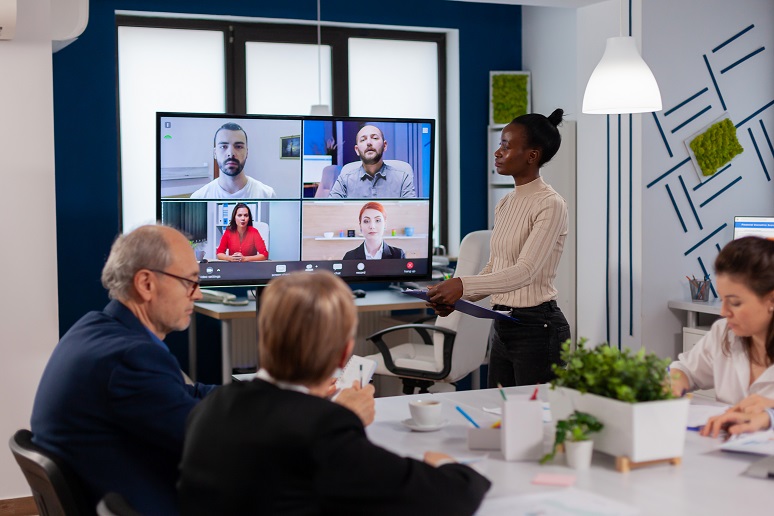 Image: DC Studio_stock.adobe.com
Just about a year ago in this space, I wondered whether 2021 would be the year of the employee experience. My answer to that question is mixed: It was certainly the year of talking a lot about employee experience, but it definitely wasn’t the year of solving employee experience.
Some of that has to do with the halting progress of the return-to-office. Strange as it may sound to some folks, it wasn’t until earlier this month that I was on my first videoconference where some of the participants were together in a conference room instead of everyone connecting in from their desktop. And that whole experience equality thing they’ve been talking about? It’s real — real, bad.
I was struck by how poor the experience of interacting with the people in the remote conference room was. In a roomful of people I know personally, I couldn’t have identified any of them from their tiny, distant faces. Of course, half the people in the room weren’t even in the frame. It was essentially an audio conference with a picture that you were better off just ignoring.
What’s changed in two years is that we used to accept this reality of room video, and now we don’t. Our baseline expectation for a videoconference is that we can see people’s faces well enough to feel like we’re having some real engagement with each individual.
None of this is news to a lot of people, but the question now becomes: How big a problem is this lack of meeting experience equality?
Because ultimately, in that first call I was on and another I’ve had since we got our business done even with a suboptimal experience of interacting with meeting room-based participants. Maybe because these were people I already knew, I could mentally fill in the picture of what they looked like as they were speaking. And in any case, I don’t see my colleagues’ faces on a lot of desktop-based videoconferences anymore: Half the time, at least on internal calls, everyone’s turned their video off anyway.
So, when we consider employee experience in 2022, we’ll have to think about when and why it’s important for people to appear on video in a way that allows for real face-to-face engagement. The conventional wisdom is that people in meeting rooms are disadvantaged by legacy systems that present the standard bad view. But these meetings won’t be happening in a vacuum. Which employees will be in those meeting rooms in the first place? Will we be living in a world where the higher-ups (and those who want to be) are coming into the office in hopes of coaxing a return-to-workplace that most employees seem clearly reluctant to embrace? If so, the company dynamic may outweigh the immediate experience of the meeting.
Those are some of the considerations we’ll address at Enterprise Connect Orlando 2022. We have a session on Video Meeting Equality: Why It Matters and How to Achieve It, led by Ira Weinstein of Recon Research. As the title suggests, this session will make the case for why enterprises need to strive for this equality. The rest of our Video Collaboration/AV track will tackle related topics.
I hope you can join us in Orlando from March 21 – 24 for Enterprise Connect 2022. Our program is online now, and it covers everything from video to contact centers to CPaaS and much more. In the meantime, I hope you have a wonderful holiday season, and you get to be up close and in person with the people who mean the most to you as we head into an unpredictable 2022.

What Does ‘Back to the Office’ Mean for Employees and Managers?

As companies develop their return to the office procedures, take the time to engage with both employees and managers to develop a human plan for the return in addition to a technology plan.

Tapping Into the Value of Employee Engagement

A director of people analytics explains how to reinvent employee engagement through the use of opinion surveys.

Can You Hear Me? Addressing a Big Meeting Pain Point

During an Enterprise Connect roundtable, six industry execs mulled one of the pesky problems of the virtual meeting experience — resource control.

See All in Employee Experience »