Microsoft teams with Steelcase to offer a digital collaboration solution that team members can roll along with them from one workspace to another. 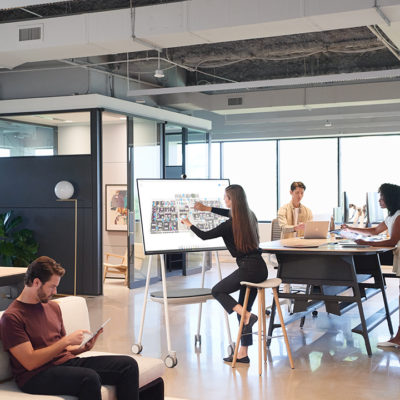 Here at No Jitter, we’ve been thinking a lot about the workspace of the future -- as, no doubt, have many readers. That’s because businesses the world over are on a mission to spur innovation through collaborative work, a mandate driven by the realization for many companies that doing so is critical to competitive success and growth.
That means the way we work is evolving, “and continues to evolve every single day, and it’s not going to stop,” as Panos Panay, Microsoft chief product officer, said last week in a workspace-related announcement made jointly with office furniture maker Steelcase.
During a vision presentation, Panay highlighted Microsoft’s latest-generation collaboration wares -- the Surface Hub 2S product line -- while Steelcase CEO Jim Keane showed the flexible line of office furniture the company designed with the aim of transforming the workspace model from “fixed to fluid” by using movable components. For the digital office, the two companies come together in the pairing of the new Surface Hub 2S with the Steelcase Roam Mobile Stand. Add in the APC Charge mobile battery, and employees can roll their digital collaboration board to whatever workspace they’d like, without interrupting their workflow or needing to find a power outlet.

“This product transforms from a static device -- static, that’s what we know about big screens -- to a mobile, large screen, collaborative device,” Panay said. “It does for the collaboration device what the laptop did for the desktop. It creates that same freedom … [and] that adaptability that’s so incredibly important -- and all you do is unplug it.”
With this latest-generation Surface Hub, Microsoft offers a super-thin, 50-inch screen that it said is 40% lighter than the original product in this series. Other features of the Windows 10-powered device include 4K+ screen resolution; two-element, front-facing stereo speakers; an array of full-band, eight-element microphones; and a 4K-capable camera. Also critical, of course, is integration with Microsoft Teams and Skype for Business collaboration and UC tools, as well as with Office 365, Microsoft Whiteboard, and the intelligent cloud, Panay wrote in his blog post introducing the Surface Hub 2S.
For the first time on a large screen, the Surface Hub 2S lets team members launch apps while communicating through voice and video, said Robin Seiler, GM of Microsoft devices, during the presentation as she touted the device’s team collaboration orientation despite its big visual footprint. “While many of you are used to doing that on your individual devices today, Surface Hub lets you do that on a large screen,” she noted.
The Surface Hub 2S gets much closer to realizing the vision companies have long had to enable remote meetings among far-flung participants. “Over the last decade, we've been very hopeful that remote meetings would solve some of the problems that we have today when we can’t all get into the same room. But honestly, they haven't lived up to that vision historically because true collaboration isn't just audio and video. It's promoting that stronger human connection -- it's letting the full richness of words, passion, and ideas flow through,” Seiler said.
With Surface Hub, Microsoft’s long-term goal has been to bring people together in a way that makes them feel they’re in the same room, even when they’re not, she added. And the S2 enhancements make that all the more reasonable, with one-touch meeting join; the ability to view four tiled faces at up to 1080 pixels, enabling the ability to pick up nonverbal cues; a 90-degree horizontal field of in-room view; 50% faster graphics performance than the original Surface Hub; and interactive screen technology, among other advanced, artificial intelligence-fueled features.
Surface Hub 2S, priced at $9,000, will be available in June in the U.S. In early 2020, Microsoft will begin testing an 85-inch version, revealed last week, with select customers. While the 50-inch Surface Hub 2S is available for use with the mobile stand or wall mounting, the supersized version will be for wall mounting only, for obvious reasons.
If you recall my recent post, “WorkSpace Connect: Uniting People, Places, Technology,” you know why the evolving workspace is top of mind for us: In September, we’re launching a new event created to help enterprise IT, along with peers in A/V, facilities, HR, real estate, and the like, assemble the spaces, identify the tools, and create the roles necessary for optimizing work in the future. As Steelcase’s Keane said in his presentation last week, the future is about cultural, process, and technology change: Don’t let your workspace be an anchor, weighing your company down.