Holoportation! Next Best Thing to Being There?

This visionary technology stimulates the imagination as to the future of business communications. 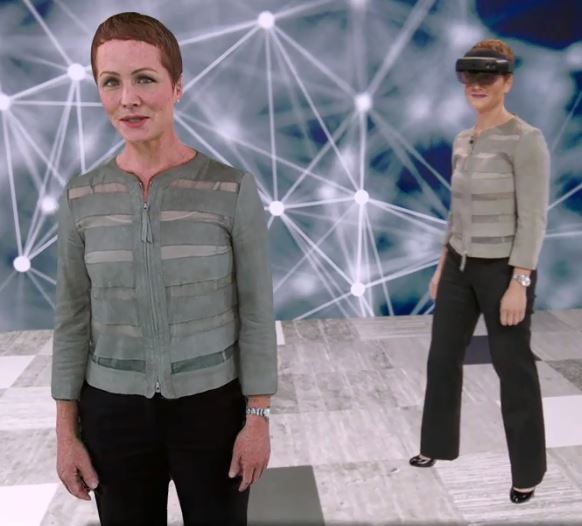 Julia White (at right), Microsoft CVP for Azure AI Marketing, and her hologram, at Inspire 19

As you know from my No Jitter posts, I’m always looking for new capabilities that can transform how businesses work. Personal productivity has value, but the real value producer is in optimizing business processes.
We heard a version of this last week when Microsoft CEO Satya Nadella pointed out during his Inspire 2019 keynote (at minute 2:30) that while tech spend will roughly double from 5% of global gross domestic product (GDP) today to about 10% of global GDP in 2030, the non-tech spend is still 90% of GDP. Since more and more of that 90% will be in the digital, software-driven economy, the real future opportunity is to support that transformation. Of course, that’s music to my ears, since doing so requires attention to enterprises’ and industries’ value chains and usage profiles, which has been the subject of many of my No Jitter posts over the past few years.
But right now, I have to say that the holoportation demo really caught my attention (minute 31:57 in the keynote video, or watch below). It was awesome, to say the least!
Microsoft recorded the demo in advance at its Mixed Reality Capture Studios, using its Azure AI and mixed-reality software. Microsoft used volumetric video capture to create a 3D hologram of Julia White, Microsoft corporate VP, with its demo scenario being to provide a simulated keynote address she would deliver in Tokyo, in Japanese, with no investment in time or travel. Microsoft translated Julia’s voice recording into Japanese, with pretty good synchronization to the visual, by applying neural text-to-speech, an artificial intelligence technology. The hologram was an effective replication of Julia, in the same clothing and with the same body motions. Pretty impressive.
I have a number of questions about this demo, of course. What technology did Microsoft use to record the presentation? What did it use to play it back for the Inspire audience? How does Microsoft intend to advance this technology? Will it enable this for partners and customers? What’s the expected price point and how large of a return on investment will be possible with that price point?
The good news is that Microsoft is doing this, since it has a solid bias toward global deployment of technologies for individuals and for business working groups. That should drive this capability to affordable volume-based pricing, with the software bundled into future versions of Microsoft operating systems and Office 365 software suites, including Teams.
An example of this is another video, watch below, that shows the Microsoft development team packaging holoportation into a standard-sized SUV -- to demonstrate the technology is compact and can work with the current and emerging levels of mobile bandwidth.
We’ll have to see how all this unfolds.
While all of this is still in the visionary category, it really stimulates the imagination as to where this might take business communications. If we were to package holoportation technology into an office cubicle or as decorative modules for a home office, would we find the need to travel to a meeting -- whether around the world or just down the hall -- reduced even beyond what’s possible today with a telepresence video approach? Will our flat-screen video seem like Alexander Graham Bell’s phone compared to this new holographic option?
Of course, this will blend with and extend Microsoft’s existing deployments of the HoloLens mixed reality software and HoloLens headset device. Already, customers are deploying HoloLens into high-value workflows to maximize production throughput, to have expertise instantly available, and to blend information and visualization with the physical working environment. (Any of you “Star Trek: Voyager” fans will remember the Doctor.)
So, this is a great summertime topic. While you laze on the beach, tube down the river, or fish by the stream, you can let your imagination float in the clouds (figuratively) and wonder what the digitized world -- both home and workplace -- might look like 10 or 50 years from now. I’ve done some of this already and find that the possibilities continually outstrip my imagination. Maybe you’ll find even more new frontiers?! So, in Star Trek lingo, “Engage!”